John Piper’s Weird Poetry, and Why We Should Avoid Adding to Hymns

John Piper’s Weird Poetry, and Why We Should Avoid Adding to Hymns August 13, 2018 Jonathan Aigner

Apparently John Piper added some words to the hymn “Great Is Thy Faithfulness” and some people aren’t happy about it. Christianity Today spoke to a few hymnology “experts” for their opinion, and since my phone has yet to ring, I’ll go ahead and talk about it here.

Hymns have words, not “lyrics.”

Piper is a pastor/theologian hybrid who spent decades as Senior Pastor of Bethlehem Baptist Church in Minneapolis. He is probably best known for this thing he made up called “Christian Hedonism.”

I’ll admit that I find “Great Is Thy Faithfulness” to be a generally overrated hymn. I think the melodic drama in the refrain and the soaring final proclamation of the title line win over the singers, while textually, there are a number of superior hymns on the subject of divine faithfulness and human thankfulness.

That being said, I have no real theological problem with this hymn and its relative simplicity. Simple can be penetratingly profound, as is proved over and over in hymnody (Just think of “What Wondrous Love Is This,” “There Is a Fountain,” “Were You There,” etc.). Furthermore, “Great Is Thy Faithfulness” is one of the best hymns from the gospel hymn tradition. I try not to overuse it, but save it for those times when people need the familiar strength of a sturdy old favorite.

But John Piper, speaking to a group of Gospel Coalition women, decided that this hymn written by a Methodist pastor lacked the Calvinistic self-flagellation needed to follow his sermon. And so, this former Wheaton College lit major fixed it by adding two stanzas.

I could not love Thee, so blind and unfeeling;
Covenant promises fell not to me.
Then without warning, desire, or deserving,
I found my Treasure, my pleasure, in Thee.

I have no merit to woo or delight Thee,
I have no wisdom or pow’rs to employ;
Yet in thy mercy, how pleasing thou find’st me,
This is Thy pleasure: that Thou art my joy.

(Remember what I said about Piper’s preoccupation with total depravity?)

I don’t feel that adding to a hymn is the most grievous sin, and a casual perusal of the nearest hymnal will remind you that it’s not a novel idea. Heck, Thris Comlin and company make hand over fist today with that same strategy.

That being said, I think it’s generally a practice that should be avoided, and Piper’s addition is a good example of why.

With Chisholm’s original, we have poetry that springboards from Lamentations 3. While expounding on the biblical text, the original stays true to its context, extolling God’s faithfulness as seen by a lamenting believer. Piper’s first addition strays into Calvinistic conversion testimony, superimposes blatantly Calvinistic language about total depravity, and then brazenly, almost didactically, launches into a second added stanza that can only be called a primer for Piper’s own Christian Hedonism. Suddenly, “Great Is Thy Faithfulness” becomes “Great Is My Sucky-ness” and finally “Great Is My Happiness.” Neither of these textual paths flow well into the hymn’s refrain, a steadfast, resolute proclamation of new mercies, the promise of provision, and unmerited favor.

Especially with hymns that are beloved by most who sing them, any impact that author desires to add will likely be lost on a congregation. They know and love the hymn, many have committed it to memory, but now unexpectedly they must shift gears and relearn what their heart has sung for many years. Practically, this might be disastrous.

Liturgically, I’m not inclined to bow to practicality or kowtow to emotionalism, but we have to be honest here. The strength of this hymn lies in its oft-repeated exclamation, “Great is thy faithfulness.” That’s the pinnacle, that’s the gist, that’s the essence meant to lift hearts out from temporal struggles and frailty to the constant Rock that is higher than I. Surprising a congregation is not an effective way to do this.

This hymn is still months away from being public domain. Even so, there is no real ethical violation in changing the words for a conference, but it seems like cheating to borrow another’s work and adapt it for your own purposes.

If one feels the need to add onto a hymn in order to make it work in a certain liturgical context, it’s just the wrong hymn. You need to choose another, or if the creative juices are really flowing, write a whole new one. Obviously, “Great Is Thy Faithfulness” wasn’t the perfect hymn in John Piper’s mind. That’s okay, and there are many others from which to choose. But thinking through this hymn with Piper’s addition gives the impression that he is simply trying too hard. So put down the hammer and the square peg, and go looking for the round one.

I don’t think it will happen here, but the worst thing that could come of adding stanzas to hymns is that they actually stick. The best example of this happening would be with the final stanza of Amazing Grace, which weakens it considerably from Newton’s original.

Perhaps what we need to do is to avoid the word “old” when we discuss hymnody. “Hymns” is not an ancient genre, but an ongoing collection that is still accepting submissions. Let those stand that are already written, and give the gift of beautiful, rich, strong new texts to the singing congregation. 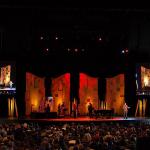 August 10, 2018
Farewell, Willow Creek: Where the "Regular" Churches Can Go From Here
Next Post

Evangelical
Hymns of Faith and Hope: As with Gladness...
Ponder Anew

Evangelical
Hymns of Faith and Hope: What Child Is...
Ponder Anew
TRENDING AT PATHEOS Evangelical