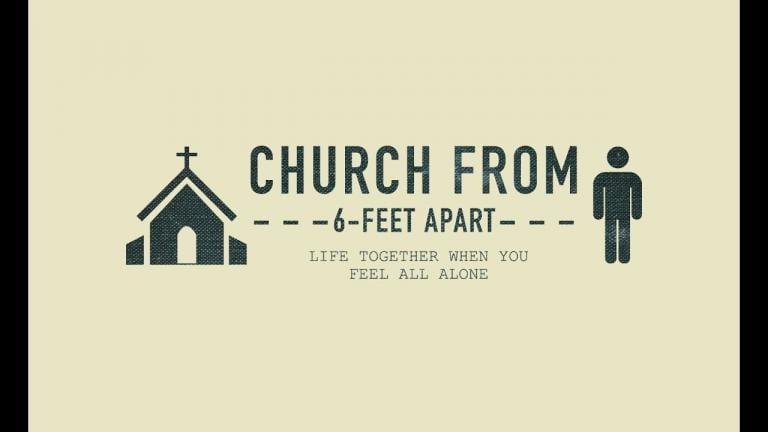 Those of us who are church musicians have probably seen our fair share of online worship services over the past weeks. The parade of examples in my Facebook feed is seemingly endless. While many of these churches started out with just one or two musicians in an empty church, it seems like an increasing number of churches are featuring small ensembles with singers and instrumentalists keeping that supposedly magical six-foot distance between them.

Another church in my area featured several singers with a pianist and a hired brass quintet on Easter.

Another uses a quartet evenly spaced around a piano.

These are just a few examples. Look around a bit, and you’ll find many others trying the same kinds of techniques while giving the impression that they’re following the letter of the social distancing requirements. But we’ve been told over and over again: keeping six feet away from others is not enough to keep you safe, since many infections occur by touching the face with contaminated hands. And while maintaining the six foot radius might reduce your risk, it stands to reason that the reasoning behind the guideline assumes that the other people are not consistently singing their faces off.

According to Vincent Racaniello, Professor of Microbiology and Immunology at Columbia, speaking, singing, and normal breathing produces aerosols, which in an infected person, are laden with virus particles. While the largest of these droplets don’t travel very far, the smaller droplets are a different story.

What happens when the singers all file out of the chancel using the same path, even while keeping physical distance from each Just yesterday, a respected pastor and liturgy expert shared a study published last week in the New England Journal of Medicine, which found that “aerosol and fomite transmission of SARS-CoV-2 is plausible, since the virus can remain viable and infectious in aerosols for hours.”

Think about it: aerosols produced from the breathing, talking, and singing of an infected person can remain suspended in the air and infectious for hours.

Racaniello recalled this incident or influenza transmission from the 1970s:

“The importance of aerosol transmission is illustrated by an outbreak of influenza aboard a commercial airplane in the late 1970s. The plane, carrying 54 persons, was delayed on the ground for three hours, during which time the ventilation system was not functional. Most of the travelers remained on board. Within 72 hours, nearly 75% of the passengers developed influenza. The source of the infection was a single person on the airplane with influenza.”

April 22, 2020
Hymns of Hope and Comfort: Shepherd of Souls, Refresh and Bless
Next Post

April 23, 2020 Hymns of Hope and Comfort: To God Be the Glory
Recent Comments
0 | Leave a Comment
Browse Our Archives
Related posts from Ponder Anew