His Name Was Jon Daker, and May He Rest in Peace 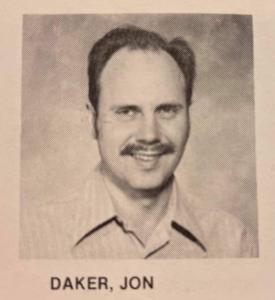 For most of you, he needs no introduction. If you’re new to the internet, let me tell you how the world came to know Jon Daker.

Peoria resident Reva Singley Cooper Unsicker taught voice, piano, and organ lessons for some six decades until her death in 1995 at the age of 80. For most of those years, her studio recitals were held in the sanctuary of the First United Methodist Church in Peoria where she attended.

Here is Reva in the 1970s with her second husband. 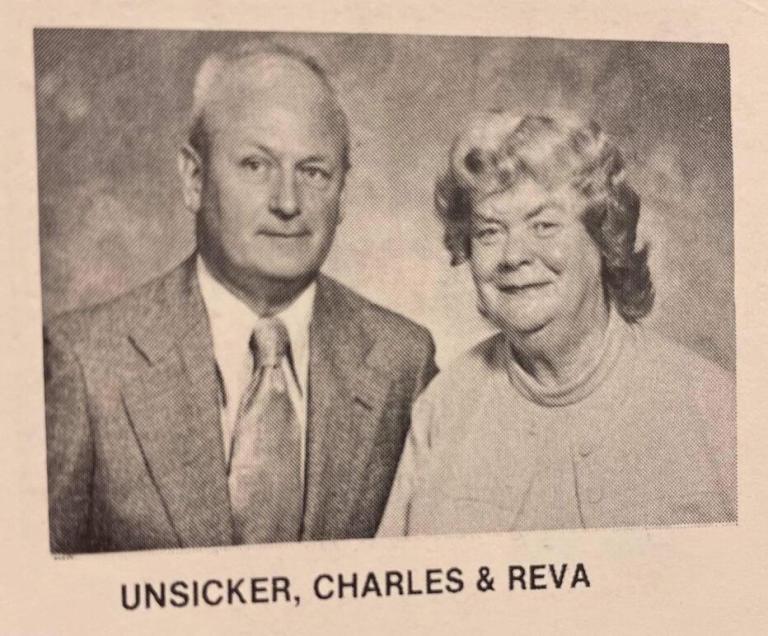 I have never found out how this happened, but at some point in the 80s she was offered the chance to broadcast her recitals on local public access TV station. Reva jumped at the chance, which according to one source, elicited a collective sigh of relief among the church staff, as Reva was, shall we say, a bit particular about these recitals.

Nobody was ever supposed to see them again, but God in His mercy had other ideas. While a few brief clips from others remain, much of one 1990 recital is preserved on YouTube.

On Easter Sunday 2009, my life changed completely when my friend Todd shared the Jon Daker video on Facebook. (He is usually credited as “John,” but there was no “h” in his first name, perhaps to distinguish him from his paternal grandfather, John Graham Daker.)

I’ve laughed, cried, and cringed through many, many viewings since that wonderful, wonderful day. I’ve since introduced Mr. Daker to everyone I love, or even tolerate. It is, in my opinion, the greatest video in the history of the world. The Jon Daker video is enough to justify the existence of the internet. Everything about it is classic. Reva’s nearly incoherant introduction, her expeditious accompanying, Jon’s pleasant voice and his ability to maintain his composure, and the brilliant mashup of the Wesley hymn (very popular nowadays) “Christ the Lord Is Risen Today” with “That’s Amore.” If you haven’t seen it before, here it is. Stay tuned through the brief clip of Michelle Caseyaneye at the beginning.

There were others in the lineup, George Stanton, Margie Hicks, Bob Spencer, Pearl Gross, and their videos are internet gold in their own right. But Jon was the star that day, and forevermore, world without end, amen.

Years ago, I wrote a post about the beauty of the church choir. I included the Daker video in one of my points as an example of the good folks who make up these ensembles. My point was basically that Mr. Daker and any of his friends would be welcome in my choir any day of the week. I was shocked to receive a comment from one of the pastors at the First United Methodist Church in Peoria, Illinois, which Jon, Reva, and many of the others attended.

While the pastor used his best manners, he essentially told me that he was sick and tired of people like me sharing this video in an attempt to humiliate and embarrass Jon, and that my sharing the video in my post was in bad taste. I responded with my earnest disagreement.

You see, in a world plagued by sin and evil, in which churches increasingly have no room for church musicians without commercial appeal, Jon Daker represents hope, joy, and faith. Here is a regular guy who has managed to lift the spirits of millions thanks to his love of singing and a willingness to crash and burn with dignity.

And while there were some that made fun of him, a cult following of fans emerged, including some Peoria locals who befriended him and paid him visits in the publicly-funded assisted living home where he lived after his parents and siblings passed away. One in particular, a woman named Heather, stayed with him and advocated for him until the end. Not only did Heather love and care for this man with whom she shared no relation, but through social media she allowed those of us who already loved the legend of John Daker to get a glimpse at the real Jon Daker. And the stories that emerged from these visits painted a picture of a kind, gentle man who loved Jesus and faithfully served his church.

One source who grew up at FUMC (This person and her husband were actually married by the one and only Rev. Bill Jones!) remembered sitting two pews in front of the Dakers, Jon, father Burton, mother Adeline, and sister Penny. They were by all accounts lovely, salt-of-the-earth people who enjoyed singing REALLY loud. 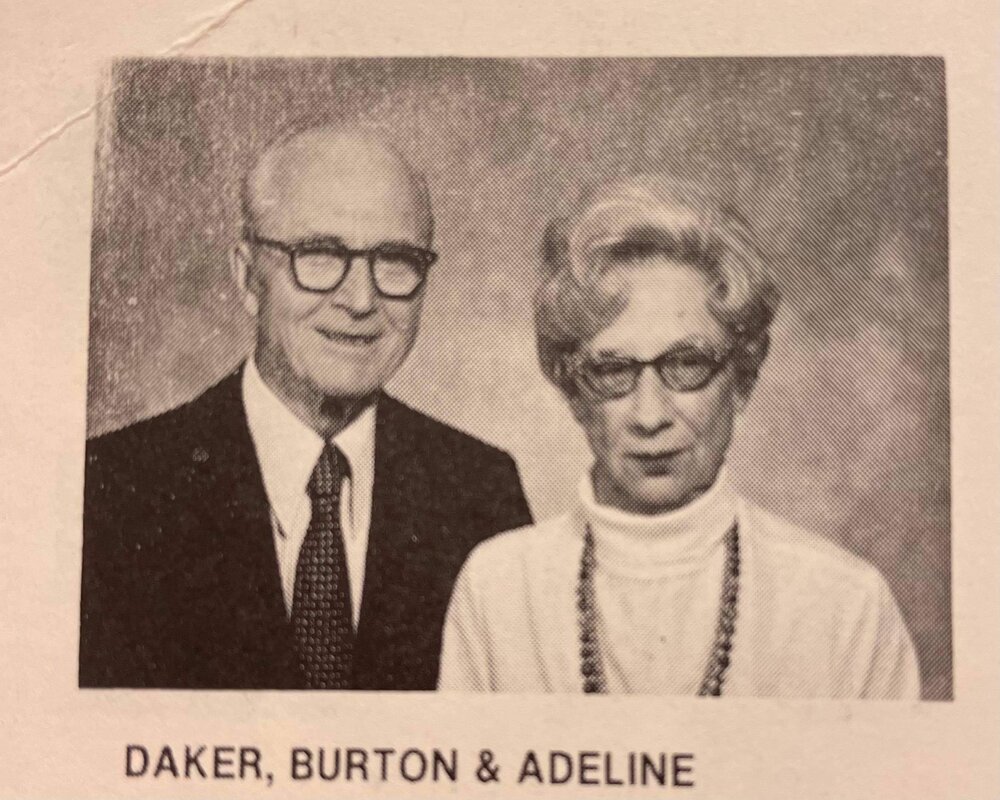 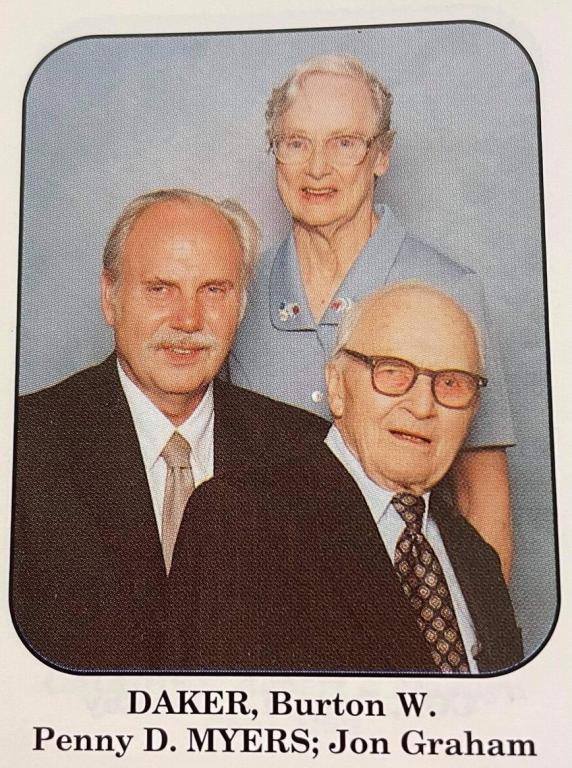 Jon was preceded in death by all of them, as well as an older brother, Burton K. Daker. In addition to other family and friends, he is survived by a countless number of adoring fans.

At this moment, Jon has joined the saints singing before the throne of God, where the words no longer evade his lips, and the accompaniment no longer leaves him behind. He has fully experienced the scene that Charles Wesley captured in another one of his stanzas:

Soar we now where Christ has led, Alleluia!
Following our exalted Head, Alleluia!
Made like him, like him we rise, Alleluia!
Ours the cross, the grave, the skies, Alleluia!

May he rest in peace, and may his memory outlast the internet.

Remember thy servant, O Lord, according to the favour which thou bearest unto thy people, and grant that, increasing in knowledge and love of thee, Jon may go from strength to strength, in the life of perfect service, in thy heavenly kingdom; through Jesus Christ our Lord, who liveth and reigneth with thee and the Holy Ghost, ever, one God, world without end. Amen.

January 21, 2022
A Letter to Christians Who Can't Take the Sunday Production Anymore
Next Post

April 21, 2022 If Worship Is All About the Heart, Yours Needs Some Good Liturgy
Recent Comments
0 | Leave a Comment
Browse Our Archives
Related posts from Ponder Anew