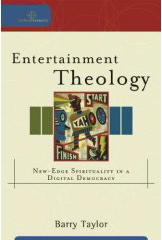 Towards the end of his latest book, Entertainment Theology: New-Edge Spirituality in a Digital Democracy, Barry Taylor offers a “new attitude” toward the process of doing theology. Recognizing the harmful “God-talk” that has preceded and continues to surround Christianity today, he writes, “At first, I was tempted to recommend a theology of silence, because I fear we have spoken too much.” Thank God he did not. Taylor’s Entertainment Theology is one of the most insightful analyses of contemporary culture and the state and fate of religion in it that I have read in quite some time.

Taylor is concerned with three interwoven ideas:  (1) the implosion of modernity and the rise of the postmodern/postsecular, (2) the spiritual condition of popular culture that signifies a return to God, and (3) a vision for Christianity in this current milieu and for the future. Central to Taylor’s argument is the fact that we are, and indeed have been for quite some time, living in a post-Christian world in which traditional, authoritative religious institutions no longer primarily influence a person’s spiritual or religious experiences, if the ever did.  Far from implying the extinction of these institutions, Taylor argues that they face competition from the surrounding popular culture and must fashion new ways of interacting with this culture and embodying the gospel of Christ, lest they perish. Taylor’s smooth interaction with all forms of popular media from novels to films to television programs to music videos reveals a culture not of sin and evil, though that certainly exists, but a culture fashioning its own form of spirituality and God-talk that Christianity must take seriously.

We will quickly recognize this new-edge spirituality about which Taylor writes, because we have no doubt heard confessions of it from friends, family members, or celebrities.  Taylor argues that the confession, “I’m spiritual, not religious” has become a religion in and of itself in this postmodern, postsecular context.  Traditional forms of religion, specifically Christianity, have suffered in both membership and effectiveness for not taking such a confession seriously.  Taylor urges us not to condemn such talk as surface emptiness but to take it seriously for what it is, a sincere yearning for a connection with the sacred.

A key component of Taylor’s text is his assertion that the categories that modernity employed to define, order, or make sense of the human experience have rather quickly broken down. They no longer, if ever, encompass all the varieties of human experience. We see the continual frustration with these terms on a daily basis as politicians and voters try to move beyond partisan politics. We have seen this in a recent review of Adam Hamilton’s Seeing Gray, just one of the many textual examples of Taylor’s argument.

If modernity’s labels have already warn off so quickly, Taylor is certainly wise enough to avoid creating new ones that would expire even more rapidly.  Rather, he simply seeks to describe the prevailing mood(s) in our societies. His overarching description,“Entertainment Theology,” highlights the “evolution of theology from a didactic or studied approach to the question of God to a more global communal conversation about the sacred in general.”  This theological evolution relies on three movements, “the reenchantment of Western culture, the rise of postsecular society, and the democratization of spirit.”

The reenchantment of Western culture signals that God is making a comeback, although in ways that religious institutions might be resistant to or simply unaware of. Fueled by new understandings and experiences of “time, space, bodies, and governance,” this reenchantment takes the form of a heightened pluralistic spirituality.  Globalization, not just Western colonialism, has resulted in increased access to cultures and forms of religious/spiritual expression heretofore unavailable to a midwestern Christian, for example.  New media technologies, specifically the internet, fuel these new experiences of time and space, shrinking the distance between cultures worlds apart.  This reenchantment and technologically fueled globalization also results in the democratization of the spirit, the “attempt to put desire in its rightful place, in dialogue and communion with the sacred.”

Taylor recognizes that megachurches might serve as the pinnacle of religious consumerism, a frequent shopping for God that defines much of contemporary religious experience.  Not only can believers pick and choose what church they want to attend, megachurches also provide them with choices for various types of worship experiences, service opportunities, and children’s programs.  However, Taylor argues that this religious consumerism is not the end-all-be-all of the postmordern religious experience but is rather just the tip of the iceberg.

Taylor begins to dig deeper in his understanding of Entertainment theology as “ideas about God that emerge outside of previously legitimized environments and structures of mediation.” He notes four areas worth explaining.  (1) Zen Culture signifies a blending of Eastern and Western ideas and religious expressions that emerges from globalization and the democratization of the spirit.  (2)  The Next Enlightenment signals the age of the rational mystics that embrace a more holistic view of life.  In this age, spirituality, not religion, is in the ascendancy.  (3) Retrolution can be witnessed in the postmodern obsession with all things Gothic.  Taylor urges us to view this Gothic retrolution as a means of dealing with uncertainty, a dominant contemporary cultural concern, by presenting aspects of the present and the future through past terms.  The Gothic celebrates “mystery, the mysterious, the grotesque and the desolate,” all images of uncertainty to be sure.  Taylor notes that the Gothic is especially concerned with the sublime and that this sublime landscape is mediated mostly through cinema.  (4) Resistant Communities comprise his final area.  These signify the implicit postmodern threat of fundamentalism mentioned above.

Like Dorothy, Taylor recognizes that postmodern Christianity isn’t in Kansas any more.  Things have changed.  Yet far from being pessimistic, Taylor is hopeful for Christianity’s future and, as such, has several pieces of advice for the future of the faith.  Christianity must finally embrace its plurality on an institutional and personal level.  Taylor aruges that we must “come to the end of the need to be ‘right,’ to be certain that [we] hold the whole truth.”  This new vision is one in which, again, a focus on spirituality overrides a concern for religion.  Taylor claims that we now have not a Christian religion, but rather Christian spiritualities.  This is not concerned with how Christianity looks, but rather how it addresses the wider culture’s spiritual hunger and journey.  Taylor writes, “The general trend seems to be engaging in desperate attention-seeking practices as if to say, ‘look at us, we do count, we are cool.’  But as any arbiter of cool will tell you, ‘cool’ cannot be claimed, only conferred.”  I wonder if this isn’t a thinly veiled jab at hipster mega-churches popping up across the country.

Rather than being cool, Christianity must be relevant.  The main ways in which it can be so will be through an identity shift, a new typology for missional theology, and a new encoding of the Christian message, all of  are in desperate need of imagination.  Taylor writes, “The shift in times demands a new reiteration of the message, one that is a pertinent and timely iteration of the timeless Christ story for our cultural context.”  Thankfully this iteration can come from both inside and outside the church as he asserts that “theology is no longer a specialized field to be left to those deemed qualified.”  As soon as the church fully embraces this, there can be no end to its effectiveness in again being a relevant location for theological education and spiritual formation.  There is much encouragement here for artists and lovers of art to get involved in the new spirituality.

Entertainment Theology is truly an enjoyable, accessible text.  Fans of pop-culture will be amazed at the diverse examples he shares from The Da Vinci Code to Donnie Darko.  Like his assessment of the state of religion today, Taylor’s interactions with pop-culture, scholars, and theologians is de-centralized, or rather de-Westernized, drawing from thinkers from all corners of the world and a host of media. As such, his text is stronger for it and our reading experience richer.

'The redeeming effects of the Christian...
slacktivist
Related posts from Pop Theology