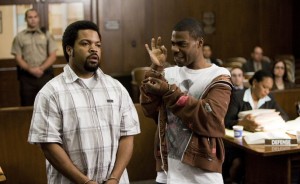 I’ve been keeping up with Bad Movie Monday viewing, even if I haven’t been faithful in writing about it, save for my recent post on Bella. Last week, I took a shot on First Sunday, the latest in post-Friday spin-offs. First Sunday takes the urban comedy, a la Barbershop, and adds a heavy religious flair. Much to my surprise, it actually works, and bears out a rather progressive theological message.

First time big screen director David E. Talbert’s First Sunday tells the story of two down-on-their-luck guys, Durell Washington (Ice Cube) and LeeJohn Jackson (Tracy Morgan) who rob a church to remedy their financial crises. Durell needs $17,000 to keep his ex-girlfriend from moving to Atlanta and taking their son with her. LeeJohn needs significantly more money to cover a host of debts, not the least of which is a botched chrome-wheeled wheelchair delivery. The church robbery goes wrong fast and gets mired in a hostage situation that uncovers some wrongdoing taking place within the church as well.

Though much of First Sunday is formulaic urban comedy, I appreciated the religious setting and its ability to allow for a progressive theological statement amidst well-worn social observation. Durell and LeeJohn are harmless, if dim, “criminals.” They are not the thugs that prosecutors and judges make them out to be. As LeeJohn says, “I’m not a bad man, I just got in some bad situations.” First Sunday does an adequate job of presenting the personal and institutional ingredients to a life of crime. Talent with no purpose + an inability to find meaningful employment = bad decision making.

Most critics (nearly all) trashed First Sunday. However, A. O. Scott of The New York Times gave it a positive, if cool, review. He also cited a major discrepancy in the entertainment business today with African American artists like Talbert and Tyler Perry creating highly popular and successful work (plays, films, television programs, musicals, books) that remain nearly invisible to white media. While, I do detect an appreciation of Perry’s work among conservative Christian circles of all races, particularly for his clean humor and morally uplifting message, it certainly has not reached the popularity of, say, a Judd Apatow production.

First Sunday (98 mins.) is available on DVD and is rated PG-13 for language, some sexual humor, and brief drug references.

God Is Not a "He". The...
Thoughts of a Modern Celtic Wanderer
Related posts from Pop Theology