At SXSW2017: May It Last: A Portrait of the Avett Brothers 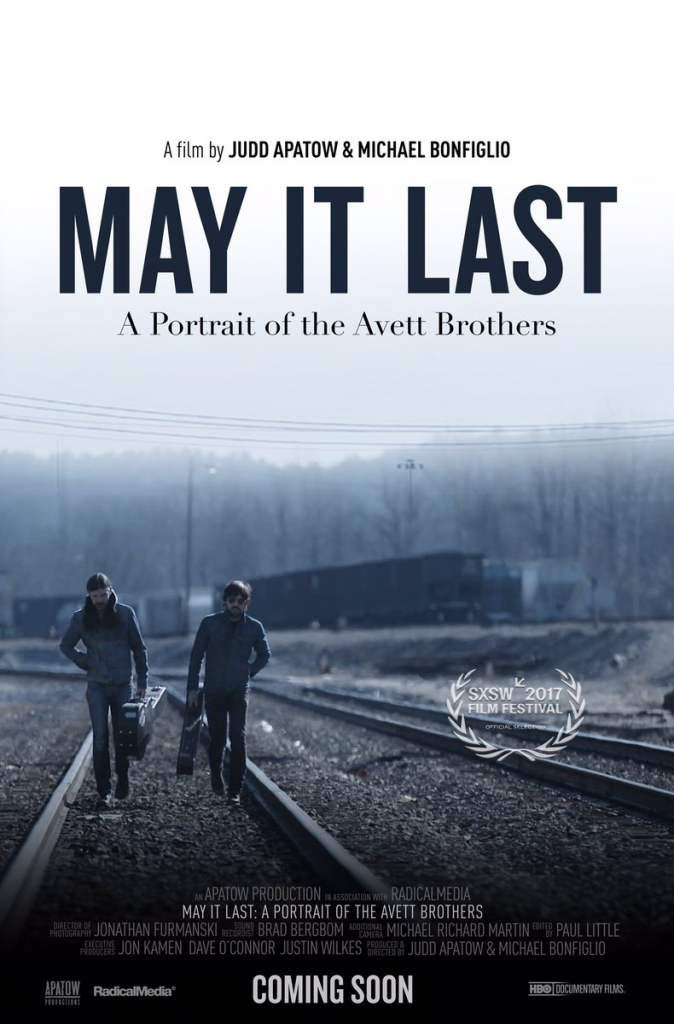 The Avett Brothers are an emotional band – but they are neither saccharine nor maudlin. They do not write songs to feign sentimentality or play at the role of troubadour. They are emotional in the sense of confession, in the sense of honesty, in the sense of moral duty – if not for the ones they love then at least for themselves. They are deeply personal without being obscure or confessional while remaining ever universal. In directors Michael Bonfiglio and Judd Apatow’s new documentary, May It Last: A Portrait of the Avett Brothers, we are given a look into the lives of two siblings who have created a family of musicians through the earnest cultivation of such emotive expression. This documentary is not only a testament to Scott and Seth Avett but to the very idea that the creative life can be one of love, growth, and support.

As a band, the Avett Brothers have defied easy definition while yet remaining immediately identifiable. They are a fusion of bluegrass, roots country, and rock & roll. Beyond all of these elements, however, they are first and foremost Southern. They are Southern in a classical sense – rustic and rural, God wrestlers as much as God fearers, bound by a deep love for family and a deeply bred sense of pride. This Southern identity gives them the ability to project warmth and vulnerability, becoming an invitation to intimacy that their fans know well. Their live shows feel like a party you can’t believe you were invited into and their stage banter comes with a twinkle in their eyes like you were old friends. It’s not an act, however, it’s just who they are and this is exactly what this documentary seeks to reveal.

Calling this film a portrait could not be more apt. This is not the usual A to B career arch or the tale of hard fought creative existence – this is a picture painted to commemorate a family. Chronicling the creation of their newest record, True Sadness, this documentary functions less as a document of the record and more as a thesis for the band itself. The film opens with a quote from their grandfather, a Southern preacher whose presence they’ve felt their whole lives without ever actually knowing. They share his philosophy that how you feel about things is what matters and that it’s important to share with others no matter what. An album about love, loss, and familial devotion, True Sadness provides a helpful template by which to explore the character of their lives and the trajectory of their careers.

From their early days in the post-hardcore outfit Nemo (A+ for namechecking beloved Texas rockers At the Drive-In) to their current need to explore textures beyond their well-worn brand of energetic folk rock, the film does a great job presenting the texture of their musical evolution. Where it truly shines, however, is looking behind the music at the lives they live and who they have chosen to live them with. Naturally, we are first treated with a look at a brotherhood that is both typical and enviable. Although they readily admit to the sort of mindless torture and tomfoolery that siblings historically enjoy, we are offered a glimpse into the sacredness of that bond as well. As two highly creative and motivated brothers, this bond became an incredible partnership mindful of each other’s strengths and weaknesses, devoted to pushing one another forward.

The rest of film is dedicated to the journey of the brothers as they build their family, bringing on bassist Bob Crawford and cellist Joe Kwon as well as an entire motley crew of musicians and partners who range from hometown friends to Hollywood actresses. But, whether they have known them their whole lives or only a few years, each person relates tales of an atmosphere of love and support, centered with the brothers and emanating throughout the group. Current fiddler Tania Elizabeth notes particularly how rare and how amazing it is to see such a dynamic in the entertainment world and the documentary does a phenomenal job exploring its manifestations.

The story of Crawford and his family, in particular, reveals much about this dynamic. Hearing the tales of how the band rallied not only behind the Crawfords but remained right alongside them when his young daughter was diagnosed with a brain tumor was incredibly moving. It is moments like this – be the birth of a child, the difficulty of divorce – that give this film a striking humanity. You get a real sense of how deeply they care for one another and the ways in which this passion – this compassion – influences their creativity and drives their careers. They are not writing loves songs for romantic comedies, hoping to get the next big hit – they are writing love songs because they are in love, ruminations on time because they are fathers, earnest celebrations of life because they are having a hell of a time, together.

The music in this film is, of course, incredible. It is a joy to see the usual fare of musical documentaries – the early footage and the backstage banter. But, if you are a fan of the Avett Brothers’ work, you will be treated to an unflinching intimacy that is remarkable to behold. Rather than simply cut in and out of recording sessions, offering only snippets of songs here and there, the film instead takes a long view look at several tracks and follows them from their early construction to either their live debuts or the actual recording of the entire song. When this happens, it is presented with enchanting emotional effect, offering the audience not only a peak into their creative process as collaborators but into their lived experiences as brothers. Of particular joy to me was watching the writing of standout track “I Wish I was” where we see where the brothers have a playful back and forth of creative ideas and ruminations on the concept of devotion, eventually constructing one of the most disarming love songs they’ve ever written.

The work of Bonfiglio and Apatow cannot be overstated here. Their watchful eyes paint a picture that is naturalistic and inviting, creating a real sense of looking into their lives. I may be a bit biased as a longtime fan but they have chosen a remarkable band to explore and revealed the type of people you can only hope your heroes might be. Their lives are not greater than, marked by impossible character or marred by ridiculous scandal – they are simply lives lived honestly or, at least, as honestly as they can be. As husbands, as fathers, as brothers and friends, the Avett Brothers are an all too rare example of wholesome but realist artists who are unflinching in their honesty. Getting to know the brothers and the people in their lives is a treat through and through because, like their music, it is heartening and edifying to share in each other’s emotional journeys. We do not grow in empathy simply because we imagine what the other’s life is like, we grow by becoming a part of their lives. Without spoiling much here, the credits of the film reveal two more songs are that absolutely devastating in their presentation of raw, familial contemplation.

May It Last was picked up by HBO so be on the lookout for their eventual announcement. If you’re at SXSW, you can check out the film on Friday, March 17 at 3 pm at the ZACH Theatre. And, one more great tidbit revealed during the Q&A – there will apparently be an ‘Avett Family’ Gospel record coming out in the coming months. If there was ever a perfect cherry to top a film whose meditations feel downright spiritual, it was that.