A Sacred and Secular Negotiation 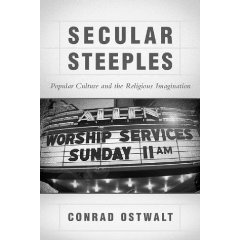 In the closing minutes of his new documentary, Religulous, Bill Maher transitions from an agnostic point of view to an atheistic one.  He moves from saying, “I preach the gospel of I don’t know,” to saying, “For humanity to live, religion must die.”  Such a transition signifies Maher’s narrow-minded view of religion and also his misguided understanding of secularization.  Maher believes that the eradication of religion will help humanity flourish and put an end to many of the conflicts that divide us.  This, one could argue, is one example of a type of secularization theory that has held sway in academic and religious thought.  Thankfully, that idea, and its hold on our thinking, is losing its grip.  Conrad Ostwalt’s book, Secular Steeples:  Popular Culture and the Religious Imagination, represents a much-needed, fresh way of looking at the sacred, the secular, and the complex notion of secularization.

In his introduction to and throughout his book, Ostwalt debunks the notion of secularization as the death or disappearance of religion.  A simple observation of contemporary American culture reveals a wealth of (non)institutional religious expression.  However, as time has progressed, these institutions have lost the authority they once had over social, political, religious, and theological affairs during the Middle Ages, for example.  Ostwalt claims that popular culture, for one, represents the greatest challenge to institutional religion’s control or power by offering its own set of values, morals, ethics, etc.  Not surprisingly, popular culture speaks secularly and sacredly; the latter given traditional religion’s falling out of favor with much of the larger society, even religiously or spiritually minded people.  Rather, Ostwalt sees secularization as a dance…a negotiation…between the sacred and the secular that takes place in both our communities of faith and popular culture.  In Secular Steeples, Ostwalt examines three “locations” of this idea of secularization:  place, text, and image.  Put more specifically, he analyzes this understanding of secularization and its effect on sacred spaces, literature, and film.

In all of these instances, Ostwalt sees secularization as a two-way street.  Popular culture is becoming more sacred and religious institutions (many of them) are becoming more secular.  Indeed, Ostwalt argues that Christianity has been dealing with secularization since its inception.  Today, the challenge of secularization for a religious organization is all about relevance.  Much of this has to do with method which, in turn, affects the message.  Ostwalt highlights what many faith communities face today:  how do we present an ancient message to a postmodern audience, and, moreover, an audience that is increasingly inundated by popular culture and technology?  As a friend of mine put it recently, “How are we a people of the Book, when books are going the way of Kindle?”

Just because religious institutions are losing their authority does not mean that people are losing their quest for or desire for the sacred.  They then find it, in part, through various elements of popular culture:  monuments, literature, films, music, etc.  As people move away from more traditional religious expressions of the sacred, they begin to create and consume sacred forms of popular culture, or at least forms of which that express sacred themes.  Themes once dealt with primarily by religion like redemption, death, the afterlife, or even the apocalypse are now recurrent themes in popular culture products. 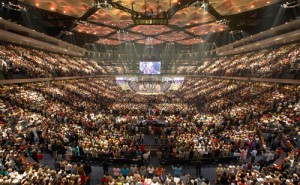 After his introduction, Ostwalt discusses the secularization of sacred space and the sacralization of secular space.  For the former, he analyzes the megachurch movement in America and parts of Europe.  For the latter, he explores Love Valley, North Carolina, an intentional utopian community.  The megachurch movement represents the secularization of sacred space as churches become one-stop shopping for congregants and potential converts.  These churches offer everything under one roof, shopping, worship, day care, entertainment, education, self-help groups, and the list goes on.  In each of these programs, they must reckon with and either appropriate or reject elements of the secular.  Ostwalt argues that the primary evidence of secularized sacred spaces in megachurches is worship.  Big screen televisions, rock bands, drama, video clips all now contain the message that was once packaged in a sermon and a few hymns (with or without the organ).  To think that this does not affect the message is terribly short sighted.  As Ostwalt asks, “[…How] can a church maintain a prophetic role in society if its priority is to satisfy the client” (65). 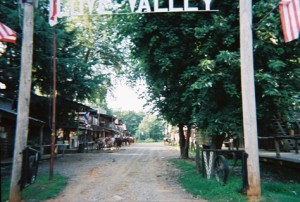 The sacralization of secular spaces, for Ostwalt, can most readily be seen in Love Valley, North Carolina, a utopian community founded by Andy Barker as a refuge from the wider (polluting?) culture.  Barker founded Love Valley as a model after the main streets in so many Westerns or idyllic American films.  No cars are allowed as horses are the only acceptable means of transportation in the town limits.  Visitors are also allowed to carry handguns or rifles, all of which must be loaded.  Thus, there is an element of danger even in this utopian setting.  Ostwalt’s discussion of the sacralization of secular spaces might have benefited from a broader analysis and perhaps the inclusion of sports complexes and museums.

Next, Ostwalt talks about the secularization of a sacred text, the Bible, and the sacralization of secular literature through the works of Clyde Edgerton, Randall Kenan, Amy Tan, and Lee Smith.  Ostwalt claims that more “liberal” Biblical scholarship (historical or form criticisms, for example) and the conservative fundamental claim of Biblical inerrancy have rendered this sacred text secular.  They both, in their own ways, de-mythologize and de-mystify scripture, replacing the quest for Truth (or truths) with the search for factual claims.  Again, as traditional religious institutions and texts lose their authority, secular texts step in to “fill the void.”  Writers like Tan and Edgerton engage traditional forms of religion (Southern evangelical Christianity or Buddhism, for example) and offer fresh representations or critiques of it.  Focusing on three writers from the same region, the Southeast, Ostwalt reveals the sacred diversity of Edgerton, Smith, and Kenan’s work.

Finally, and perhaps most importantly, Ostwalt moves to a discussion of the image in a postmodern, secularized culture.  Film, a truly postmodern creation, has spent its entire existence caught between this sacred and secular negotiation.  To narrow this very broad history, Ostwalt looks at contemporary apocalyptic films by both religious and non-religious filmmakers to see the secularization of the sacred and the sacralization of the secular.  His findings are fascinating. 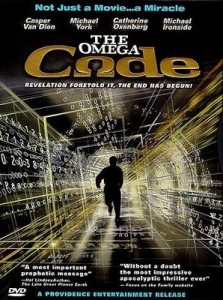 Religious apocalyptic films like Left Behind, The Omega Code, Meggido:  The Omega Code II all reflect conservative, evangelical interpretations of the apocalypse that attempt to image the descriptions in Revelation.  The antichrist, global unity, a final cosmic battle, the rapture, tribulation…they are all here in some form or another leading up to the final showdown between good and evil in which God prevails and ushers in a new world.  The secularization of this sacred story takes place quite simply in the presentation and packaging of these films and the subtle changes that the filmmakers are forced to make in the process of making a film. 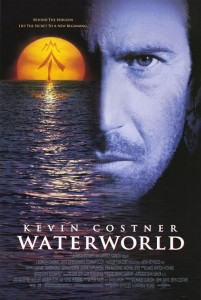 On the other hand, secular apocalyptic films use a sacred concept but tell a completely different story, and, as such, offer interesting critiques of one Christian view of the apocalypse.  Films like Waterworld, 12 Monkeys, Armageddon, and Deep Impact present worlds in which God plays a smaller, if any, role in the apocalypse.  In these worlds, humanity is responsible for the apocalypse be it through global warming or nuclear destruction.  Occasionally alien invaders provide the apocalyptic impetus.  Yet, unlike the sacred apocalyptic story, mankind is able to prevent or overcome the apocalypse through technology and socio-political unity, a sign of the antichrist in the Christian depiction.

Ostwalt’s book is a highly important and entertaining text for these highly antagonistic times.  Ostwalt brilliantly reveals the truth of the interconnectedness of the sacred and the secular.  While Ostwalt hammers home his secularization theory a bit repetitively, the repetition helps convey this reality and its prevalence in our contemporary culture.