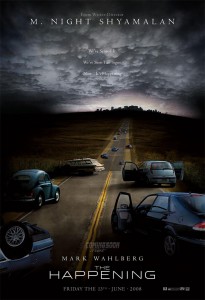 It’s been a while since my last bad movie Monday, what with the start-up of Monday Night Football and Heroes.  With a little extra time on my hands this week, I picked up a free rental of M. Night Shyamalan’s latest film, The Happening (2008). 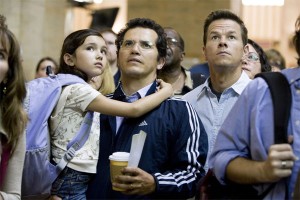 In The Happening, M. Night Shyamalan tries to cash in on the environmental threats and fears that plague our planet.  At the start of the film, people in Central Park begin acting more than a little strange.  They first begin talking confusedly, they lose all sense of direction, and they finally commit suicide, all in a matter of minutes.  As the event spreads, news sources and government agencies are convinced that it is a terrorist attack, some sort of chemical onslaught.  Officials order the evacuation of New York City, and high school teacher Elliot (Mark Wahlberg), his wife Alma, (Zooey Deschanele), his colleague Julian (John Leguizamo), and Julian’s daughter Jess (Ashlyn Sanchez), flee to Julian’s mother’s house in Pennsylvania.  Along the way, they learn that the phenomenon has spread throughout the northeast, and as the event claims more and more lives, Elliot believes he is arriving at the cause of the attack.  The earth (or at least the northeastern portion of the U.S.) is rebelling against its inhabitants.  Trees and plants are omitting chemicals that cause these psychological meltdowns and, on top of that, are communicating their plan of attack through the wind to find significantly sizeable (more than three?) populations to attack. 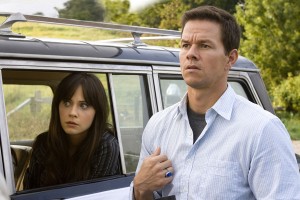 There seems to be an interesting concept here and a potentially creepy film, but Shymalan did not sufficiently draw them out.  Save for John Leguizamo, the casting was just plain wrong.  While it is hard to watch Mark Wahlberg after Andy Samberg’s SNL send-up, even without “Mark Wahlberg Talks to Animals,” it would be hard to take a lead character that wears a mood ring (seriously) seriously (if it’s blue, does that mean he’s calm?).  Zooey Deschanele, otherwise great in so many roles, just seems too lost, even for a character who is not really supposed to know what is happening.  Her innocence, a plus in other films, makes her laughable here.

While most critics also noted the failed tone of the film, others noted that nothing really happens in the film or that we never learn the cause of the “happening’s” beginning or end.  The problem here is that stuff happens, but we don’t really see enough of it.  The film could have been much creepier and a bit more gruesome had Shyamalan included shots of more disturbing suicides.  Most of the deaths take place off-screen or are only hinted at or shown briefly.  The problem with the “happening” is that we learn too quickly what is going on.  Obviously journalists and government officials will be quick to place blame or find the responsible source; however, Shyamalan is too quick to settle on one explanation.  We learn from Elliot and an eccentric gardener that plants, trees, and grass can omit dangerous toxins and that they can communicate with one another.  Rather than teasing us along, Shyamalan sticks with this weak explanation and runs with it until the end, giving us none of his usual twists and turns, save for the fact that once the “happening” ends in New York City, it pops up again in Paris.

With so much discussion about environmental dangers, global warming, and climate change, Shyamalan’s film does the hot topic no favors.  In a way, rather than a terrifying, or at least creepy, experience, The Happening feels like more of a parody of global warming panic, something of an environmental version of a 1950s nuclear paranoia film.

The Happening (91 mins.) is rated R for violent and disturbing images and is available on DVD.