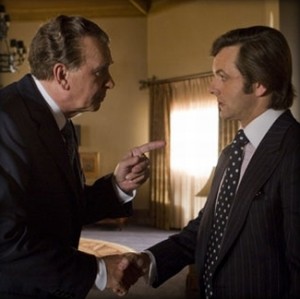 No, I’m not talking about the latest Pop Theology review between Richard Lindsay and myself.  I’m talking about Ron Howard’s latest film, Frost/Nixon.  But back to one of our Pop Theology dialogues:  we felt that one of the true highlights of Oliver Stone’s latest film, W., is his effort to humanize a controversial political figure with whom he no doubt vehemently disagrees.  One of my frustrations with that film was when Stone drifted into the war room and out of the living room of Bush’s life.  In a sense, I felt like I was watching two films, the personal and the political.  Stone, however, did have great success in blending the two in the scene where Bush confronted his minister about his decision to run for the presidency.  Another more recent biopic, MILK, was a better example of personal and the political intricacies as Harvey could not separate the two in his own time.  While Frost/Nixon is not a biopic per se, it certainly focuses on a pivotal moment in the lives of two men, one that highlighted the strengths and weaknesses of their larger-than-life personalities that embodied political and personal elements.

Frost/Nixon tells the story of the monumental 1977 interview between British television personality, David Frost (Michael Sheen) and former president Richard Nixon (Frank Langella).  Having resigned in the wake of Watergate and been pardoned by Gerald Ford, Frost still saw a story in Nixon.  With little apparent political conviction, at least compared to his colleagues, Frost saw great potential for television ratings that would return him to the heights of pop culture fame.  With no major network backing him, he set about piecing together the necessary funds to pay for the interview and its production.  Nixon also saw in the interview the potential to return to some sort of political power, especially at the expense of his lesser-known, foreign, and perhaps “weaker” opponent.  The film follows each camps’ preparation and participation in the interview.

Given that the interview already happened (it was just released on DVD all these thirty-odd years later for those of us who did not see it live) and that Frost cornered him into something of a “confession,” we could perhaps see Nixon as something of a fish in a barrel, ripe for the (re)killing.  To a great extent, director Ron Howard rightly criminalizes Nixon through documentary footage, the character of James Reston, Jr. (Sam Rockwell), and Nixon’s own final pseudo-admission of guilt or at least his confession of having been beaten by Frost in the interview.  Nixon never really confessed to breaking the law but did admit to grave mistakes that let down the American people. 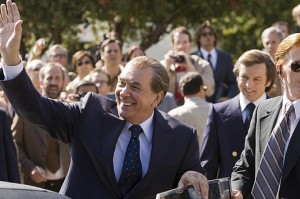 However, despite all this, Howard humanizes Nixon to a great degree.  Along with his corruption, we also see in Nixon a man of great intellect and an accomplished statesman.  In the film, Nixon confesses to greater comfort behind the scenes than in front of the camera.  His intelligence and political savvy shines in his debate with Frost, despite his reservations of being filmed.  Nixon, as smart as he was, must have realized that he made more than a mistake, even if he would not admit it before a camera.  His defense of presidential “invulnerability” is indefensible.  Throughout the course of the film, we not only see Nixon realize the chinks in his political armor, we feel his vulnerability with him as Frost turns up the pressure on his interview.  Langella’s performance makes incalculable contributions to the humanization of Nixon here and catapults him, along with Sean Penn, to the forefront of the Oscar race for best actor.  He portrays a president trying his best to both serve the country and cover his ass but realizing, live on tape, that his best was not nearly good enough.  With Langella, we see a house of cards literally collapsing right before our, and his, eyes.

In Frost/Nixon, writer Peter Morgan, who also wrote The Queen, gives us yet another script about a “traditional” leader who confronts a world getting out of (his) hands.  There is a similar overall rhythm between the two films, and both conclude with a final, brief encounter between the two adversaries that provides us with a wealth of insight into the characters and strengthens an already powerful film.  Another common link between the two:  Sheen as Frost (he was Prime Minister Tony Blair in The Queen) gives a spectacular performance as the jet-set television personality who held his own with Nixon and holds his own with Langella while conveying the simultaneous confidence and doubt in his abilities to pull off such an impossible task.

We will no doubt see more films about George W. Bush and his mistakes, and it is doubltess than many of his mirror Nixon’s.  Throughout the heated exchanges in Frost/Nixon,  we can detect a few of these similarities.  To his credit, Howard does not shy away from them, nor does he dwell on them.  Future filmmakers who choose to focus on our most recent and controversial president will do well to examine elements of W. and the entirety of Frost/Nixon to make the necessary complex film that all controversial political leaders require and deserve.

Frost/Nixon (122 mins.) is rated R for some language and is currently in theaters.