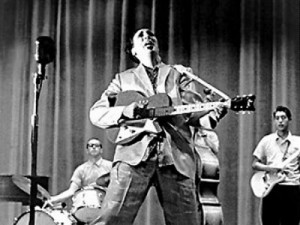 One of the great things about TCM is that they show the sublime and the absurd.  Most of the latter screens late on Friday and Saturday nights.  One of the films in its recurring Underground series that aired this spring was The World’s Greatest Sinner…a.k.a. “The World’s Worst Movie.”

It’ll take some effort to get past all the technical glitches that plague this production as mismatched editing, inconsistent sound, and poorly looped dialogue are rampant.  There are also some notable absences of shots in the racier “sex scenes.” In one encounter, the screen simply goes black for about five seconds or so. Unfortunately, the technical shortcomings are only half of the film’s problems.  The plot is the other.  The film tells the story of Clarence Hilliard (Timothy Carey), a life insurance salesman tired of his hum-drum daily routine who longs for something more out of life. In fact, Clarence wants to be God.  In order to attain divinity, he quits his job and develops a rock-and-roll religion of sorts that gathers a few followers. As his popularity grows, his new religion morphs into a political party, The Eternal Man Party.  His builds his religious and political ideas on a positive message of three principles, the super-humanness of all persons, the absence of death, and heaven on earth.

Clarence grows insanely drunk with power and adopts the name God and pursues presidential office. Along his campaign trail, he takes sexual advantage of teenage and elderly women, alienating his entire family in the process. When his family pleads with him to confess his sins, believe in Jesus, and return to church, he slaps his young daughter. This apparently throws him into both a sea of guilt and a crisis of faith in himself.  He questions (out of the blue) the existence of a higher being.  He steals away to the Catholic church and confiscates some communion wafers.  God makes a deal with God: if the wafer will bleed when he stabs it with a needle, he will renounce his power and return to church.  Of course it doesn’t, and he laughs hysterically; however, minutes later, he realizes that a trail of blood has followed him from his bedroom to his office. 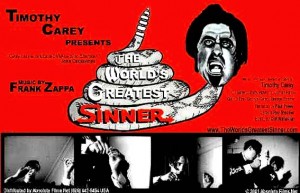 While the whole story is simply ridiculous, it does offer an insight into one aspect of religion, namely the ease with which people politicize their faith. In a matter of minutes in the film (days in the narrative), Clarence/God Hilliard’s new religion becomes a thriving political party which in turn makes this unqualified candidate a serious contender for the highest political office. The joy of The World’s Greatest Sinner lies in Carey’s shameless performance. His facial expressions defy explanation, shifting from lusty to drunken to insane in a matter of seconds for no apparent reason at all. Keep an eye out for any replays of this gem on TCM or bid for it on E-bay.

Here’s a clip of a scene in which Clarence/God “preaches” to his followers: