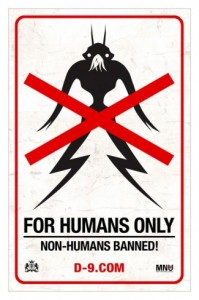 Pop Theology contributor Richard Lindsay and I discuss one of the year’s best movies after the jump. 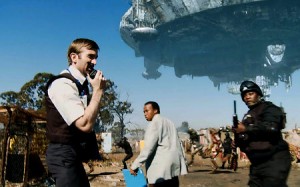 District 9 takes place in Johannesburg, South Africa, where 20 years ago an alien space ship arrived and hovered over the city.  It did nothing…just floated there.  Finally, a team of soldiers infiltrated the spaceship to find hordes of malnourished aliens.  In order to “help” them, they moved them to a shanty-town area of the city named  District 9.  There, the aliens reproduced but lived in ever-devolving situations scrounging for food in the trash, trading their weapons to Nigerian gangs for cat food, and even engaging in creature-to-creature prostitution.  Fed up with the horrific conditions and situation, the people of Johannesburg demand that the aliens be moved further away from the city.  Officials set up a refugee camp 200 km away and begin the process of forced evacuation/eviction.  In this process, the director of the program Wikus Van De Merwe (first-time actor Sharlto Copley) is poisoned by an alien fluid which, putting it lightly, screws up the entire process and his life.

Ryan: Richard, I just want to say a couple of things about the filmmaking here.  Had I not known before going to the film that it only cost $30 million, I would have easily assumed that it could have cost ten times that amount.  This is an example of economic filmmaking the likes of which we haven’t seen since the Kendrick brothers and Sherwood Pictures in Albany, GA (I kid…kind of).  But not only is it economic filmmaking, it’s just damn brilliant too…a mix of documentary, surveillance, and hand-held footage that Neill Blomkamp (in his first feature film) combines in seamless fashion.  And the special effects…don’t even get me started.  As one critic mentioned, the special effects here actually augment, not distract from, the story (bad special effects, what should have been the key ingredient, in a film like Transformers 2, actually ruined it for me).  The way in which the alien weaponry dispenses with people never really gets old.

I also would have never guessed that Sharlto Copley was a first time actor.  Rarely, if ever, do Oscar nominations go to stars of sci-fi films, but here is a case in which it is certainly deserved.  He plays this blundering office rat who only gets promoted because he is married to his boss’ daughter.  As he moves through District 9 serving up eviction notices, neither the aliens, nor his fellow officers really take him seriously.  However, he is so deeply human and accessible throughout the entire film, which is no small feat for a first timer in a film like this.

Richard: I agree with your assessments of Blomkamp and Sharpley. What they’ve given us here is something entirely new. I remember in the late nineties when digital moviemaking started to proliferate and the hope was this would add a whole new layer of Verite to filmmaking. I think we’re seeing that potential bloom with films like this, where the digital medium adds to the believability of the story, and the line between fantasy and reality becomes blurred.

Ryan: There’s been much talk, too, about this being a statement film about apartheid in South Africa.  It is that, but not over-handedly so.  I think this is a place where the sci-fi action might distract from that story or keep it from being too earnest.  We are still left with the “message” or “messages,” which do abound, and I’m sure you’ll discuss them.  One of the things that I found both frustrating and interesting is how the government and the Nigerian gangs were only interested in the aliens for their weaponry and technology.  In a sense, they were military p(r)awns (forgive me).  I believe this, along with the notion that the creatures were in a sense “people” too and should have been treated as such, mirrors the real world scenarios in which powerful countries exploit immigrants and “third-world” populations for a host of reasons yet deny them basic human rights or services.

Richard: As usual, science fiction proves to be the most theological of genres. All sci-fi deals with eschatology — the future and perhaps end of the spiritual or historical arc of humanity as we know it. Much of it also has the quality of apocalypse, or revelation of cosmic events having to do with that end. Where fundamentalists have taken over the cultural dialogue about apocalypse is in their morbid fascination with an angry God destroying the world and wreaking everlasting punishment. This is a narrow view of the potential of eschatology and apocalypse. If aliens landed on our planet tomorrow, it might not be the Judgment Day, but it would be the end of the world as we know it. 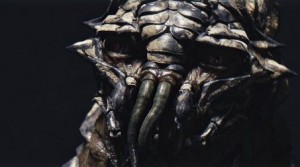 Two theological approaches that occurred to me as I watched this film. The first included David Chidester‘s definition of religion:  “Discourses and practices that negotiate what it is to be a human person both in relation to the superhuman and in relation to whatever might be treated as subhuman.”  (Chidester, interestingly enough, is a professor of religion at the University of Cape Town.)  Could there be a better description of the religious nature of this film? The aliens are both superhuman and subhuman. They possess superior technology but as their leaders have died and only the worker drones survive, they trade their ray guns for cat food. They are sentient and are capable of speech, but mostly exist on a lower level of intelligence than humans. Their bodies are just as vulnerable to bullets and beatings as ours, but they can rip a human limb from limb if provoked. I agree with your assessment of the dehumanization caused by the military-industrial complex and immigration policy. But I also think the film offers the challenge of relating a “human rights” framework to beings that are sentient but slightly less than human on a biological level. (The exception of course being the brilliant alien Christopher Johnson and his son.)

The second theological approach is that of liberation theology, which recognizes that the privileged cannot ultimately understand what it means to be oppressed, because they can always choose to leave the situation of oppression. I could live on the streets and experience life as a homeless person, but it wouldn’t be the same as a real homeless person, because my level of education and family support would give me the option of leaving and returning to my middle-class life. The most I can do is be in solidarity with the oppressed. This film messes with that whole assumption as Wikus Van De Merwe finds himself having to identify ever more closely with the aliens. But the point remains that for Wikus, as for anyone who wishes to be transformed into a more compassionate being, losing our assumption of privilege is a slow and painful process, almost like a metamorphosis.

Ryan: Thanks for those points Richard.  The liberation theology reading didn’t immediately occur to me but it makes perfect sense.  And I want to reiterate your idea of a slow and painful process, especially in a world where everything moves so quickly or is expected to.  There’s a certain genuineness in Wikus’ transformation because it doesn’t take place overnight.  There are so many parallels that we could draw with our own lives and actions that need change which cannot happen instantaneously.  Yet hopefully we live our lives on a path towards that goal of being transformed and transforming.

District 9 (112 mins.) is rated R for bloody violence and pervasive language and is in theaters everywhere.

You can see a video of Neill Blomkamp’s short film, Alive in Joburg, on which District 9 is based, on the Pop Theology home page.

August 18, 2009
Michael Vick: On Judgement and Participation
Next Post