A Fate Worse Than Death? 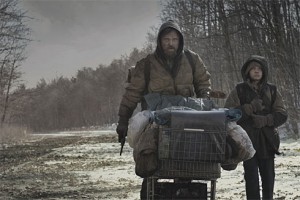 Roland Emmerich’s disaster films are escapist fantasies that imagine how we humans will respond in the face of certain (almost) global destruction.  As I mentioned in a review of 2012 yesterday, they often present an emotional utopia of family togetherness against this dystopic background.  Another recent film, the post-apocalyptic story, The Road, unfortunately presents a perhaps more realistic portrayal of the human response to global destruction and survival of said catastrophe.

John HIllcoat‘s film is based on Cormac McCarthy’s poetic novel about a father (Viggo Mortensen) and son (Kodi Smit-McPhee) who wander a post-apocalyptic United States, somewhere along the east coast it seems.  Neither the book nor the film inform us of what caused the destruction or if indeed it truly is global.  We suspect either natural or nuclear disaster.  The scenery appears to be covered in nuclear fallout…but not everywhere.  On top of that, earthquakes take place in areas that don’t seem to be earthquake prone.  The father and son have been journeying to the coast for years, living on whatever scraps of food they can find, but adamantly refusing to resort to cannibalism as so many other survivors have done.  The most tense moments in both the book and the film involve their near misses with these roving or settled gangs of cannibals. 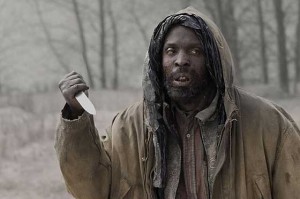 Along the way, the father and son also encounter less threatening individuals which help reveal the complexity of the good guys vs. bad guys dichotomy that the father establishes for his son.  Robert Duvall plays an elderly wanderer who cannot speak about the death of his son while Michael K. Williams (The Wire‘s Omar) plays a loner who stole the father and son’s possessions and is forced to return them at great cost to both his and the father’s dignity.  At the end of their journey they also encounter a husband and wife with two children and a dog who have been following them on their journey.  This union signals a glimmer of hope that hopefully the cannibals will not devour, but we are left with no assurances.

There is much to dissect here, even if the characters do not make frequent theological claims.  At one point, while reflecting on the state of things, the father says that if he was God, he would have made the world just so, a faithful assertion given the condition he and it is in.  Throughout their journey, the father assures his son that they are the good guys because he (the son) is carrying the fire/light.  We are to take this, I believe, as the light of God, and, in some interviews, McCarthy is comfortable with that reading and even claimed, upon an early screening, that the film could have used more references to God.  The film has much to say about the values of community in times of trial, even if they are through the negative portrayals of those communities.

Visually, the film is stunning, capturing in a very believable way what a post-apocalyptic world might look like, and adding to the haunting presence of the cannibals and vagabonds.  Yet capturing the emotion and beauty of McCarthy’s novel is something that will always elude any filmmaker.  Thus, The Road fails to establish that emotional connection between the audience and the two lead characters.  The scenes in the novel that provide the most emotional payoff could have been restructured or delayed in the film for greater effect.  Nevertheless, The Road still remains a compelling film that is an interesting foil to the over-the-top destruction of Emmerich’s 2012, proving that there are indeed fates worse than death.

December 2, 2009
The World's Dead, But At Least the Family Survived
Next Post