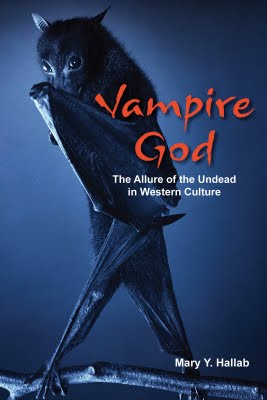 In preparation for an upcoming conference on vampires and the undead in popular culture, I’ve been catching up on vampire literature.  Via Theofantastique, I came across a new book, Vampire God:  The Allure of the Undead in Western Culture, by Mary Y. Hallab.  In only 136 pages, Hallab takes readers from vampire folklore up to the Twilight series, unpacking the needs, desire, and fears that vampire literature (folktales, novels, and movies) embodies.After her introduction, Hallab explores the scientific, social, psychological, religious, and theological implications of vampires.  In doing so, she reveals that little has changed between our obsession with vampires and the obsessions of our human predecessors centuries ago.  Thus, the highlight of Hallab’s text is her ability to hold those “ancient” texts/tales/needs and uses of them in continual tension with ours.  The major thesis of Hallab’s (as well as many other scholars’) study of vampires is that they have the ability to morph into whatever society both shuns and demands.  As a result, Hallab asks what “hidden void” contemporary vampires seek to fill today.  Hallab argues throughout her text that the “fascination of the vampire lies in his being both human and supernatural” (4).  Furthermore, the vampire “provides a fictitious and mythical focus for universal concerns about death and its reasons,” a “symbolic and metaphorical means to apprehend, contemplate, and deal with death within the larger context of life” (6, 7).  Death, as we are well aware, has scientific, social, psychological, and religious/theological implications.  Vampire literature speaks to all of these.

In terms of the scientific, Hallab is concerned with how vampire literature provides “practical understanding of aspects of life that simply do not seem to have any reasonable explanations,” both for us and our less scientifically minded predecessors (13).  The evolving scientific explanations throughout vampire literature that attempt to apprehend the existence of vampires are both entertaining and enlightening, as are the scientific means by which vampire hunters attempt to dispatch these pollutants, diseases, and embodiments of death.

Regarding vampires literature’s social implications, Hallab shows that it reinforces notions of community and how accompanying social mores dictate insiders and outsiders.  As Tony Campolo says, a movement can survive without a God, but it cannot survive without a devil.  Throughout history, vampires (both those in literature and metaphorical ones in the real world) have often helped solidify a group as it provides an evil against which to fight.  Hallab writes, “In some cases becoming a vampire is a punishment for wrongdoing” (36).  In other cases, folk might have performed burial rites incorrectly which could lead to the emergence of vampires.  An important aspect to social life is our relationship with the past, and Hallab reveals how vampire literature embodies ways in which we learn from, fear, love, and romanticize our pasts.

Psychologically, vampires provide a means of “exploring and possibly dealing with personal loss and acceptance of death,” Hallab argues (14).  In this chapter, she explores, among other things, the relationship between the soul and body and sexuality.  She notes the dominance of sexual interpretations of the vampire genre and unpacks their implications.

For Hallab, and myself, the religious/theological implications of vampires are most interesting, and she devotes the most significant portion of her text to this discussion.  First, they raise questions about the meaning of the soul, life, and the afterlife and the existence, nature, and role of God in these worlds.  Furthermore, she draws parallels between Christians’ devotion to Jesus and our fascination with vampires:  both of whom promise immortality and the consumption of whose blood is a significant ritual in the attainment of that immortality.  She writes, “The vampire, as a kind of evil Christ–that is, both human and supernatural, both dead and yet alive, both offering a kind of redemption of humankind into another life–is a popular representative of the Dark Side in the endless cosmic struggle” (73).

Hallab’s book is a fascinating read that is expansive and informative without ever being boring.  On top of that, she has a great sense of humor (especially when it comes to religion) that is a welcome ingredient to such an  academically engaged text.  Fans of the horror genre in general or vampires in particularly would do well to pick this one up.