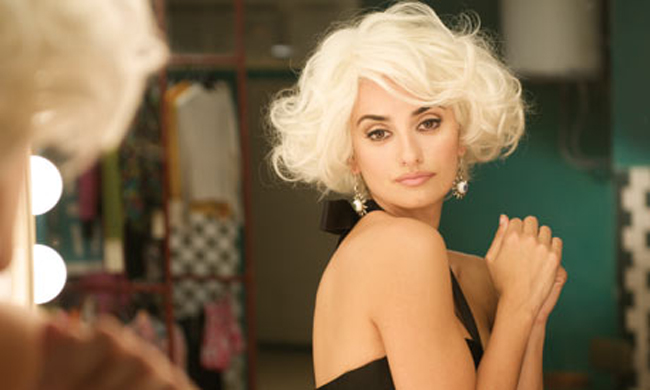 As would be expected, Pedro Almodovar‘s latest film, Broken Embraces, is an alluring mix of beautiful filmmaking and captivating storytelling.  The ways in which this film comment on filmmaking itself and themes of family, love, obsession, and secrecy demand repeated viewings.

Broken Embraces tells the somewhat complicated story of Mateo Blanco (Lluis Homar), a Spanish filmmaker who becomes Harry Caine, a blind writer.  One day, a mysterious stranger, Ray X (Ruben Ochandiano) arrives at Harry’s door hoping to work with him on a future film project.  This stranger deeply unnerves  Harry’s agent, Judit (Blanca Portillo), and her son Diego (Tamar Novas) becomes suspicious as a result.  Almodovar moves back and forth between the present and the past, a separation of about a decade or so, to uncover both the identity of the stranger and how Mateo became the blind Harry.

As in Volver, Broken Embraces benefits from the presence of Penelope Cruz as Lena, an aspiring actress, and although she has a significantly smaller amount of screen time, she is the major catalyst in the progression of the narrative.  She becomes trapped in a relationship with a wealthy, older businessman who produces Mateo’s film in which she stars.  Mateo and Lena fall in love and run away together.  Through his memories of this affair and recounting it to Diego, Harry uncovers the secrets of his life and learns new ones in the process.

Again, the cinematography is absolutely stunning, particularly Almodovar’s preference for bright, luscious colors that enhance the beauty of the actors while simply washing over his viewers.  Roger Ebert wrote, “As it ravished me, I longed for a freeze frame to allow me to savor a shot.”  As usual, Cruz gives a superb performance, and the scene in which she tries on a variety of wigs for Mateo in a photo shoot demands to be played on repeat.  Yet she is matched in her performance by the rest of the cast, particularly Blanca Portillo as Judit, the agent who harbors not only her own secrets but an abiding love for her client.

It seems to me that few, if any, filmmakers can make such grand narratives seem believable like Almodovar.  His success in this, I believe, lies in his ability to never lose sight of the humanity of his characters and his desire to mine the complexities of the human condition.  While I’m still thinking about this, it seems like his narratives are always at the service of his characters, providing us with some of the richest in contemporary cinema.  Here, Almodovar takes dark themes of obsession, greed, jealousy, and loss and weaves them into a loving conclusion full of reconciliation, forgiveness, and hope.  The embraces may be broken, but there’s healing to be had.

Broken Embraces (127 mins) is rated R for language, sexual content, and drug use and is available on DVD.