“God must get awfully tired of hearing the same thing over and over again, and in His all-embracing wisdom could certainly embrace a dissonance—might even enjoy one now and again.” – Charles Ives

“Stop being such a God-damned sissy! Why can’t you stand up before fine strong music like this and use your ears like a man!” – Also Charles Ives (presumably in a fouler mood).

At my undergraduate music school in the early nineties, we spent a significant portion of our theory and history classes wrapping our heads around the avant-garde sounds of the Twentieth Century. These were the composers our instructors told us were now “important,” as opposed to the classical Beethoven and Bach, pop-classic John Williams and John Rutter, and concert bandmasters like Alfred Reed that had motivated us to go into music in the first place. We feigned a knowing appreciation of Charles Ives’ dissonant polytonality, John Cage’s chance music (one piece involved people walking around tuning radios to different stations) and the tape loops of Steve Reich and Karlheinz Stockhausen. Our professors self-assuredly told us this was the “classical” music of the future.

What I think they imagined is that one day we would go to concert halls and listen to abstract acoustic and electronic soundscapes that would challenge our notions of musical theory and form. What they, and we, didn’t realize was the “music of the future” would happen according to its own anarchic patterns. As electronic mixing technology spread, innovative musicians like Aphex Twin, Nullsleep, Deadmau5, Daft Punk, Moby, and Bjork, would not wait for the stuffy approval of the “formal” music world. The “serious” composers we studied in music school, when drained through pop music’s democratizing sieve, would become what we now know as electronica. 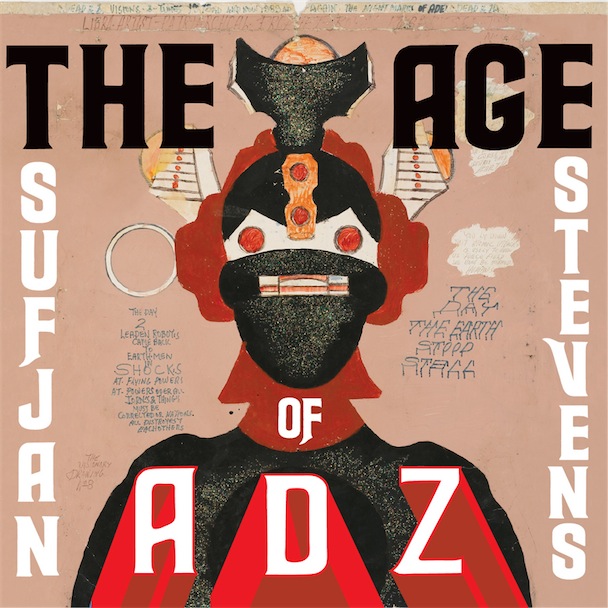 In The Age of Adz (pronounced “odds”) Sufjan Stevens (pronounced SOOF-yan STEEV…you get the idea) has produced a remarkable album of acoustic and electronic soundscapes that represent a clear break from his previous work. Already the songwriter/performer of what may be the best indie album of the last ten years (Illinois, 2005) Stevens put his growing audience on the line to produce a wild song cycle of clashing beats and electro-noise. The response from the fans that know him as the aching, banjo-playing, latter-day Elliott Smith who wrote such exquisitely produced chamber pop as “Come on! Feel the Illinoise!,” “John Wayne Gacy, Jr.” and “The Predatory Wasp of the Palisades is Out to Get Us!” has been nothing short of consternation.

To understand this reaction, you have to know who Stevens’ audience is (or used to be). An alumnus of both an evangelical Christian high school and college, Stevens has been an Emerging-church poster boy. His previous albums have included spiritual music that has caught on with both the secular indie scene and the post-Christian-pop crowd. For evangelicals of a certain hipness who were tired of defending the artistic merit of (or lack thereof) of CCM, Stevens was proof that “Christian” music could produce a real innovator. The fact that several of his songs have homoerotic undertones that would have sent their culture-warrior parents into fits of banshee-like rage only added to Stevens’ appeal for evangelical X-ers and Millennials. But after waiting for five years for his post-Illinois LP, only to be confronted by the experimental musique concrete of The Age of Adz, it is his young Christian fans who have been thrown into a rage, and a palpable sense of betrayal.

The opening song on Adz, “Futile Devices,” lulls the listener with a more typical Stevens sound: acoustic guitar and piano, and vaguely homoerotic lyrics. “You are the life I needed all along/ I think of you as my brother although that sounds dumb/ and words are futile devices.” Is this written to a friend? A lover? Jesus? Who knows?

“Get Real Get Right” is pretty inoffensive as well, dedicated to the album’s muse, African-American outsider artist Royal Robertson, whose work adorns the album cover and booklet. The song is a funky groove with drum machines, willowy woodwinds and a horn line. It refers to Robertson’s apocalyptic obsessions: “Prophet, brother, priest and king/ Snake-skinned master at your feet/Barricade the bathroom doors/ Find some things you can’t ignore.” But the chorus is a classic gospel music message, “Get real, get right with the Lord.”

“Too Much,” when not overwhelmed by scratchy white noise, seemed to be channeling Stevens’ inner Devo, at least when I saw the clip of him on Jimmy Fallon. “Vesuvius” is a repeated chant that builds in intensity like a lava flow, slowly erupting with strange, bubbling electronic sounds popping around the vocal line, culminating in a descant of elementary-school plastic recorders. Just as the chaos is about to explode, an anti-climax of chopped-up vocal and electronic shards brings us down the other side of the mountain.

Stevens has said in interviews that Adz reflects an evolving interest away from long-form narrative songwriting towards the musical gesture. There are plenty of musical gestures—repeated vocal lines, riffs, and patterns—on this album. This is not entirely a departure, as Stevens’ previous album, while sounding much more conventional, also showed a tendency toward the kind of looping American minimalism of composers like Steve Reich and Terry Reilly.

“I Walked” demonstrates Stevens has not lost his narrative skill in the midst of the new electronic tone-world he is creating. Addressed again to a nebulous “lover,” the song has remarkable lines like “For when you went away I went crazy/I was wild with the breast of a dog/I ran through the night/With the knife in my chest/With the lust of your loveless life.” If that’s musical gesture over narrative, I’ll take it.

“Now That I’m Older” starts with a remarkable wordless arrangement for voices that has the doleful, bluesy sound of a field chant or spiritual. (Perhaps a musical theater version of a field chant or spiritual). Either way, it’s haunting. If a middle-class guy from the Michigan suburbs can sing the blues, this is it. “All for Myself” benefits from a similar repeated scratched-record blues riff.

This Sufjan-in-a-blue-funk vocal style is used to less positive effect in “Bad Communication,” which plods like a funeral march being led by a Casio keyboard. Other songs that don’t “communicate” so well are “The Age of Adz,” which starts with a grinding robotic apocalypse and morphs into several other overwrought innovations during its seemingly interminable eight minutes. It’s a bad sign when you’re checking your iPod for the number of minutes left in a song because you can’t believe the thing is still going.

A song that definitely challenges a pop-music listener’s sense of time, but is more likely to reward patience, is the 25-minute epic, “Impossible Soul,” that rounds out the album. This is the kind of musical adventure that would have covered the B-side of an album back in the days of vinyl. (Look it up on Wikipedia, kids.) The song seems to be about woes in a relationship using some nebulous, possibly closeted gender-switching language. (The song is addressed to someone Stevens calls “Woman,” but is spoken like a man who has never addressed a lover as “Woman.”) The song might just be Stevens’ version of Bob Dylan plugging in at Monterey (look it up on Wikipedia, kids) with the folk singer shredding a spiky, screechy electric guitar solo, and even using (gasp) auto-tune. Even more remarkable, it sort of works. I doubt we’ve heard anyone with Stevens’ musical skill and vocal sensitivity use auto-tune before; it’s usually a tool of rappers and tonally-challenged soul divas.

There are times when Stevens’ range-straining Bobby-Brady-hits-puberty vocal stylings are too weak for the sheer muscle of the horns, beats, and bleats he has amassed. It would take a considerably more powerful singer—perhaps Tom Jones—to out-sing some of this cacophony. Stevens the producer and arranger also continues the penchant for his clatch of “just the girls” backup singers (one imagines three white Brooklyn women-hipsters with requisite nose piercings and tattoos) with perfect diction but no sass or jazz in their voices. Their bland vocalizing eventually grates when used in nearly every song, both on Adz, and on the more listenable Illinoise.

“Listenable” is less the description of Adz than “challenging.” But opening your ears to an artist stretching his talent can be an enlightening experience. Stevens’ next album, however and whenever that comes about, will hopefully combine the best of this new sound and some of the old sound that his fans love (unless he’s really a sucker for art at the expense of financial success). The noise of The Age of Adz may very come from the construction of something quite exciting and new.

One more word about the gendered address of Stevens’ songs. An indie folk singer was never hurt by a little sexual ambiguity. Presumably, at the age of 35, Stevens knows which way his sexuality trends—and it doesn’t appear to be exclusively heterosexual. This would be nobody’s business but his own, except folk singers tend to sing about relationships a lot, leading to natural curiosity. And LGBT people are not yet free. There are queer evangelical kids marooned at Christian academies and colleges who could use a role model. Some of them would rather kill themselves than face their families, churches, and friends with the truth of their sexuality. If they could see a man with immense God-given talent, who tours around the world performing creative and sensitive music, and who just happens to be queer, it would them a lot of good. The Age of Adz represents a bold new beginning, what may be seen as the first of the mature work of an important musician. It will be interesting to see if Stevens matches this adult album with an adult admission of who he is.