Somebody's Got To Review Prometheus!

Ryan and Amy are finishing up a week in a Southeast Asian paradise with little or no contact with the outside world. This past week, I made the decision to leave Berkeley and join Fred in Southern Louisiana. Apparently, after 6 years in the middle of things in the Bay Area, Ryan and I are fleeing the centers of pop culture civilization. This does not bode well for the project of PopTheology.

Witness our inability to get up a review for Ridley Scott’s Alien prequel Prometheus, despite simultaneous worldwide distribution. I know for a fact Ryan saw this film in Malaysia as soon as it came out, but then he disappeared where apparently the Internet has yet to be discovered. I have been dealing with details of an impending move and didn’t have time to get to a theater until late last Thursday night.

But, in the spirit of John Hurt, who somehow managed to keep his British dignity even with an alien hatchling bursting out of his chest, I shall Keep Calm and Carry On with some thoughts on Prometheus.

1.)   Visuals: spectacular: I saw the film in IMAX 3D, and wow, what a treat for the senses. The film starts with spectacular zooming footage over Scotland, where two archaeologists (Noomi Rapace, Logan Marshall-Green: remember when actors had easily-recalled screen names?) have found cave paintings that point them to possible alien life forms light years from Earth. Their search for the life forms quickly takes us into outer space, aboard the Prometheus, an expeditionary ship funded by the Weyland Corporation. Once on ship, we are introduced to David (Michael Fassbender), an android who has been whiling away the two-year journey (the humans are in cryo-hibernation) by learning languages and watching Lawrence of Arabia. In fact, he has styled himself after both the look and the detached mannerisms of Peter O’Toole. Watching David crisply go about his business onboard, by himself, with Chopin’s “Raindrop” Prelude playing in the background, one is brought back to the brilliance of bringing together classical music and science fiction.

In fact, the whole film—from the moon surface scenes with a giant ringed planet filling the sky, to the natural forces of mountains and water and the suggestion of human life being created from the DNA of massive, marble-white aliens; even the old-school bubble-headed space suits—brings us back to the mind-expanding science fiction of 2001: A Space Odyssey. The key is in having characters we can imagine knowing (Scott retains his talent for bringing along scruffy working-class characters to interact with the obsessed scientists and corporate tools), doing things we can imagine ourselves doing (e.g. visiting another planet that looks like a real planet rather than an acid trip with blue aliens).

Scenes like David’s discovery of the “Engineers’” holographic star charts are about as spectacular as anything I have experienced at the movies. At various points during the film, I actually found myself staring with mouth agape at what was unfolding. When used thoughtfully and used well, 3D, particularly in the IMAX format, is introducing a new element to storytelling in film.

That being said, it’s amazing how little has changed since the last flourishing of 3D in the early 1950’s. Comparing some of the classic 3D films of that era and Prometheus, one could easily come to the conclusion that 3D was created to show four things: spacemen and spaceships, creatures, and boobs.

I illustrate here (all of these films were released in 3D):

Company founder Peter Weyland has sent the crew to find out if these aliens are indeed our forebears. (The audience knows they are from the opening scene.) Weyland is Guy Pearce in some really bad aging makeup. Seriously, even after he first appeared, I was still asking myself, “Wasn’t Guy Pearce supposed to be in this film?” (I always note the appearance of an alumnus of The Adventures of Priscilla: Queen of the Desert.) Weyland talks a lot about finding out the answers to life’s “deepest questions,” from the Engineers. But it mainly comes down to a rich man’s search for the Fountain of Youth.

In the process, we begin to figure out that the nasty xenomorph alien that we know and love from the previous films is a kind of biological weapon, created by these god-like Engineers, gone horribly wrong.

The philosophical/theological question at the heart of Prometheus is, What would happen to faith if intelligent life were discovered on other planets? A few years ago, Pacific Lutheran Theological Seminary professor Ted Peters proposed this question in a blog post. I jokingly suggested to a class that, knowing Ted Peters, he would say the aliens were ‘justified by grace through faith,’ the Lutheran formula for salvation. According to an article in Wired magazine, I wasn’t far off.

“Just as Jesus is human like you and I, you would find an alien-specific Jesus,” Peters said. Unless, of course, the aliens weren’t “fallen” like humanity.

Prometheus actually suggests, through a visual image, the possibility of a cosmic Christ, and the notion that something killed off a bunch of the Engineers 2,000 years ago. Hmm, what could that have been? There’s a strong suggestion, and this has come from Ridley Scott himself, that Jesus Christ was in fact an emissary from the Engineers, and humanity’s rejection of him caused a rift in the Engineers’ perception of us that led to the unleashing of the destructive xenomorph alien on humankind. Prometheus leaves us with a sequel setup, in which the surviving archaeologist, who insists on wearing a cross as a sign of faith, is intent on finding out why our creator race turned on us.

I actually like this revisionist theology. With all due respect to the gleeful hubris of Peters’ Cosmic Lutheranism, I think we might be in for a bit more of a theological challenge if other intelligences are discovered—alien or artificial. Like the revolutions of Copernicus and Darwin, discovery of non-human intelligences would be a game-changer, and Christian theology as we know it would have to adapt.

But wouldn’t such a discovery just end Christian theology, might you say? (If you’ve been reading Christopher Hitchens, God rest his soul, or Richard Dawkins.) I suggest that it would not, and here’s why: the seemingly innate human need for grand narrative.

Another critic that I highly respect, British-American expat David Thomson (in leaving Berkeley, I am leaving behind rubbing elbows with Thomson at Pacific Film Archives presentations…the things we do for love) was one of several notable film reviewers who disliked Prometheus. He denounces its “Inane pomposity…and its attempt to kid itself, as well as us, that we care a hoot about the obscure origin of our ‘stuff.’”

Thomson may be complaining specifically about how the claustrophobic horror of the first Alien has been blown up, and possibly overblown, into a broad universe of science fiction fantasy. But in terms of the larger suggestion that movie viewers don’t care about the “obscure origin of our ‘stuff,’” Thomson is demonstrably wrong.

In all likelihood, we will see a prequel-sequel of Prometheus as long as the 74 year-old Ridley Scott has life in his body–and it may be the last contribution to his illustrious film career. Later this summer, we will see the third installment in the origin story of Batman, and yet another origin story for Spider-Man. After seven books and eight movies, fans could barely wait for J.K. Rowling to publish further origin stories from the Harry Potter universe on the Pottermore Web site. We, in fact, seem to be obsessed with the “obscure origin of our stuff.”

What this points to for me is a seeming obsession with the grand narrative that was supposed to have died off in the latter part of the 20th century. The way it’s supposed to have gone was that in the West, we used to have A Story, which was Christianity. This was replaced by The Stories of modernism: mainly Darwinism, Marxism, and Freudianism, but also some Carl Jung/ Joseph Campbell meta-narratives. But then, even those narratives began to break down in the storms of history, which is how we ended up with Post-everything: Post-modernism, Post-feminism, Post-colonialism, Post-Marxism, Post-Freudianism, Post-gay, Post-whatever-you’re-into-it’s-over.

But just when the tenured English professors were supposed to have killed all this off, these grand narratives keep popping up with even more frequency in popular fantasy. Look at the massive success of Comi-Con, which might as well be called Grand Narrative Con. Even atheist storytellers like Joss Whedon create grand and detailed supernatural universes of fantasy. Why is this?

I’d like to propose that the desire for grand narrative is not that different from the desire for God. If we truly do believe there is no moral center to the Universe, then the rational response is a rejection of grand narratives. We do ourselves no favors by fantasizing about the origins of Batman, Alien, Spider-Man, or Harry Potter, when the universe is simply not structured that way. If, however, grand narratives, in some way, “exist,” to the extent that we can’t let go of them, then we must acknowledge that there is something in our hardwiring that is geared toward structure and belief.

One of the ideas introduced in Prometheus is the “choice” to believe. This smacks a bit of New-Agey “systematic Oprahlogy”—“Your truth may not be my truth, and what you choose to believe may not be what I choose to believe.” But I do think there is always an element of choice in belief. When I hear people say, “I lost my faith,” or “I found Jesus,” it sounds entirely too objective, as if we are merely being operated on by forces outside our control. To some extent, belief is a choice; to some extent, the grand narrative we follow is a choice.

I choose to believe in a grand narrative that is both of God, and intimately tied to the history – evolutionary and cultural—of the human species. To some extent, as in Prometheus, the grand narrative can be played with and rearranged with different scientific and cultural assumptions. This is one of the great joys of being made in God’s image, and being co-creators with God of our planet’s narrative. Perhaps that’s why I took such joy in watching this film, even with its moments of horror. We need films like this to jar us out of our solipsistic postmodern naval-gazing and help us to imagine the wild and fascinating possibilities for the human species—both the origins and the outcomes of “our stuff.” 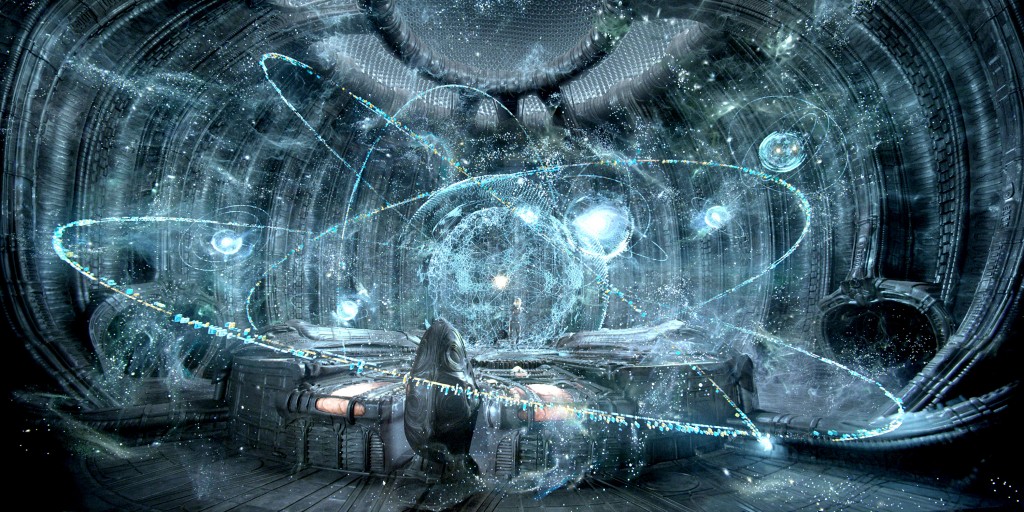