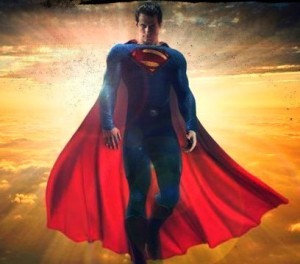 The moment word broke of the new Superman film, Man of Steel, directed by Zack Snyder, the comparisons between Superman and Jesus were bound to happen.

Snyder himself has mentioned it: “I think the relationship between Jesus and Superman is not a thing we invented in this film, it is a thing that has been talked about since the creation of Superman. And in a weird way, probably was talked about more when Superman was created than it is now. It’s one of those things mythologically you take for granted, a little bit.”

Australian scholar Anton Karl Kozlovic has made an academic cottage industry out of naming Jesus figures in movies. One of his classics is “Superman as Christ-Figure: The American Pop Culture Movie Messiah,” published in the Journal of Religion and Film in 2002. His evidence for Superman being a Christ figure in the 1978 and 1980 Christopher Reeves films (for some reason he ignores Superman III (1983) and Superman IV (1987)) range from the reasonable (Superman begins his career at the age of 30) to the ridiculous (when Superman does some feat of daring, someone exclaims “Holy Mackerel!” clearly revealing his divine status).

I’m all for a good Christ figure in the movies. If you want to find some more challenging Christ figures than the typical superhero stuff, try Jackie Earl Haley’s character in Little Children or John Hurt playing Quentin Crisp in The Naked Civil Servant.

But Superman is not a Christ figure. And here are five reasons why.

1.)   When speaking of the Superman-Christ relationship, commentators inevitably bring up two elements from Superman’s origin story: his Kryptonian name Kal-El, which, roughly translated into Hebrew means “Voice of God,” and his being sent in a capsule by an interplanetary “father” to Earth to save humanity.

Superman was created by two Jewish teenagers living in Cleveland, Joe Shuster and Jerry Siegel. His adventures were first published by Action Comics in 1938, but he was developed as a character several years earlier. It seems unlikely that two Jewish boys in the early 20th Century, Bar Mitzvahs still fresh in their minds, would have created a superhuman Christ figure.

The closer parallel is to Moses, who was sent down the Nile in a basket and adopted by people not his own, and who for a time took on the identity of a Gentile. This also suggests Jewish immigrant experiences (Shuster and Siegel were both children of immigrants) in which some Jews adopted Anglicized names to blend in with American society. In fact, Siegel and Shuster sometimes submitted their comic book ideas under the name Bernard J. Kenton.

I don’t think we have any idea today just how segregated Jewish people were from “mainstream” American society in the early 20th century, and how virulently anti-Semitic gentile Americans were in the years leading up to World War II. Rabbi Simcha Weinstein, who has studied the Jewish origins of many comic book superheroes, writes,

“The 1930s were also, arguably, the most anti-Semitic period in American history. Nazi sympathizer Fritz Kuhn of the German-American Bund led legions of rabid followers on marches through many cities, including Siegel and Shuster’s hometown. Radio superstar Father Charles E. Coughlin of the pro-fascist Christian Front was one of the nation’s most powerful men. And Ivy League colleges kept the number of Jewish students to a minimum, while country clubs and even entire neighborhoods barred Jews altogether.”

It seems more likely that Superman reflects the yearning of two kids from immigrant families to find their identities in a hostile American culture. In some ways, Superman is an attempt at assimilation, the desire to be more American than the Americans—all that stuff about “Truth, Justice, and the American Way.” In other ways, Superman takes being alien and turns it into a strength—the very sun of this strange planet, this foreign culture, gives him super powers. This is a pretty neat fantasy for any powerless-feeling kid, and a lasting part of Superman’s appeal.

2.)   Lex Luthor is not Satan. The resonance between the names “Luthor” and “Lucifer” has been brought up among the Super-Jesus set. Again, this is the wrong mythology for Superman’s Jewish origin. Siegel and Shuster may not have even been aware of the Christian mythology of Lucifer as a fallen angel who became Satan. (And I mean mythology — this story has more to do with Milton than Revelation.) If we’re just going on names alone, “Luthor” could just as easily be Martin Luther, who was an anti-Semite, and who’s teaching on the subject influenced both the German nation and German-Americans in their anti-Semitism.

3.)   Superman, despite his claim to do justice, is not the Prince of Peace. Saving someone from an oncoming train is not the same as giving them salvation. And more often than not, Superman’s means of achieving his goal is violence.

“A community in a harmonious paradise is threatened by evil; normal institutions fail to contend with this threat; a selfless superhero emerges to renounce temptations and carry out the redemptive task; aided by fate, his decisive victory restores the community to its paradisiacal condition; the superhero then recedes into obscurity” (6).

The American Monomyth teaches Americans that the structures of democracy are too slow to be trusted, and that we should hold out hope for a vigilante to come along and save us from our own ineptitude and indecision. It affects our political process, from the current gridlock in Congress, to the rise of the Tea Party, to our Presidential elections, to the choice to invade Iraq and Afghanistan, to the shredding of free speech and privacy laws by the Justice Department and the NSA. Ultimately, in wishing to invest undemocratic power in an individual or entity who, by birth or by accident, has superhuman ability, the mythology suggests fascism more than democracy.

Yes, I just said it: Superman is secretly a fascist.

(I don’t think this was an outcome Shuster and Siegel intended or could have foreseen.) 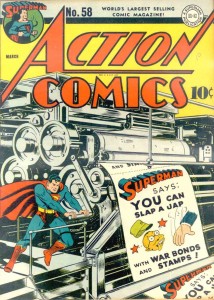 4.)   Superman has a racist past. See cover to the left. Also, see these Superman cartoons from the 1940’s: “Jungle Drums” and “The Japoteurs” by Famous Studios, Paramount’s animation division.

One of the great lies of American culture is the idea that discrimination leads to strong character and “nobility” among oppressed people. As Christopher Isherwood’s character George, the closeted gay professor in A Single Man, says to his shocked class in a lecture on minority relations, “Do you think it makes people nasty to be loved? You know it doesn’t! Then why should it make them nice to be loathed?”

Minorities sometimes attack other minorities, or attempt to place themselves in the mainstream at the expense of other outsiders. American history is full of cultural animosities sown in our vain attempt to attain the chimera of “Whiteness.”

5.) “Oh yeah?” you might be saying, “Maybe Superman was created by Jews but adapted by Christians in an American culture in which Christian mythology predominates.”

Considering how much of the Hebrew Bible was adapted by the early Christians to “prove” that Christ had “fulfilled the prophets,” this would seem to be an apt comparison. There’s nothing the Jewish people have created that we Christians haven’t found a way to appropriate for ourselves.

And how have Christians repaid Jews for giving us Jesus, Mary, Joseph, and the prophetic tradition on which the Gospels are based? Centuries of anti-Semitism: pogroms, Inquisitions, Holocaust. This is what makes the attempted claims of Superman as Christ figure disturbing: the familiar pattern of Christians appropriating spiritual figures of Jewish origin, then forgetting the specific cultural context of their origins to the point that they freely and guiltlessly practice anti-Semitism.

Shuster and Siegel were rolled over by mainstream American society as well. Despite giving Americans one of our most popular characters and mythologies, by the 1970’s they were forgotten and living in poverty. To avoid bad publicity when the Superman movie came out in 1978, DC Comics agreed to give them a modest pension, and began crediting them as Superman’s creators.

So, what we have in Superman is a beloved figure of Jewish ancestry who’s ethnic and religious origins were erased by white Christians, who’s creators and their descendants were discriminated against by mainstream American culture, who started as a beacon of hope in a dark time and became a capitalist icon.

Okay, maybe he is Jesus. 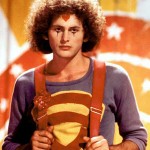