I remember as a child the sweet fragrance and stunning colors of the species Iris germanica, commonly known as bearded iris or Mary’s Sword. I can still recall my first encounter with them. Walking home from kindergarten, I stopped in the middle of the sidewalk, inhaled a wave of fragrance, and, sniffing the air, followed my nose.

Just a few houses up grew a garden filled with fans of blue-green leaves topped with a rainbow of sturdy flowering stalks. The surprised woman, whose garden I’d just invaded, told me they were bearded iris and showed me the fluffy beard on the petals. She then gave me a stalk—almost as long as I was tall—of deep purple blooms that smelled like grape bubblegum. I was hooked!

The hook was not only for irises, but gardens as well. Our family’s business was greenhousing, having an acre under glass. Not until that day did it occur to me that the plants that grew on the benches made their way into gardens. The seed of realization took root and I grew up with a love of plants.

For over 50 years the things of life were experienced in a garden. Joys and sorrows, growth and decline, prosperity or lean were all worked through with pant legs wet and hands muddied. The years included creating gardens for others, and since 2003 I’d worked the grounds at St. Francis Retreat Center.

This week my efforts as a gardener there drew to a close and I retired as the Garden Society Coordinator. I was drawn to this facility in response to God’s call to build gardens of visible prayer—not something one does alone. I had to come out of my private world, and once out, lead others to follow the vision. I told God I would do my part if he did his, and of course he did.

With the hands of those friends, thirteen gardens of prayer and memorial were built. Eventually the society moved from creating gardens into the phase of maintenance. And I had moved into decline—becoming more disabled by trauma-induced spinal arthritis. The effort to heft a thirty-five pound bag of fertilizer was now matched to a gallon of milk.

Resignation is never easy when giving up something you love. It was hard to walk away, but it was time to let it go into the competent hands of another gardener following God’s call, Anne Davich.

The other night at dinner—surrounded in prayers that I remain at peace and not get all weepy—I said good-bye. At table I sat near the groundskeeper, Tim Simon, who had shared the vision of gardens and beside whom I had worked for eleven years. He didn’t seem to mind that throughout the dinner I would pat his arm—it kept me calm and affirmed what we had accomplished. 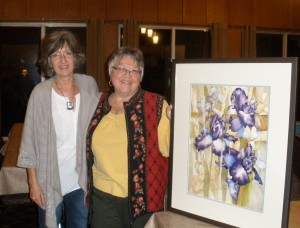 After Fr.Larry Delaney thanked me, I stood and thanked the volunteers for helping to bring souls to God through our gardens. I had not seen the artist of our society, Cindy Evans, leave the table, but I did see her return with a large framed painting. I knew immediately what they all had gifted—her iris painting!

It was one of her cruci-florals paintings (in which a cross is incorporated in the image of the flowers).  I’d seen its beginning in the basement studio at the retreat center. It was from a tied and tea-stained canvas that Cindy saw irises emerging: three flowers reminiscent of the Trinity, lance shaped leaves representing the swords of sorrow that pierced Mary’s heart, and the purple stalks of blooms representing power and strength—and title of her watercolor. I gasped in delight when I first saw the tan mottled canvas with pencil traced outlines of the blooms. We agreed that I would be the first one offered to buy it once completed. There at the party was her finished work, a gift from all.

The painting Power and Strength is hung in my oratory to the right of the altar and Divine Mercy image. I don’t know what God’s plans are for me as his gardener, but in the words of St. Faustina, “Jesus, I trust in you.” 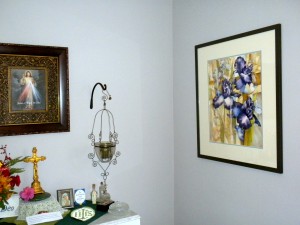 It was the Iris that ignited gardening in my heart, and here they were again, at the end of my journey. What a perfect gift to conclude a gardening life spent on knees, touching earth.

(Pssst…go to my earlier post, if you want to know how to grow them!) 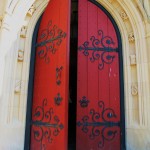