Intimacy of a Name

She was a full-bodied woman and reminded me of Oprah, as Sophia, in the Color Purple. Her one eye watered and drooped much the same as that character. Her walk was a shambling gait of exhaustion.

Her niece had brought her shopping for clothes. The three of us exchanged niceties among the racks of plus-size blouses and stretchy jeans. With shortened breaths she told her niece she wanted a colorful top, she needed color after being so long in dingy gowns. I too was shopping for a blouse, one of modesty for my ample bosom.

Having made my selection, and passing by the two women, I headed for the fitting rooms. The Oprah-esque woman complimented me on selecting one particularly bright blouse of reds and magentas, said it reminded her of mornings. The niece asked where she could find one for her aunt. Delighted to assist, I pointed out the nearby rack.

When I returned I saw the two women had been joined by three others. They stood clustered together in the main isle. As they talked the three would touch the big woman’s hands as the niece steadied her aunt by the elbow. Among prayers and “Praise the Lord” they asked her if she had seen The Pastor…they were from the local Baptist church.

As I looked though the racks of sweaters and vests I overheard bits and pieces of their conversation—I really wasn’t eavesdropping. Apparently sister Oprah-esque had been in the hospital for several weeks and was still unwell. When I heard whispers of “go ahead and cry” I looked up. Several sets of hands offered tissues to the woman.

I felt compelled to approach and hesitated. To move toward the five black women would be to intrude into their circle of friendship and disrupt the private sharing of compassion.

I asked God to guide my words, approached the group, and apologized for interrupting. There was a hard silence as they all lowered their gaze on me. I looked to the woman who was ill and asked if I, too, might be allowed to pray for her. She took a few seconds to look into my eyes, then down to my neck where a two-and-a-half inch crucifix hung.  While she sized-me-up I spoke again, and through the silence asked if she would mind giving me her name that I might offer prayers on her behalf.

To give someone your name is entrusting them with something very personal. Joanne McPortland recently wrote about the power of a name in her columns on the O Antiphons. The Antiphons are the seven prophetic chants that evoke the Messiah by one of his titles. In her second post she wrote:

Names mean something. In the ancient world, the cauldron of cultures where Israel took shape, all words were performative: they called into existence what they described. Names and titles defined relationship. One’s true name was a word of immense power, guarded carefully. To entrust another with one’s name was an act of the deepest intimacy because of the vulnerability such a revelation implied.

Intimacy has depth, it carries trust. Those five women shared an intimacy; they knew each other by name and in life. When we hear our name spoken with kindness, the loveliness of hearing it makes our heart flutter. We think, maybe unconsciously, someone knows me and wants me.

The sick woman would be giving her name to a stranger. She would be entrusting spiritual intimacy to me, a woman she knew nothing about.

I exhaled—not realizing I had been holding my breath—and nodded.  I pulled pen and pad from my purse and felt blessed as she, seeing me writing, gave her middle and last name as well.

I thanked them all for allowing the interruption and for giving me the opportunity to pray for Mae. I walked away and heard their voices return to the chattering of friends. Before I left the store I gave the sunrise blouse to the cashier, and indicating, told her it was for Mae.

Once home, I taped the note with Mae’s name to the prayer board. It hung beside the handwritten column of others for whom I pray. The names on that board are spoken each morning for those in need. I know little or nothing about most of those I lift up to God. But there is a spiritual intimacy in praying for a soul, in speaking their name, and I gained a new affection with Mae. 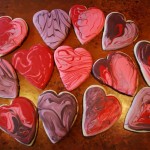