Dyed Orchids and Dying to Self 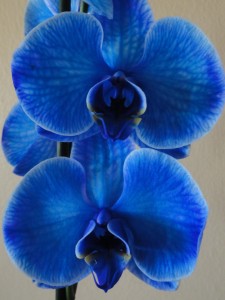 In the west window atop the stairs are shelves for growing houseplants, one being a white phalaenopsis orchid. I am drawn to the simple elegance of its white flowers along a gently arching stem.

Shopping at Meijer’s a few days ago I walked through the florist section. On a three tiered table were white orchids that had had their stems injected with dye. Their flowers were a garish crayon blue or purple and the leaves a greenish-black. I thought they looked absurd.

A woman shuffled into the area. Her thin and sunken appearance offended me—she smelled like a hangover from a two day binge, and her clothes told the same story. With exaggerated gestures she loudly proclaimed the beauty of the blue-dyed orchids.

When she had finished her monologue I looked at her, and without care told her they were an abomination and ugly. She prepared to do battle. Perfectly annoyed, I rolled my eyes and walked away.

It wasn’t until I was half way across the store that I stopped…what had I just done? Why in the world had I thought it permissible to be so rude? So judgmental? It would have been so easy to simply nod in agreement and allowed her continued happiness over blue orchids.

It is the irregular kind of people that bring out the worst in me. There are times when my reaction is not very Christian, and immediately after I think, “Who am I?!” My heart holds one truth and my actions speak much louder of another.

It’s the problem of duplicity, which again had come to the surface while I prepared to become an oblate. What is the identity, the wholeness of my true self that I will bring to the altar on the day I profess? Who am I as a gift offered to God?

Not a very good one when I behave like that.

A lot of this questioning is about regaining an identity that was not nurtured. An identity lost in formative years when patterns of dysfunction were laid down and cemented with doubts. I remember a day when I had come early to Adoration and unexpectedly found the therapist I had been working with was also there to pray. I felt compelled to express my gratitude for his guidance, and the words I spoke surprised me. I thanked him “for healing who I am.”

Who is the “I am” that I bring to God? Before the altar, in Adoration, or in receiving communion there is a singularity to my personhood—I am fully exposed, fully vulnerable, and fully intimate with Our Lord. In the presence of an unfamiliar world much of who I am is hidden on the stage of anxiety.

My gift of self being offered to God was first his gift, whole and complete, to me. It is not for him to discover who I am, but for me to find and give back what I can of that wholeness. To be the entire person he imagined into existence is to live an honest identity.

I question myself often. Are decisions fear based or grounded in truth? Do I embrace the identity of celibacy because I have not outgrown the fear of intimacy? Is my comfort with solitude in line with my nature or an avoidance of further harm? Do I choose being anonymous in the process of bringing souls to God out of humility or because I am apprehensive to proclaim The Word? I believe my striving is in earnest and that Truth will bear out—eventually.

Today’s ugly truth is that I judged the Love-Blue-Orchids-Lady. I regret my uncharitable behavior and pray the Lord never considers me with such flippancy. 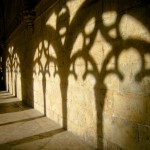 February 25, 2014
Tuesday's Prayer for Sisters and Nuns
Next Post