Wilting in the Bright Light of Annie’s Need

Exiting my car at the women’s care facility, I saw there were plastic grocery bags sitting atop a picnic table, in the shady end of the lot. Within them were dozens of perennials that had been dug from someone’s garden. The bags were crumpled, the cardboard boxes were warped, and the plants they contained were wilted; the soil dried. I looked around the grounds for evidence of a new garden, but nowhere was there fresh turned soil, waiting to be planted.

It was a kind and thoughtful gesture of someone, to bring flowers to the facility and so enhance the lives of women who resided there.  But it appeared to be an incomplete act and not thought through. Many of these women were not physically or mentally capable of planting a garden on their own. The facility was too poor for an activities director, let alone a horticultural therapist.

The blooms on a few clumps of bright yellow daisies had wilted and flopped over the edge of the table. In a way their sad droops reflected my feelings at the moment: an external, bright and cheery demeanor, withering from an incomplete transplant after an uprooting.

I am very much out of my element when interacting one on one with the poor, preferring to be anonymous and hidden. Taking telephone calls as a St. Vincent DePaul Angel is more to my liking.

And yet, here I was.

I had answered a calling — sensed on my way home from Adoration — to stop here and offer myself as a pray-er with these women. I have since been asked to companion a Catholic woman my age (let’s call her Annie), who struggles with schizophrenia. As I crossed the parking lot to the brown brick building, I mentally prepared for the hour ahead.

Annie is a large and petulant woman who has lived in group homes most of her life. She is well aware of her mental disabilities and limitations, and I am made aware of them as well. She is filled with fears – multiple — always anxious, and obsessed with all things Jesus. When I visit her she rocks resolutely in her chair, and prattles loudly and non-stop for the duration.

One day, I knocked on the side of her open door, stepped in, and found her sitting naked on the bed. She yelled and slapped a t-shirt against her thigh; she was having trouble getting the shirt over her head, and it made her angry. She was frightened that men would come in, and force her to have intercourse. I turned my back and leaned against the door frame, assuring her repeatedly, and in a low voice, that I would keep “the men” from entering while she dressed.

Eventually, her yelling lessened. When she had dressed, she asked if I would please come into her room and see how she had “made it nice” by putting up pictures

She had. Scotch taped to the tan walls were prayer cards, magazine pages, and old creased and worn prints. On the window sill were two identical six-day glass religious candles, four miniature statues, and several small kitschy objects. All of them, every single item, depicted the Sacred Heart of Jesus.

If one was to have an obsession, I thought, this was a good one!

Sitting across from her as she rocked and prattled on, I realized how ill equipped I was to be anything to this woman. In the presence of over thirty sets of Jesus’ eyes, I felt ridiculous and useless. I didn’t have what it takes to feed a soul like hers.

I felt small in the enormity of her challenging life: schizophrenic, developmentally halted, adopted and sexually abused, and finally abandoned to government assisted living.

Against that broad misery, how narrow my life felt! The charity of my heart, the sacrificial offerings, and the prayers for those in need – these actions had, for the most part, taken place in seclusion. This episode with Annie made me realize how limited my heart has been, and why God may have called me here.

What I am learning is the practice of a Ministry of Presence, and I expect to be stretched to my limit. Like the fading flowers I had seen in the parking lot, I have been uprooted from the shady, safe soil. I am in mid-transplant – slightly shocked and longing for what is familiar, but willing to wait for the Master’s planting schedule. Please pray for me.

September 2, 2014
Tuesday's Prayer for Sisters and Nuns
Next Post 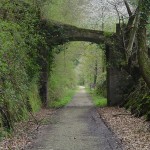 September 4, 2014 Thursday's Prayer for Priests
Recent Comments
0 | Leave a Comment
"Thank you, Margaret. With all the ugliness that's happening right now, some up-close beauty from ..."
Barb S Decompressing; Photos in a Garden
"Who can pay even that!?"
Nina Stout Medicaid Burn: Spend Down What?
"This is a haunting and beautiful piece. Thank you, Margaret."
Michelle Mercy and Full Moon Crosses
"Beautiful, Margaret. Thank you."
Dena The Epiphany and the Gift of ..."
Browse Our Archives
get the latest updates from
Morning Rose Prayer Gardens
and the Patheos
Catholic
Channel
POPULAR AT PATHEOS Catholic
1