Untie Those Expensive Shoes and Drop that Ball 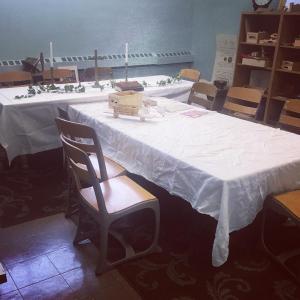 Matt is obsessed with the Ed Young basketball sermon phenomena. He keeps sending me clips and tweets, though mercifully no whole sermon (yet). And then this morning he thought I should read this long depressing article about Ed Stetzer’s dubious relationship with Harvest Chapel. And, of course, I can’t stop looking at pastorNsneakers on instagram, as I confessed yesterday.

It’s an guilty decadent juxtaposition to indulge myself in gawking at the wealth and extravagance of modern ‘Christian’ expression at the same time as preparing for a somber and difficult week of remembering the Lord’s Passion. Jesus, unhappily, did everything backwards from how I would have done it.

In Sunday School this past weekend, I and my tiny group of little girls fitfully pondered Jesus’ overturning instructions to his disciples in Luke. He’s just instituted the Eucharist, and while that was going on—because of course—a non-sequitur ‘dispute’ arose amongst them about ‘who is the greatest.’ Jesus tells them to be different from the world. Among you, he says, the greatest will be as the youngest, will be as one who ‘serves.’ I had two youngest girls in my class and I explained that in the time of Jesus, if the house had no servant, they each would be the ones to wash everyone else’s feet before the evening meal. They shuddered, as indeed we all do. My youngest isn’t given so much to serving as to telling other people what they should be doing.

I asked them what they thought it means ‘to serve.’ It’s not a category we are familiar with, even in restaurants, where the person who serves is really your friend, and very often your judge, and you feel bad about being the one sitting down, at least I do.

One of my Sunday school girls said she thought it was like how Jesus ‘served up’ his body and blood on the cross. He gave everything for his friends, his very life. Then I asked how we could count other people as more important than ourselves, and another little girl thought that confessing and repenting of sin might be a good way.

I’ve chewed on this all week. Repentance as the road to humility? Can’t I just keep on my feet all day, making sure everyone has what they need? Isn’t that what Jesus means?

I like that they don’t give me pat answers, these young thoughtful Christians. They try to think it out, and often we—including me—go away with some of our questions unanswered.

Repentance is the heart of the Christian life, though, because of the tragic business of being so often in the wrong. Just by getting up and walking through the day with all of creation orbiting around the self, before my feet hit the ground I’ve sinned against my neighbor. With eight people in this house, we clang into each other, and before 7:30 in the morning have accumulated each a little rubbish heap of sin. Counting each other as more significant does have to begin with apologies, and swallowing down the bitter surrender of rights and what is fair. If you don’t repent, you can’t really move forward even to the next task.

But if Jesus is passing you a basketball—which is such a bizarre thing—you are still the center of your universe, everything, including God, orbiting around you. And what is the hoop? Winning? Is there victory in the Christian life?

I mean, there is. I felt faintly victorious on Sunday with my little class, though, unfortunately, I couldn’t exactly take any credit for their thoughtfulness and engagement with the text. I was happy, though, because I showed up. Jesus passed me the ball…and I stopped to eat a hard boiled egg and suck down a cup of coffee before…sorry, the basketball metaphor does not work for me.

I love the humiliating juxtaposition between the life of Jesus—but particularly his passion—and celebrity pastors rolling in money and basketballs and Harley motorcycles and stages built for sermon series. I recently watched a Harvest Chapel sermon where MacDonald came out on the stage with a yoke that he plunked heavily down on the shoulders of a volunteer, loaded it up with props from a heavy-laden table and shouted at the congregation, or is it the crowd. He made them all feel bad about not trusting Jesus using—get this—the bit where Jesus says that his yoke is easy and his burden is light. They all applauded his cleverness. It wouldn’t be comprehensible without a gimmick, I guess. Everyone would walk away and wouldn’t care.

Which is literally what happens in the final week of Jesus’ life on earth. He is left alone, stripped of all honor—naked, beaten, poor, abandoned, reviled, and finally dead. That’s our Savior. He has to be in that place because that’s where we are, spiritually. We, who are nothing, are trying to make ourselves everything.

The only way out is to repent. To say sorry. To untie the expensive shoes, put them back in the box, and let the naked feet and the naked heart be exposed to Jesus who doesn’t have a ball—my goodness—but who gave his very own body for the spiritual food and drink of the poor, starving, selfish human creature.

I guess it’s only Wednesday, and Wednesday night church isn’t a thing any more, so instead I’ll limp into my school room and begin again to do the work in front of me, which is trying to take the lowest place in a world not just of idolatry, gimmicks, and instagram, but of my own selfish, wasteful, hard-heartedness. Thank goodness Jesus is right there at the heart of it, mercy and forgiveness flowing out of his very body. 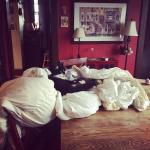 A List of Sins from the...
Christian Crier
Books by This Author Books by Anne Kennedy 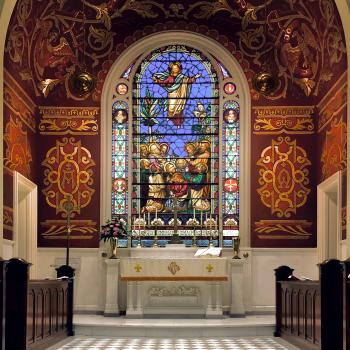 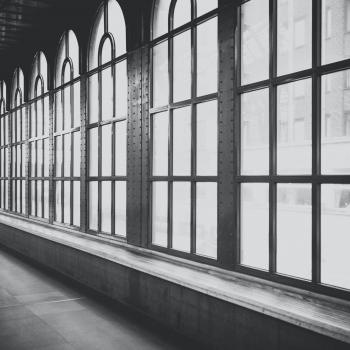 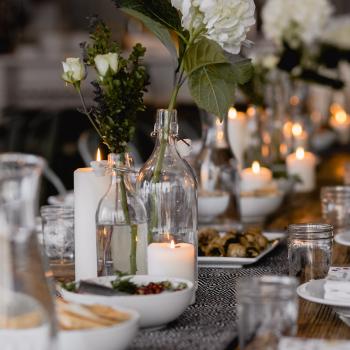