“Jokes were made about the capitalist candidates but once laughter fills the room the expectation is that we embrace the wicked truth behind the joke – that there is no authentic choice and that democracy is purchased by the highest bidder – and begin to see it as justifiable and good; after all, you can’t upset the capitalists too much before seeing donations to your organizations and cathedral restorations cut.

“In 2013, Pope Francis said, “How I would like a Church which is poor and for the poor!” A church that is poor does not have to compromise its prophetic witness to keep donors happy, nor worry about losing material goods as some possible punishment for denouncing the injustice built and reinforced by our economic and political power structures.

“It is a shame that we did not get to hear from third party candidates or get introduced to the poor of New York- the latter are those who receive the Gospel from Christ – on the livestream of the Al Smith Foundation Dinner.
Concerning third party candidates, Alfred E. Smith IV joked about Libertarian Gary Johnson being invited, but not knowing where New York was.

“More importantly, of course, were we to listen to the word of the poor and receive the gospel, perhaps the Al Smith dinner would cease to exist. Perhaps we would be so passionate about justice that we would care for the planet, pay just wages, and charge fair prices thus decreasing poverty but, alas, perhaps decreasing excess material wealth. […]

“You see the bourgeoisie coming to the aid of decent charity groups, while their intermediaries offer the kindest words on behalf of the generous capitalists, capitalists who purchase the propagation of their self-serving narrative and, when criticized, its defense – all in the name of philanthropy. […]

“I know no better way than to respond to this last praise of the capitalist donor than by including a small story noted by the Servant of God and co-founder of the Catholic Worker, Dorothy Day, which I am reminded of whenever I hear about “charity” from those who defraud the poor…” 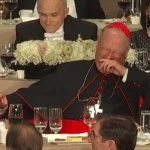 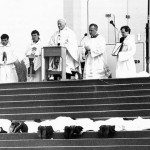 October 21, 2016 On the feast of Saint John Paul II: If You Want Priestly Vocations, Reject Capitalism!
Recent Comments
0 | Leave a Comment
Browse Our Archives
get the latest from
Catholic
Sign up for our newsletter
POPULAR AT PATHEOS Catholic
1