At Least Hide the Children

During the court proceedings (Abington v. Schempp) in which the U.S. Supreme Court finally ruled that prayer and Bible reading in public schools were unconstitutional, Dr. Solomon Grayzel gave expert testimony about the effects readings from the New Testament on Jewish students. According to the opinion delivered by Justice Tom C. Clark, Dr. Grayzel explained that “material from the New Testament could be explained to Jewish children in such a way as to do no harm,” but that without explanation, those passages could be “psychologically harmful.”

Since the readings in Pennsylvania’s public schools were generally from the Psalter — I experienced this during first grade at John Fitch Elementary, by second grade the court had ruled and local districts had complied — Dr. Grayzel might not have had to consider the effects of readings from the Old Testament on all school children. After reading familiar passages about Abram and Sarai snickering at God’s promise of a son, I do wonder about those old arguments that Protestants used to make (and still do) about the moral framework that the Bible has supplied for the West generally and American society in particular. Wouldn’t children hearing that story (Gen 18) be reminded of Eve’s own unwillingness to obey God? But what about the subsequent stories of the angels visiting Lot in Sodom (Gen 19)? This is not PG material even if it is not as morally challenging to youth as Abraham tricking Abimelech (Gen 20) or caving to Sarah’s pressure and sending Hagar and Ishmael away. (What about two-parents and family values?) This is not to say that these passages are any easier for adults to fathom. But if you tend to regard the Bible as a manual of moral instruction, you might be tempted to do for the Old Testament what Thomas Jefferson did for the New.

Then again, I have long admired how the Israelites were willing to acknowledge the warts and more of their heroes (and Christians as well, apparently by including the likes of Abraham in the Wall of Faith — Hebrews 11). Americans are not so forgiving with our popular figures — celebrities and public officials. Just think back to the controversy surrounding Joe Paterno, who lost his job and reputation because he knew about something wicked but did nothing about it beyond following tepid procedures. In the U.S. we have a one-strike and you’re out of public grace. Maybe if Americans really did think of themselves as the New Israel (though I don’t recommend this), they might have a longer leash for their heroes.

(Image: By PSUMark2006 at en.wikipedia [Public domain], from Wikimedia Commons) 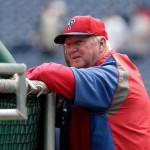 February 3, 2015 Who Says Evangelicals Have all the Bad Liturgy?
Recent Comments
0 | Leave a Comment
"I can never keep myself from being annoyed by the disingenuousness of the "complementarian" label. ..."
NorrinRadd Are Complementarians America’s Taliban?
"All of the LGBTQ sexually are mentally ill ( have a depraved mind ). And ..."
D.M.S. Being Evangelical, Being Gay
"What did he contribute?"
Roger McKinney Is David French the Best Judge ..."
"That's because French was and is part of the "Cult of Bush.""
Johnny Davis Is David French the Best Judge ..."
Browse Our Archives
Related posts from Putting the Protest in Protestant