Have the Worship Wars Returned?

The peak of controversy among Protestants over worship (especially Praise and Worship versus traditional) was the 1990s. By then, the rise of Jesus Rock and other popular Christian music from the 1970s had trickled into the evangelical mainstream to be adopted by megachurch icons like Bill Hybels at Willow Creek. At the time a member of a Reformed church in nearby Wheaton, Illinois, I still remember the pressure to conform to Willow Creek’s casual style and popular music if we were ever to “keep the kids.”

Since the 1990s, I had assumed the advocates of contemporary music had won the war. Yes, the peace treaty resulted in blended worship, a mix of contemporary songs projected on walls and led by praise bands and an occasional dip into the hymnal. But no one (seemingly) embraced older forms of Protestant worship with liturgies, chanted Psalms, and weekly observance of the Lord’s Supper. The only encouragement traditionalists might have taken from the end to worship war was a sense of fatigue among the advocates of contemporary worship. That feeling of novelty only lasts so long and yet contemporary worshipers did not seem to keep looking for the next new thing. Instead, the point of Praise and Worship seemed to have been to include in services songs that boomers had sung when in the 1970s they were going to Christian youth rallies.

But a younger generation is showing some discontent with the prevalence of contemporary worship. To encourage their liturgical sensibilities, what follows is an excerpt from twenty-five frigging years ago, a time when Hybels was in the early stages of popularity, Tim Keller was getting running in New York City with “evangelistic worship,” and John Frame was finishing a draft of his defense of contemporary worship:

What do Billy Graham and Stanley Fish have in common? According to most assessments of the ongoing culture wars the answer would be an emphatic “not much!” With the exception of a few demographic details — both are older white men living in North Carolina — little seems to unite these two figures or the movements for which they have become figureheads. Graham is, of course, the patron saint of America evangelicalism, the one who as an object of admiration or scorn determines what it means to be an evangelical. And Fish, professor of English at Duke University of deconstructionist, post-modernist fame, has become one of the principle cheerleaders for efforts within the academy to make the literary canon specifically, and the humanities more generally, more inclusive and less oppressive. Identified in this way, the constituencies to which Graham and Fish speak would appear to be about as far apart as Newt Gingrich and Hillary Clinton.

James Davison Hunter, for instance, argues that evangelicals are a large part of the orthodox constituency which defends the traditional family, opposes political correctness and multi-culturalism in the academy, and supports efforts to cut federal funding for objectionable art. This explains why they have lined up in bookstores across the land to buy and read to their children William Bennett’s Book of Virtues. Thus, evangelicalism, at least in the common configuration of the ongoing culture wars, is the antithesis of the cultural left.

Why is it, then, that when evangelicals retreat from the public square into their houses of worship they manifest the same hostility to tradition, intellectual standards, and good taste they find so deplorable in their opponents in the culture wars? Anyone familiar with the so-called “Praise & Worship” phenomenon (so named, supposedly, to remind participants of what they are doing) would be hard pressed to identify these believers as the party of memory or the defenders of cultural conservatism. P&W has become the dominant mode of expression within evangelical churches, from conservative Presbyterian denominations to low church independent congregations. What characterizes this “style” of worship is the praise song (“four words, three notes and two hours”) with its mantra-like repetition of phrases from Scripture, displayed on an overhead projector or video monitors (for those churches with bigger budgets), and accompanied by the standard pieces in a rock band.

Gone are the hymnals which keep the faithful in touch with previous generations of saints. They have been abandoned, in many cases, because they are filled with music and texts considered too boring, too doctrinal, and too restrained. What boomers and busters need instead, according to the liturgy of P&W, are a steady diet of religious ballads most of which date from the 1970s, the decade of disco, leisure suits, and long hair. Gone too are the traditional elements of Protestant worship, the invocation,confession of sins, the creed, the Lord’s Prayer, the doxology, and the Gloria Patri. Again, these elements are not sufficiently celebrative or “dynamic,” the favorite word used to describe the new worship. And while P&W has retained the talking head in the sermon, probably the most boring element of Protestant worship, the substance of much preaching turns out to be more therapeutic than theological.

Of course, evangelicals are not the only ones guilty of abandoning the treasures of historic Protestant worship. Various churches in the ELCA and Missouri Synod have begun to experiment with contemporary worship. The traditionalists in Reformed circles, if the periodical Reformed Worship, is any indication, have also begun to incorporate P&W in their services. And Roman Catholics, one of the genuine conservative constituencies throughout American history, have contributed to the mix with the now infamous guitar and polka mass. Yet, judging on the basis of worship practices, evangelicals look the most hypocritical. For six days a week they trumpet traditional values and the heritage of the West, but on Sunday they turn out to be the most novel. Indeed, the patterns of worship that prevail in most evangelical congregations suggest that these Protestants are no more interested in tradition than their arch-enemies in the academy. (“Evangelicals on the Durham Trail,” Calvin Theological Journal, 1995) 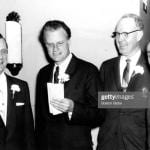 January 9, 2020
The Ghost of Harold John Ockenga
Next Post

January 17, 2020 Still Inadequate
Recent Comments
0 | Leave a Comment
Browse Our Archives
get the latest from
Putting the Protest in Protestant
Sign up for our newsletter
POPULAR AT PATHEOS Evangelical
1