Politics and not Religion

What if economics and geography matter more than religion for electoral outcomes? Ken Woodward discussed that point in a recent article for Commonweal. What follows is an excerpt that bears particularly on the evangelical electorate. For more of Woodward’s thoughts about religion and politics, and especially the place of Roman Catholicism in the United States, listen to this discussion at the Religious Nationalism Pudcast.

The emergence of the Evangelical vote—or at least the white portion of it—would appear to contradict my contention that religion is no longer a significant factor in presidential politics. After all, exit polls taken in November 2016 showed that four out of five white Evangelical Christians voted for Donald Trump—and did so despite his long history of philandering, his manifest lack of character, and his equally manifest disinterest in religion. As more than one newspaper editorial asked: Does this vote not demonstrate the moral hypocrisy of white Evangelical voters?

Not necessarily. As any political scientist will tell you, exit polls are notoriously crude instruments—crude both in the questions they ask and in the hiring of those who ask the questions.

To begin with, white Evangelicals are the most religiously diverse group in this country. They include not only your standard-brand, born-again Baptists and most non-denominational Protestants, but also many Methodists, southern Presbyterians, Episcopalians, Quakers, and a whole lot of Pentecostals—plus a hefty chunk of Catholics who self-identify as Evangelical or Born Again when pollsters ask. (Political scientist Corwin Smidt of Calvin University puts them at 20 percent of those who answer to the “born again” label.) Once a movement and for a time a subculture, Evangelism today is better understood as an imagined community of post-denominational Christians in which almost anyone who chooses to can claim membership. For example, I suspect that most of the 42,000 members Joel Osteen claims for his mega-church would identify as Evangelicals, even though the self-improvement and prosperity gospel Osteen preaches is not easily reconciled with Christian beliefs and practices.

More to the point, although exit polls can give us an early snapshot of how many who identify broadly as this or that voted for a candidate, they do not tell us why. A category like “the Evangelical vote” is misleading precisely because it presumes that being Evangelical is why a citizen voted the way she did. But there are several plausible non-religious reasons why a white Evangelical might vote for Donald Trump. As social scientists like to say, their vote was overdetermined.

One of those reasons is habit. Beginning with the transformation of the Democratic Party in 1972, and especially since the rise of the Religious Right four years later, conservative white Evangelicals have grown accustomed to pulling the Republican lever—just as from FDR to McGovern, most Catholics were mortised into the Democrats’ New Deal coalition. And the Republican Party has returned the favor: if not exactly giving white Evangelicals a place at the table, the GOP has at least allowed them to say the blessing. Conversely, it’s not as if the Democratic Party has put out the welcome mat for white Evangelicals—or, for that matter, for pro-life Catholics.

Geography and demography also play a role. White Evangelical voters skew older than most Democrats, and most of them live in red states. One does not expect white Evangelicals in Alabama or Arkansas to vote for a Democrat for president any more than one expects Irish Catholics in Boston to vote for a Republican.

Even more relevant is the economic factor. As I wrote in Commonweal in May 2018 (“How Religion Got Trump”), a third of white Evangelicals earned less than $30,000 a year in 2016—at a time when the poverty line was $24,250 a year for a couple with two children. And more than half (57 percent) earned less than $50,000 a year. Like most blue-collar workers, they hadn’t seen a real-wage increase since the 1970s. When Trump promised to “Make America Great Again,” a large number of white working-class voters—especially in Rust Belt states—heard more jobs and better pay.

This view is supported by a survey of white Evangelicals conducted by LifeWay Research, an Evangelical organization, in November 2016. Asked what one issue they considered paramount in the election, nearly half of respondents named the economy or national security. A similar poll by Pew found that the paramount concerns of most white Evangelicals were terrorism, the economy, and immigration. By contrast, the issues most important to the white Evangelical pastors polled by LifeWay were the personal character of the nominee and Supreme Court appointments. In sum, most white Evangelicals voted their pocketbooks, and the difference between their concerns and those of their pastors says a good deal about how unimportant church pulpits can be in presidential politics. When a significant segment of the working-class population feels that they can’t provide their children with the kind of future they see other people’s children enjoying, a candidate can muster a politics of resentment—which is exactly what the Trump campaign did.

At the same time, of course, some portion of the white Evangelical community heard Trump promising to make America white again. But why limit the race card to Evangelicals? A majority of white mainline Protestants also voted for Trump, though not by nearly as wide a margin; and among Catholics, non-Hispanic white voters chose Trump over Clinton by a whopping 56 to 37 percent.

Yet another factor to account for is social class. In an essay on elitism in the Democratic Party published last January in the New Republic, Democratic labor lawyer Thomas Geoghegan reminds us that we are a nation of high-school graduates, not college graduates, and that close personal ties across the educational gulf separating one class from another are as rare for Democrats as they are for Republicans. As Geoghegan notes, only 30 percent of Americans aged twenty-five and over have degrees from a four-year college, even though 70 percent of high-school graduates enroll in one sort of college or another. Whatever a student may actually learn in four years of college, a diploma still determines one’s economic prospects. The lack of a college diploma also defines what one is likely to suffer. Among the not-so-hidden injuries of social class are early deaths from suicide, alcoholism, and drug use—what economists Anne Case and Angus Deaton call the “deaths of despair” that now characterize the lives of so many in the white working class.

If, as I have argued, white Evangelicals had reasons other than religion to vote for Trump in 2016, how should we reckon with “the religion factor” in this year’s race for the White House? Beginning in the 1980s, John Green, Corwin Smidt, and two other social scientists from Evangelical backgrounds began refining the data on Americans who identify as Christians, distinguishing, for example, Southern Presbyterians, who are typically conservative in both their beliefs and their politics, from their more liberal fellow Presbyterians in the North. Green and his colleagues also established a useful spectrum of religious commitment—from the totally uncommitted, through the 50 percent of Americans whose commitment ranges from somewhat relaxed to vaporous, to the religiously committed. In a similar fashion, the folks at Pew have been experimenting with fresh categories like “the Diversely Devout” and “the Relaxed Religious,” to capture the various modalities of what the British scholar of religion Paul Gifford calls the “hollowed-out” nature of American Christianity.

Green estimates that no more than 17 percent of adult Americans now qualify as “religiously committed.” We’re not talking about Mother Theresas here. We’re talking about Christians and Jews and Muslims who place religious belief, behavior, and belonging at or near the center of their lives. By contrast, Green estimates that roughly 20 percent of adult Americans identify as Nones—meaning they claim no religious affiliation or identity. Although many of these say they are “spiritual,” and some say that they believe in God, it is unclear what sort of god they are talking about or what being spiritual means. In any case, it is not clear how, for example, following a spiritual regimen of morning meditation and afternoon yoga correlates with—much less inspires or explains—political preferences.

If it’s true that only about 17 percent of adult Americans are religiously committed, then we find ourselves, two decades into the twenty-first century, about where we were at the end of the eighteenth. Obviously, there are important religious differences between that era and ours. But the similarity should alert us to the peril of assuming that religion can be politically significant in a society that isn’t all that religious in the first place. 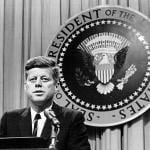 October 16, 2020
Why Doesn't Joe Biden Talk about Faith the Way the POTUS who Inspired Him Did?
Next Post

October 28, 2020 Virtue Hiding
Recent Comments
0 | Leave a Comment
Browse Our Archives
get the latest updates from
Putting the Protest in Protestant
and the Patheos
Evangelical
Channel
POPULAR AT PATHEOS Evangelical
1

Let's Talk about the Occult--Theologically
Roger E. Olson
Related posts from Putting the Protest in Protestant