Maybe Dr. DuMez Has a Point

But perhaps white evangelical misogyny and masculinism is really a symptom of being American, not something peculiar to born-again Protestants:

Another long- standing exceptionalist theme has been the virtue of reinvigorated masculinity in imperial discourse. These enduring preoccupations in American foreign affairs stem at least in part from educated men’s desire to vindicate their manhood in a society suspicious of thought, from Theodore Roosevelt’s Strenuous Life to John Kennedy’s New Frontier to George W. Bush’s “Mission Accomplished.”

In each case there was celebration of unthinking activism, preferably military, as a source of renewed vitality; the refusal of reflection as effeminacy; an obsession with toughness as an end in itself. At its most extreme, this longing for revitalized manhood led to a veneration of war as “a purifying, invigorating, unifying force,” in Kinzer’s words. In recent years, some women in Washington have also felt compelled to embrace a reified masculinity—a bias toward action rather than reflection. This sounds benign enough until one realizes that the action in question, as in Iraq, is usually military, often mistaken, and rarely reversible. (Jackson Lears, “How the Us Began Its Empire,” review of Stephen Kinzer, The True Flag: Theodore Roosevelt, Mark Twain, and the Birth of American Empire, New York Review of Books, Feb. 23, 2017)

October 28, 2021
The Optics and the Reality of Evangelical Elites
Next Post 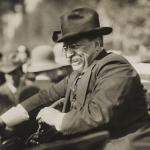