I appreciate Jeff Polet’s point about the problems of talking about an American Founding:

A political “founding” is artisanship, and the artists are typically tyrants, for violence is the means of such fashioning. Many of history’s great “founders” have the reputation of being tyrants. One of the central problems for political thinking, therefore, is whether a just regime can ever result from unjust origins—namely, the application of violence in accordance with the vision of one person. This problem forms a central concern of Cicero, who postulated the idea of a Golden Age as its solution. We see it as well in Augustine’s City of God, where he resolves the problem by distinguishing sacred history from secular history, the former linear and the latter a cycle of rises and falls.

But for whatever reason, Americans tend to think about the nation as having a founding moment. Maybe this is just a synonym for “beginnings.” In that case, it could be that founding really means genesis and in the biblical sense of that word, Genesis is the beginnings of both humanity and God’s covenanted people.

Whatever the reason for thinking of an American Founding, considerations of its Christian character is not limited to those dangerous white nationalist evangelicals who voted for Donald Trump. It even comes easily for Roman Catholics. And the thing is about Roman Catholicism in North America, it could have come from either French or Spanish sources. Here is the French version (in part):

As a student in the fourth grade of Saint Thomas Aquinas School in East Lansing, Michigan, I looked about me and saw a great landscape whose meaning lay in the saints who had moved across it and prayed within it. Michigan, you see, is a Catholic country, and America a Catholic land.

So much at least did we learn under the instruction of Mrs. Rambo, the Americanized spelling of whose name thinly veiled her French ancestry. As she taught us our Michigan history, we learned with some pride that ours was the only state that could put “three square meals on the table” from what was raised and grown within its borders. But that achievement in autarky, in sufficing for ourselves, great though it was, paled in comparison with the many other astonishing tales we were told—tales that taught us that what man may do for himself, by his own hard work, is nowhere near as thrilling as what God may do by grace for and through those who serve him.

For Michigan, surrounded by the Great Lakes, was among the places the French missionaries and traders came centuries ago, moving by canoe along the navigable bodies of water, to encounter the Indians, trade with them, live alongside them, and instruct them in the gospel. This communion of the French Jesuits with the Indians was one of several founding moments of America. The Jesuits at every opportunity consecrated places and events to Our Lady, no such instance of which is more striking than Jacques Marquette’s naming the Mississippi the River of the Immaculate Conception. Through these acts of prayer, this offering of the land to the Mother of God, they consecrated America, piece by piece, as a Catholic country.

Mrs. Rambo’s instruction was so winsome that when our studies led us at last to the French and Indian War, we all naturally sided with the French and Indians, those Catholic peoples, against the British, those redcoats, those aggressive Protestants, who would in the end succeed in exiling the true faith to Quebec. When we learned of the American Revolution soon thereafter, our allegiance remained the same. George Washington, I suppose we must have thought, was casting off the yoke of a Protestant monarchy to make possible what we were all actually experiencing, right there, in the flats of southern Michigan: the freedom to be a Catholic people in a land consecrated by saints. . . .

The land I looked out on through my classroom window years ago may have been a land of saints, but, in many ways, it was also still a land of “redcoats.” But I was not looking with merely human eyes, but with the eyes of the Church, the eyes of the saints who came to this place before me. I was seeing what this place, by their naming it for the Mother of God, would someday—will someday, and only after a long and slow gestation—come at last and forever to be.

It is peculiar after almost 250 years of U.S. history to think of America as a Roman Catholic country. But evangelicals are not the only ones to think of their nation in Christian categories. 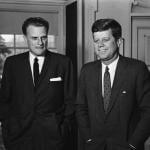 February 4, 2021
When Roman Catholics Feel a Little Protestant (and even Trumpy)
Next Post

March 5, 2021 Was America Founded A Roman Catholic Country? (with a Spanish accent)
Recent Comments
0 | Leave a Comment
"I can never keep myself from being annoyed by the disingenuousness of the "complementarian" label. ..."
NorrinRadd Are Complementarians America’s Taliban?
"All of the LGBTQ sexually are mentally ill ( have a depraved mind ). And ..."
D.M.S. Being Evangelical, Being Gay
"What did he contribute?"
Roger McKinney Is David French the Best Judge ..."
"That's because French was and is part of the "Cult of Bush.""
Johnny Davis Is David French the Best Judge ..."
Browse Our Archives
Related posts from Putting the Protest in Protestant