Was America Founded A Roman Catholic Country? (with a Spanish accent)

The previous post included the observation that tracing the United States’ roots to a Christian source other than English Protestants (read Puritans) is not merely limited to Trump’s evangelical supporters. It is a notion that appeals even to Roman Catholics. What is more, Christians in fellowship with the Bishop of Rome had two chances at a Roman Catholic founding of America thanks to the colonial enterprises of both France and Spain. While the former worked and settled in lands identified today with Canada (not to mention the American Mid-West), the Spaniards controlled parts of what became the American South, Central America (especially Mexico), and the American Southwest. The very first municipality in America, St. Augustine, Florida, was part of the Spanish empire. All of this means that the United States could have been a French-Speaking or Spanish-speaking country if not for the British defeat of the French in the Seven Years War (1756-1763) and the exhaustion of Spain’s colonial enterprise. The Dutch also had a colonial presence in North America but the English defeat of the Dutch in 1674 meant that New Yorkers had to buy new signs to replace the old ones that read New Netherlands.

The possibility of a Spanish founding for the United States was the source of inspiration for Jose Gomez, the Archbishop of Los Angeles, when he wrote about the Virgin Mary as the “Foundress of America“:

The story of Guadalupe is the story of America. The encounter of cultures, European and indigenous, began in December 1531, when the Blessed Virgin appeared to a poor Indian convert named Juan Diego on a hilltop outside Mexico City. She entrusted Juan Diego with a mission—to go and ask the bishop to build a shrine in her name. To convince the bishop, Our Lady gave Juan Diego a sign: She made roses bloom, even though it was the dead of winter. She used those roses to “imprint” her own image on the cloak—called a “tilma”—that Juan Diego was wearing. That tilma is still hanging, almost 500 years later, in the Basilica built not far from the site where she first appeared.

Writing in a time of chaos and conflict in the early Church, St. Jerome penned the famous line: “The whole world woke up and groaned, and was astonished to find that it was Arian.” We could say something similar about our times. It is as if we have woken up to discover that our society is no longer Christian. Of course, in many ways our nation has never lived up to Christian values. We could point to the original sin of slavery, to the tragic mistreatment of native populations, to ongoing injustices such as racism, and to the million or more abortions performed each year. Yet for all that, there is no denying that our institutions and self-identity were meant to be shaped by a vision of freedom and dignity rooted in the “laws of Nature and of Nature’s God,” to quote our Declaration of Independence. This is what is changing right now. We face an aggressive, organized agenda by elite groups who want to eliminate the influence of Christianity from our society.

As America faces spiritual crisis, some urge a return to the vision of the Founders. We would do better to turn to Our Lady, America’s true foundress. Our Lady did not appear only for the Mexican people. Her intentions were continental and universal. In the account that has been handed down to us—an account based on the testimony of Juan Diego—Our Lady told him: “I am truly your compassionate Mother; your Mother and the Mother to all who dwell in this land and to all other nations and peoples.” At Guadalupe, the Mother of God presented herself as the Mother of the Americas.

Guadalupe is the true “founding event” in American history. We are all children of Guadalupe and Guadalupe gives us the true history of America. In God’s plan, this hemisphere was chosen as the site for the building of a new civilization. A new world of faith.

February 25, 2021
Was America Founded A Roman Catholic Country?
Next Post 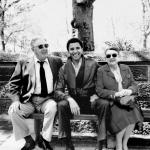 April 28, 2021 Obama Was Closer to King than to Biden
Recent Comments
0 | Leave a Comment
"I can never keep myself from being annoyed by the disingenuousness of the "complementarian" label. ..."
NorrinRadd Are Complementarians America’s Taliban?
"All of the LGBTQ sexually are mentally ill ( have a depraved mind ). And ..."
D.M.S. Being Evangelical, Being Gay
"What did he contribute?"
Roger McKinney Is David French the Best Judge ..."
"That's because French was and is part of the "Cult of Bush.""
Johnny Davis Is David French the Best Judge ..."
Browse Our Archives
Related posts from Putting the Protest in Protestant