Obama Was Closer to King than to Biden

In the category of timelines, notice what the conversation about race used to sound like. During the 2008 Democratic primaries, then Senator Barack Obama needed to explain his relationship to his Chicago pastor, Jeremiah Wright, whose remarks from sermons had gone viral. Wright had said and been recorded saying “God damn America” several times. That prompted Obama to give a speech about race that many still praise for its statesmanship, candor, and insight.

One outstanding aspect of the speech is Obama’s silence about police shootings or violence. In fact, he said that more black police and more police presence in poor communities were desirable. Those comments come from the section of the speech in which he described the greatest sources of discomfort for African Americans:

we do need to remind ourselves that so many of the disparities that exist in the African-American community today can be directly traced to inequalities passed on from an earlier generation that suffered under the brutal legacy of slavery and Jim Crow.

Segregated schools were, and are, inferior schools; we still haven’t fixed them, fifty years after Brown v. Board of Education, and the inferior education they provided, then and now, helps explain the pervasive achievement gap between today’s black and white students.

Legalized discrimination – where blacks were prevented, often through violence, from owning property, or loans were not granted to African-American business owners, or black homeowners could not access FHA mortgages, or blacks were excluded from unions, or the police force, or fire departments – meant that black families could not amass any meaningful wealth to bequeath to future generations. That history helps explain the wealth and income gap between black and white, and the concentrated pockets of poverty that persists in so many of today’s urban and rural communities.

A lack of economic opportunity among black men, and the shame and frustration that came from not being able to provide for one’s family, contributed to the erosion of black families – a problem that welfare policies for many years may have worsened. And the lack of basic services in so many urban black neighborhoods – parks for kids to play in, police walking the beat, regular garbage pick-up and building code enforcement – all helped create a cycle of violence, blight and neglect that continue to haunt us.

This is the reality in which Reverend Wright and other African-Americans of his generation grew up.

Also striking about the speech is Obama’s recognition that race relations in the United States had improved:

The profound mistake of Reverend Wright’s sermons is not that he spoke about racism in our society. It’s that he spoke as if our society was static; as if no progress has been made; as if this country – a country that has made it possible for one of his own members to run for the highest office in the land and build a coalition of white and black; Latino and Asian, rich and poor, young and old — is still irrevocably bound to a tragic past. But what we know — what we have seen – is that America can change. That is true genius of this nation.

In the current climate of The 1619 Project, someone cannot say what Obama said. Instead, many people say what President Biden did after the Derek Chauvin verdict:

It was a murder in the full light of day, and it ripped the blinders off for the whole world to see the systemic racism the Vice President just referred to — the systemic racism that is a stain our nation’s soul; the knee on the neck of justice for Black Americans; the profound fear and trauma, the pain, the exhaustion that Black and brown Americans experience every single day. . . .

Let’s also be clear that such a verdict is also much too rare. For so many people, it seems like it took a unique and extraordinary convergence of factors: a brave young woman with a smartphone camera; a crowd that was traumatized — traumatized witnesses; a murder that lasts almost 10 minutes in broad daylight for, ultimately, the whole world to see; officers standing up and testifying against a fellow officer instead of just closing ranks, which should be commended; a jury who heard the evidence, carried out their civic duty in the midst of an extraordinary moment, under extraordinary pressure.

For so many, it feels like it took all of that for the judicial system to deliver a just — just basic accountability.

But somewhere in Obama’s vice president is the optimism that characterized the 2008 speech:

The battle for the soul of this nation has been a constant push and pull for more than 240 years — a tug of war between the American ideal that we’re all created equal and the harsh reality that racism has long torn us apart.

At our best, the American ideal wins out.

Can it always be the best and the worst of times?

March 5, 2021
Was America Founded A Roman Catholic Country? (with a Spanish accent)
Next Post 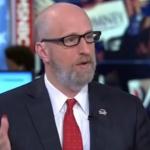 May 21, 2021 Is David French the Best Judge of America?
Recent Comments
0 | Leave a Comment
Browse Our Archives
Related posts from Putting the Protest in Protestant