The FBI came through, and it didn’t take them long to do it.

They have arrested a suspect in connection with the mail bombs that were sent to President Trump’s critics in the past week. The suspect has been identified as Cesar Sayoc, a 56-year-old Florida resident.

President Trump followed the arrest with a presidential-sounding statement, calling for national unity and applauding our quick-acting law enforcement. Earlier in the day, he had been referring to the “bomb stuff” as a “distraction” from the upcoming elections that might hurt the Rs.

I am glad that the FBI has a suspect in custody. I never doubted that they’d get to the bottom of this quickly. I’d like to just say positive things at this point, but I honestly think we need to take a moment and consider the quality of leadership we are following in this country.

Aside from President Trump and his on-going carny behavior, several pundits in our national media actually floated totally made-up stories that these mail bombs were a hoax. They did this without one shred of evidence. They just simply spun up a preposterous story and went on national news media and outright, flat-out lied.

This was done in the interests of partisan politics, which is being used as a conduit for the wealthy elite to take everything in this great nation for themselves. It was another installment in the on-going win-at-any-cost, the-country-be-damned attitude that has infected certain participants in our national debate.

Sadly, a number of witless right-wing loonies, including one prominent actor, passed on this story in their tweets and on their Facebook pages. Given the nature of what’s happening in this country, that’s like taking a bowl of anthrax into a crowd and tossing it in the air.

If you watch news media which aired nonsense like this, you might consider switching to another channel. Or, failing that, at least, consider turning off that specific commentator.

I am very glad that the FBI has done their job so well and apprehended a suspect in these mail bombs. They are impressive. I salute them for a job well done.

I am also happy to report that almost all legitimate news reporting was conducted professionally. I include much of the coverage from the channel whose pundits issued the scurrilous stories I referenced above.

In spite of the lying lizards in various places of power and prominence, this country still works. 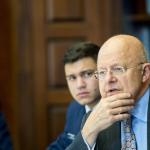 October 26, 2018
Jame Clapper Talks Moments after News of Mail Bomb Sent to Him
Next Post

October 27, 2018 The News in 10. Supremes Consider Hearing Case that Could Reverse Roe v Wade
Browse Our Archives
Follow Us!

George Will and the Millstone of...
Catholic and Enjoying It!
Related posts from Public Catholic