Trump re-scheduled his campaign kick-off rally in Tulsa, Ok from June 19 (Juneteenth) to June 20. He said in his statement that he was doing this because June 19 is “evidently a big deal.”

I don’t know how this came down. But I do know that African American friends of mine who are leaders in their community were irate about this rally.

I would guess that our governor did not get very many black votes in his bid for election. But he must be smart enough to realize that he was dealing with a low turnout from that community. If black people actually went out and voted, they could break the back of his support in Oklahoma’s two largest counties — not to mention Eastern Oklahoma as a whole — and that could easily be a game changer.

I don’t know if his office communicated any of this to President Trump. Oklahoma is, after all, Trump Land. Those of us who are in outspoken opposition to President Trump can be lonely little islands. This is especially true of white, deeply religious, pro life Baby Boomers like me.

I can tell you, based on entirely unscientific observations of Okies I personally know, that Oklahoma Trump fanatics fall mostly into two groups. He has a lock on white religious baby boomers here in Oklahoma. He’s also got a strong following among white never-go-to-Church angry poor folk.

In these past weeks, I’ve seen quite a few of the more thoughtful black commentators make the point that poor white people are just as much on the bottom of the wheel as poor black folk. They are right about this.

I don’t have the knowledge to judge by degree, but I can tell you that, based on 18 years representing a rainbow district with more than a few poor black folk, poor white folk and hispanics, that is true. The little white kids coming up from poor neighborhoods are just as much prey with no future and no hope as those of any other color.

In some ways, they are the worst off of the lot. They don’t have the cultural identity of being black or hispanic to hold them up. White churches avoid the hood. They “minister” to the people there in a sporadic fashion, but they don’t make any attempt deal with them as equal human beings.

Black preachers, on the other hand, stand on the Sermon on the Mount and reach out into their communities with the hand of Christ. If you want to hear the Gospel preached to power, go to a black church.

Poor white kids don’t have white preachers to teach them their dignity the way the black preachers do with black kids. They don’t have families and faith the way the hispanic kids do. You won’t see them at anybody’s church, because nobody is going to invite them. They really are kids that our society has thrown away.

The irony is that many of the adults in their lives are booze-swilling, drug-snorting, gun-toting Trump supporters. These people don’t vote often, and when they do vote it’s going to be personal. They’re voting for Trump because he says things that seem to speak to their condition in simplistic terms of hate.

I know from personal experience that a politician can talk to them about complicated issues and they will follow. I also know that you can appeal to their better nature and they will respond with loyalty and trust.

But Trump never appealed to anybody’s better nature. I doubt if he ever had a genuine I-thou conversation with anyone in his life. He always aims for the atavistic underbelly of human emotion where tribal loyalties and kill or be killed are the ruling forces that run things.

The Okies he’s hooked with this hate rhetoric are aging Baby Boomers who are beginning to understand that they are next off on the mortality train, and angry, deprived white folk who’ve been dumped on and disregarded by both political parties to the point that it’s destroyed their lives.

What he doesn’t have is the black folk, most of the hispanics, young people, and a disorganized but large number of women from every demographic who have had it with male politicians and religious leaders who think rape is just boys being boys. If the Oklahoma electorate was people of color and self-respecting women, he couldn’t get enough votes to get himself elected Mayor of Slapout.

Trump says that he’s gotten 200,000 requests for tickets for his event in Tulsa. That seems feasible. He has a lock on a lot of people here. Also, Tulsa is situated to draw people from Kansas, Missouri and Arkansas, as well as Oklahoma.

However, since Trump always lies, and brags, I’ll reserve judgement. I’ll just say that I would be surprised if he didn’t fill that stadium to overflowing. I also expect that the crowd will do the Two Minute Hate with as much venom as any crowd Trump has ever led in chant. They’ll chant hatred for somebody of Trump’s choosing with all their little hearts. They’ll boo and stomp and yell out and applaud.

If you were there, you’d think you were at the main event at Saturday Night Wrestling instead of a presidential speech.

But I guess that’s what Trump’s supporters want. 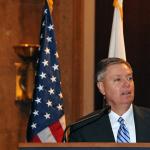 June 13, 2020 Sen Lindsey Graham Before Trump. What a Diff Selling Out Makes.
Browse Our Archives
get the latest from
Public Catholic
Sign up for our newsletter
POPULAR AT PATHEOS Catholic
1