Tucker Carlson may have once had a mind. He may once have been a good person.

But all of him that he’s been showing lately is a rage-filled nut-job of a man. His latest attack on Senator Tammy Duckworth is so stupid that it would be funny if the influence Carlson has because of his job didn’t put it in another, darker category.

For those of you who don’t know, Senator Duckworth is an American hero. She was born in Bangkok, Thailand, to Lamai Sompornpairin and Franklin Duckworth. Her father was a veteran of the US Army and the US Marine Corps who served in World War II and Vietnam, and  who traced his American roots to the Revolutionary War.

Senator Duckworth was an Army helicopter pilot in the war in Iraq. She was severely injured when her Blackhawk helicopter was shot down during combat. Her injuries cost her both legs and left her with a partially crippled arm. She is confined to a wheelchair.

During an interview, Senator Duckworth said that we need to have a national dialogue about the whole subject of taking down monuments, that those who objected to the monuments had a viewpoint that should be heard. This set off Tucker Carlson’s insane side.

If he disagreed with her, all he had to do was say he disagreed and give his reasons. He could have done this vehemently. Extensively. Persuasively. He had both a platform for doing it and a sympathetic audience in front of him.

But that’s not what he did. Instead of taking a position and defending it like a normal person, Tucker Carlson just upended his verbal trash can and emptied every one of the right-wing’s standard insults onto Senator Duckworth. Given who he was attacking and what he said, these insults are such an obvious mashup of inapplicable lies that they make Tucker look like a looney.

He said (among many ugly things) that people who were born in this country (meaning, I suppose, Tucker himself, since we’ve already mentioned that Senator Duckworth was born overseas to an American father and a Thai mother.) and who loved America and wanted to fight for it …

I’m going to stop here and digest this opening salvo. Tucker Carlson never “fought” for this country, unless, of course, you count running his mouth and getting paid a lot of money for doing it. Why in the name of all that’s true and honest, would he imply that Senator Duckworth, who is war hero, did not “fight” for America? That’s not just a lie. It’s a ridiculous lie.

The only explanation I can think of is that the right wing has taken on the habit of demeaning the service of those who actually do fight for this country. From Senator John McCain, to Lieutenant Colonel Alexander Vindman, to Senator Tammy Duckworth, they have consistently demeaned the service of American heroes.

I guess Carlson hadn’t made a big enough fool of himself the first time, so the next night he dished up another steaming plate of senseless hate for his appreciative viewers. This time he really piled it on. The truth according to Tucker is that Senator Duckworth is a “coward,” “a deeply silly and unimpressive person,” (which is standard misogynist fare, akin to calling a black United States Senator a boy) who “hates America.”

Senator Duckworth’s response was as simple as it was to the point. “Walk a mile on my legs,” she said, “and then tell me whether or not I love America.”

This whole episode is just another example of how the extreme right wing has drug the once proud Republican Party and the United States of America into a pit of sludge. It wasn’t very long ago that the Republicans prided themselves on their patriotism. They respected America’s servicemen and women. They didn’t attack them and demean their service.

But those times are over.

People who behave like Tucker Carlson did are a big part of why they are over. Behavior like this attack on Senator Duckworth probably rolls the ratings. He may lose a few sponsors for a while, but they’ll be back. Because he has the numbers.

But there comes a point when anyone who is halfway responsible and caring has to ask himself about the cost of what he’s doing. What are Tucker Carlson and his fellow commentators doing to this country?

They are, by their actions, lowering the level of discussion of serious issues to that of a pie throwing contest. We don’t need Jerry Springer anymore. We don’t need Saturday Night Wrestling. We’ve got them.

If Tucker Carlson really does love this country, he needs to cool his jets and conduct his job responsibly and with ordinary thoughtfulness and civility. He needs to do his best to start telling the truth, all the time. When he gets something wrong, he needs to correct his error as soon as he can. Most importantly, he needs to treat other people with respect, even when he doesn’t agree with them.

Demonizing, name-calling, demagoguing are not discussion. They are not debate. They are, always, lying for some sort of personal gain.

Behavior like what Tucker Carlson demonstrated in his attack on Senator Tammy Duckworth is damaging this country. It is also destroying whatever personal morality Tucker Carlson might have.

You can get angry and do something like this once, then repent and not do it again without it destroying your character. But if you do it every night, it will turn you into a monster. You become the things you do.

Both sexual pornography and hate pornography like what these commentators are selling are obsessions. Both of them destroy your proper respect for other human beings.

ILLINOIS SENATOR Ladda Tammy Duckworth owns a great pair of legs. They’re painstakingly painted by an artist to match the skin tone of her arm—right down to the freckles—and the second toe on one foot is longer than the first, just like her own used to be. But Duckworth can’t stand them. “When I see myself wearing those legs in a mirror, I see loss. But when I see this”—she gestures toward the steel-and-titanium prosthesis attached to her thigh above her right knee—“I see strength. I see a reminder of where I am now.” Same thing with her wheelchair. “People always want me to hide it in pictures. I say no! I earned this wheelchair. It’s no different from a medal I wear on my chest. Why would I hide it?”

She is sitting in the chair, a souped-up Segway that she received from a veterans’ group, in a small office close to the floor of the U.S. Senate. Looped over its back is a bag with her breast pump. On the table in front of her is her daily schedule prepared by staffers. It is filled with meetings having to do with issues in her home state, a few Senate votes, and then, discreetly tucked in at four-hour intervals, a series of asterisks. Time to pump milk for her baby.

There are so many firsts attached to Tammy Duckworth—she’s the Senate’s first member to give birth while in office, its first member born in Thailand (to an American father and a Thai mother of Chinese descent), and, of course, its first female amputee. It’s that last distinction that tends to overwhelm all the others. As a wounded veteran with a Purple Heart, she has introduced or cosponsored bills protecting the rights of veterans—and she’s been fearless in confronting the president over military and foreign affairs. Last January, when President Trump accused the Democrats of holding the military hostage over immigration, it was Duckworth who took to the Senate floor, declaring in a now-historic speech, “I will not be lectured about what our military needs by a five-deferment draft dodger.”

When I started to ask Duckworth a question about the accident that took her legs, she quickly corrected me. “It wasn’t an accident; those suckers were trying to kill me.”

July 8, 2020
There is No Jesus and No Salvation in the False Political Gospel Being Preached Today.
Next Post

July 9, 2020 When Did Republicans Start Hating America's Servicemen and Women?
Browse Our Archives
get the latest from
Public Catholic
Sign up for our newsletter
POPULAR AT PATHEOS Catholic
1

Your Choice: The Eucharist or the...
On the Catholic Beat
Related posts from Public Catholic 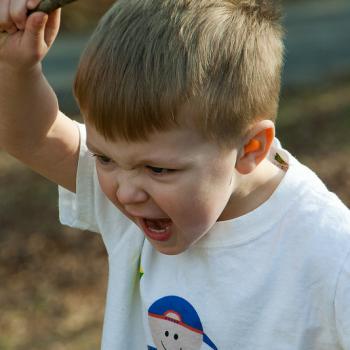 Catholic
Trump Says if He is Re-Elected He will...
Public Catholic

A Holiday Horror Flick Where the Monster Is...
(...sort of.) I'm at First Things: Last year, Oscar-winner Parasite and box-office...
view all Catholic blogs
Copyright 2008-2020, Patheos. All rights reserved.