UPDATE: Trump Adds Unborn to his “List of Priorities.”

The Republican Party did away with its platform this year. Instead of a platform that details the principles on which the party stands, it simply pledged loyalty to Donald Trump.

Trump, on his own and with no vote from the party faithful, decided to do away with a party platform that had been voted on by members of the Republican Party from the precinct level up. Instead, he wrote out a “List of Priorities,” and told the RNC to approve it.

The RNC handed the party over to him. They obediently deep-sixed their platform and pledged loyalty to Trump.

One small wrinkle was that Trump left any mention of abortion out of his “list of priorities.” I guess that the resulting press comments alerted the stable genius that he needed to make a change to protect the campaign slogan that he is the “most pro life president in history.”

So, a week after the convention and with no input from the RNC, he added language about “unborn life” to his “list.” He did not mention any other pro life concerns. His only addition was about the unborn.

I agree that unborn life should be a priority. But anyone with half a brain can see that Trump has become the Republican Party’s absolute ruler. The party, as a true political party, no longer exists.

The Republican Party as a network of like-minded Americans working for commons goals is dead. What we have masquerading as the Republican Party is a corrupt, nasty cult that is under the thumb of a ruthless demagogue. The gloss about pro life is just that: A gloss.

For all their vicious rhetoric and hate-filled invective, the Republican Party under Trump has not saved the life one baby. What they have done instead is turn the pro life movement into a movement that supports corruption, sexual assault, racism, vigilante violence, treasonous collusion with hostile foreign powers and misogyny.

They have used the noble fight for the sanctity of human life as a Judas Goat to justify all their other sins.

I know that being presented with the terrible reality that this situation so obviously portrays will only anger those who are besotted with Trump. Their persistent reaction to every vile thing he has ever done is to deny that he did it and attack the person who tells them.

That places the whole burden for saving America on the rest of us. Those of us who have eyes that see, ears that hear and brains that think need to get past the temptation to waste time trying to reason with Trump worshippers. They have shut their eyes and stopped their ears. They will not face reality until reality knocks them flat.

We’ve got serious work to do. We have to save America from the same fate as the Republican Party.

This election isn’t about political parties and issues. It’s about whether or not we will allow Trump to do to the Constitution what he has done to the Republican Party platform.

Those of us who understand what he is are the last line of defense in this great fight to save our democracy. 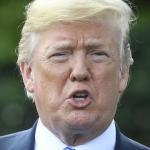 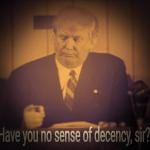 September 4, 2020 Atlantic: Trump said Dead American Soldiers are "Suckers and Losers." Gen Eaton Replies.
Browse Our Archives
get the latest from
Public Catholic
Sign up for our newsletter
POPULAR AT PATHEOS Catholic
1

St. Philumenos And The Challenge To Follow Christ
The martyr, St. Philumenos, was a bread merchant by occupation, and a...
view all Catholic blogs
Copyright 2008-2020, Patheos. All rights reserved.