You Don’t Have to Support Religious Demagogues. You can say No.

You Don’t Have to Support Religious Demagogues. You can say No. September 10, 2020 Rebecca Hamilton

A few years after my knock-me-flat-in-the-middle-of-the-road religious conversion, and many years before I entered the Catholic Church, my husband and I were church hunting.

Hubby got the idea that we should look at a big ole rompin’ stompin’ charismatic church that is not too far from where we now live. So, one fine Sunday, we left the kids with my Mama and gave it a go.

My grandmother had been a Pentecostal Holiness preacher, so I kind of knew what happened in charismatic church services. My husband did not. But neither of us expected the religious horn-swaggling we were about to witness that day.

Except for liturgical churches like the Episcopalians, most Protestant services don’t have the extensive Scripture readings that the Catholic mass does. The “text” for the sermon of the day is often just one verse, and the choice of that verse is whatever hits the preacher’s fancy.

If a Protestant preacher wants to preach on the verse, “My brother Esau is a hairy man, while I am a smooth man,” that’s their call. The “text” and topics of sermons are whatever fits the preacher’s purposes on that given day.

On this given day, this particular Protestant preacher had decided to let loose on one of the fave texts of misogynists everywhere, which is to say either the verses in Ephesians or I Corinthians where St Paul tells wives to “be subject” to their husbands. I don’t remember which of these two verses this particular preacher chose for his text.

All I know is that St Paul wrote some of the most wonderful things that have enriched the faith for two thousand years. But in the midst of these soaring sentences of love and faith, he dropped a few bombs that have been used by haters to exempt themselves from every good thing he ever exhorted them to do, as well as the Gospels themselves.

There are a couple of verses in St Paul’s letters that people who want to bully and abuse other people pull out and use as weapons to nullify the Gospels and everything that Jesus said. These verses have been used to deify the satanic abuse of women and homosexuals throughout the history of Christianity. They are quoted as the justification for discrimination, hazing, bullying, battering, baiting and even murder.

I don’t think for one minute that St Paul foresaw that what he wrote would be used to justify and empower evil. After all, he also wrote “There is neither Greek nor Jew, slave nor free, male nor female, for all are one in Christ Jesus.”

But there it is. These few verses have been used to justify centuries of sinful mistreatment of over half the human race. They are used that way today.

The truth is that Scripture can be used to empower and ennoble all people, including women. Or, it can be used to diminish, control and dehumanize them. It depends on whether it is preached as the leaven that brings the Kingdom, or as the club that enforces hell on earth.

To their everlasting shame, male preachers and clergy have spent 2,000 years using Scripture as a weapon against the female half of the human race. They especially love to use a couple of verses St Paul wrote. They use these verses to deny women’s full humanity and to justify every sort of double standard and discrimination against them. They bully women into accepting this by telling them they will go to hell if they don’t “submit.”

This particular preacher we heard that day was one of the Scripture-justifies-misogyny crowd. He got started and proceeded to wind himself up into a true blue shouting performance. My husband, who had attended gentler churches when he was a boy, was put off by the phoniness of this, by the obvious fact that the preacher was performing and doing a routine.

“I don’t like it when the preacher puts on an act,” he told me later.

I don’t know how this church service ended up. We sat there and listened to the misogyny for a while, then I said, “That’s it. I’m leaving.” Hubs and I got up and walked out.

My husband was more than a little amused by how angry I was. He entertained the kids for months afterwards with stories about how their Mama walked out of that church in a flaming wrath. Each telling got more colorful and comical. “Let me see if I can throw this chair and hit that fool in the head,” he’d say in the high squeaky voice he uses when he imitates me.

The kids and my family would rock with laughter. My Daddy in particular loved to hear these stories. My Mama was not so amused. She basically thought that someone should have hit this fool preacher on the head with something, maybe common sense and decency.

In all the years I’ve been Catholic, I’ve only heard one homily that said anything about women that I found truly offensive. It was a single remark from a fill-in priest in support of the sexual double standard.

If he had said more, I would have been outa there. The only reason I stayed was because it was over so fast. I didn’t leave, but I remember. I avoid that priest. I will never take his advice about anything. If he or someone like him is appointed pastor to our parish where I have been happy for over 20 years, I will leave the parish.

That leads me to the point of this post. The laity does not have to take crap from their priests and bishops. We owe them gratitude for the way they extend themselves for us. We owe them our support in their work and respect for their kindness. We owe them an honest acknowledgement that almost all of them are good guys who try hard.

But every silver lining has its cloud. If your priest is standing up at the front of the church preaching hate, you not only have a right to walk out, you pretty much have a responsibility to walk out.

Father James Altman has been blowing and going in his Wisconsin parish, blasting the faithful with political hate that is lifted straight off the back pages of the worst of the extreme right wing web sites. He’s the king of demonizing and calling down judgement on people from the pulpit. He’s a vicious racist who denies the existence of racism and does not stop at belittling barbaric violence such as lynching.

But what of his followers?

What of the people who download his YouTube videos and post them on their Facebook pages with comments such as “God bless this holy priest,” or “Thank God for this brave priest,” or some other endorsement of his hate-filled ranting?

The power of a demagogue comes from his followers. People who deliberately push the hateful message of clergy who preach racism, misogyny and discrimination  share in the guilt of their religious leaders.

When a preacher or priest preaches hate, you can walk out. If you post their garbage on your FB page with holy attaboys and say you agree with and support their hate, you are making yourself their co-conspirator in sin.

You become culpable precisely because you are a free agent. You have a choice.

You can call foul.

God gave you a brain and free will. He must have intended for you to use them. 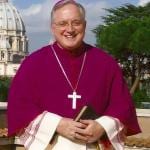 September 11, 2020 If You're Terrified Trump Will Win this Election, You Should Pray.
Browse Our Archives
get the latest from
Public Catholic
Sign up for our newsletter
POPULAR AT PATHEOS Catholic
1

Things Keeping Us Going: Vaccinated Edition
I got my second shot on Saturday morning at Gillette Stadium, where...
view all Catholic blogs
Copyright 2008-2021, Patheos. All rights reserved.
error: Content is protected !!