Sen Lankford Apologizes for His Racism. Fails to Acknowledge He Supported Sedition.

Republican Senator James Lankford of Oklahoma has apologized to his black constituents for his attempt to overturn the November presidential election and install Donald Trump as a de facto dictator.

Senator Lankford has said that he “didn’t realize” the racism inherent in the actions he and his fellow seditionist senators took by objecting to the electoral votes that pinpoint the states whose elections were decided by a massive turnout of black voters.

Presumably, the senator is unaware of the decades-long, coordinated and egregious program of voter suppression aimed at minorities by his own Republican Party. He must not have been aware of the many attempts to reduce the ability of people of color to vote by legislating onerous restrictions which people who do shift work in insecure jobs and who have limited funds find difficult to manage. He must not have known of the closing of polling places in black areas and the attempts to destroy the United States Postal Service to keep people from voting by mail during a worldwide pandemic. This is the same pandemic that, due to Republican lies about basic scientific facts such as the germ theory and incompetent Republican governance, has killed almost 400,000 Americans in 10 months.

I am a bit incredulous that the black citizens of Oklahoma somehow or other managed to get through what must be a lead wall of unknowing and convince Senator Lankford that his plan to overturn the votes of black people in the November election was racist.

He says he was blind. I’ve been blind about things myself in my life. So, I’m going to do my best to believe him. But if he means it, there have to be some meaningful changes in his behavior.

He’s got to stop backing voter suppression in all its guises, for a start.

He also needs to have his awareness raised quite a bit further than just realizing that trying to cancel out the votes of tens of millions of black Americans is racist. Somebody needs to tell him that trying to overturn a presidential election and install a psychopath as dictator is sedition.

Senator Lankford was on the mike, making a speech in favor of overturning the election so that Trump could be dictator when the insurrectionists breached the barricades and broke into the capitol. He literally had to stop in the middle of his seditious act, put down his mike and run for his life to get away from the insurrectionists he had been in the act of supporting and inflaming.

Senator Lankford had quite a lot of warning that this sort of thing could happen. Just a few months before he decided to help overturn the presidential election, Trump’s insurrectionists took over a legislative session in Michigan and shut it down. A plot to kidnap, rape and murder the Michigan governor was subsequently stopped by the FBI and Michigan law enforcement.

Trump insurrectionists also planned to murder Michigan police officers and their families and to kidnap and murder the Democratic governor of Virginia.

President Trump’s reaction to this outrage was to mock the Michigan governor and attack her repeatedly at his rallies, spurring the crowd to chant “lock her up” and other vile things about her.

Senator Lankford’s non-response to this was to keep on supporting Trump. He had a clear opportunity to remove Trump from power for trying to use American foreign aid to coerce a foreign power to interfere in our election on his own behalf. Instead of voting to remove Trump, a vote that would have spared us what was to follow, Lankford bowed to Trump.

It wasn’t until he had to duck and cover himself that Senator Lankford backed off and voted against the effort to overturn the November election and install Trump as a dictator. I really think that if the insurrectionists had stormed some other building in Washington than the one in which Lankford’s precious self was standing, he would not have cared. I think he would have dismissed it the same way he dismissed the attempts to murder the Michigan and Virginia governors and gone right on with his motion to overturn the electoral vote in a state that voted against Trump. Let me repeat this: Lankford was speaking on behalf of destroying our democracy when he was interrupted by the insurrectionists, storming the Capitol Building in which he stood.

So, while I am glad that Lankford has apologized to his black constituents, I am not exactly melting down with belief in his sincerity. He nearly got killed himself. That was what it took to move him. He might also have a political motivation.

It is a fact that no one can win a statewide race in Oklahoma if Tulsa and Oklahoma counties go against them by a significant margin.

It is a fact that eastern Oklahoma has whole towns that are black.

It is a fact that a gi-normous majority of the Republican bedrock voters in wealthy areas of Tulsa and Oklahoma counties are pro choice, but they have been voting Republican because they never believed the party would actually overturn Roe v Wade.

It is a fact that if the 6 to 3 pro life majority on the Supreme Court does what it was put there to do and overturns Roe v Wade, the political dynamics of the debate on that issue are going to change dramatically.

It is a fact that Tulsa and Oklahoma counties have a large black population.

It is a fact that only a tiny percentage of Oklahoma’s eligible black voters actually turn out to vote.

It is a fact that Stacy Abrams flipped Georgia.

It is a fact that corporations have been backing away from giving money to Republicans because of the insurrection.

It is a fact that Republicans beam their candidates into office on beams of corporate money.

It is a fact that James Lankford must stand for re-election in 2022.

Do the math, cowpokes. With the right Democratic candidate and a lot of work, Lankford’s completely “safe” red-state senate seat could flip.

I’m not saying that this is why the senator apologized to his black constituents. I’m hoping he really was as bat-blind as he claims, and that he’s had an awakening of conscience.

But if that is true, he’s just getting started with his apologies.

James Lankford and the rest of his Republican thug cronies tried to destroy America. It is an open question if Biden will be able to lead us out of the ugly morass they have created, especially since so many of them are continuing right on with their lies and incitement and they are being buttressed in this by the entire right wing media machine.

If Senator Lankford is sincerely sorry for trying to destroy our democracy so Donald Trump could become dictator, he needs to apologize to everyone. He owes a big mea culpa to every single American for his seditious actions.

More than that, he owes us the truth.

He must stop repeating Republican lies.

It’s wrong to lie the way the Republican Party lies. Lankford was once a preacher. He knows lying is wrong.

Then, when the time comes, if he’s sincerely sorry for what he’s done, he has to vote to convict Trump of the charges for which he has been impeached.

Senator Lankford has done enormous damage to this country. He’s betrayed his oath of office. He has betrayed his witness for Christ.

He’s got a lot of water to swim back across to get home again. I know from personal experience that it ain’t easy to swim one of those public confession-and-change-of-heart swims.

But it’s what he’s got to do. It comes with the territory. He’s a United States Senator. To those whom much is given, much is required.

From the Tulsa World:

U.S. Sen. James Lankford apologized to Black Tulsans on Thursday for not recognizing that his involvement in questioning presidential election results would offend them.

In a letter addressed to “My friends in North Tulsa,” Lankford acknowledges that his actions “caused a firestorm of suspicion among many of my friends, particularly in Black communities around the state. I was completely blindsided, but I also found a blind spot.”

… “What I did not realize was all of the national conversation about states like Georgia, Pennsylvania, and Michigan, was seen as casting doubt on the validity of votes coming out of predominantly Black communities like Atlanta, Philadelphia, and Detroit,” he wrote.” 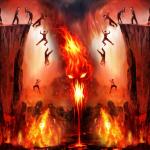 January 12, 2021
What If Someone You Love is Trapped in the Trump Cult?
Next Post

January 16, 2021 Okies, Our All-Republican Congressional Delegation is a Bunch of Lying, Seditious Scum
Browse Our Archives
get the latest updates from
Public Catholic
and the Patheos
Catholic
Channel
POPULAR AT PATHEOS Catholic
1