GQP Whore Bishop Alert: What’s Happening to Disney Can Happen to You.

If I had served God as diligently as I have done the king, He would not have given me over in my grey hairs.

Cardinal Woolsey, Archbishop of York and Lord Chancellor of England under Henry VIII.

The Disney/DeSantis/GQP fight going on in Florida is a cautionary tale to right wing Catholic bishops who have sold their souls to the Republican Party.

Here’s how that story goes.

When you sell out to the GQP, they open the public till for you. Suddenly, the Church gets access to tons of taxpayer money to be spent however your corrupt little heart desires. Thus, you can tell yourself — as you probably do — that this “access” allows you to do good, that you are only supporting the party that is “pro life” against the heathens at the gate, and that besides, you are strengthening Christ’s own Church.

You’ve given yourself the gift of guilt free corruption. And since you also tell anyone who disagrees with you that you speak for God … well … who’s gonna argue?

Not only that, but the GQP puts you in shiny new positions in right wing think tanks and foundations. Suddenly, you are the resident “adviser” on things moral to a decidedly amoral enterprise that claims a singular and overarching moral imprimatur for itself and uses you as proof that this is so.

In exchange for the luster of your pointy-hatted self on their board or advisory committee or whatever position they gift you with, you get free trips to great resorts, gourmet dinners, and personal stroking to the tune of both largesse and access. The billionaires who fund the foundation/think tank are your new best buds. They love you to pieces, and give you all the patting and puffing that even you, with your decades of being sucked up to by the guileless faithful, can swallow.

And you tell yourself that you are doing good. You are making the Church stronger. You are building great ministries with right wing money. You are just the best person who ever lived.

Of course, it is expected that you will turn a blind eye to the excesses, cruelty and anti-Christ behavior of GQP politicians. You will be required to accept whatever these politicians do, however much it reeks of treason and corruption, because they vote for “pro life” legislation and help pack the Supreme Court with pro life judges.

“Pro life” is the excuse for any excess, any cruelty, any number of deaths, theft, lies, racism, misogyny or sexual perversion. The GQP is, de facto, “pro life” even though most of their policies except the single thing of their willingness to vote for any legislation that opposes legal abortion are both corrupt and anti-Christ. All they have to do is what they are told on this one issue in the most narrow and, in actual practice, death dealing way, and they are “pro life.”

That gives them an excuse.

And, Mr Bishop, it gives you an excuse, too.

You can tell yourself and all your followers that all there is to following Jesus is living in servitude to the GQP and make both of you believe it.

But you can’t make it so.

You are following a false god. You have gone whoring after easy money and the idol of political salvation. Satan offered you the kingdom of this world if you would fall down and worship him, and you dropped to your knees. You also told your followers to get on their knees in front of him, as well.

So what does the big rollback of incentives that Florida Republicans gave to Disney have to do with you?

So long as you stay bought and follow the GQP instead of Christ right straight into hell, it has nothing at all to do with you. You sold yourself to a bunch of billionaire fascists and their political puppets. If you keep on keeping on working as their bishop instead of Jesus’ bishop, they’ll keep on paying you like a slot machine.

Over time, that full-body lick job they gave you at the beginning may get a little less fulsome. They may start, in subtle ways, to remind you that you are their whore and not their equal. But, at least at first, it will be subtle. And since you’ve become so good at lying to yourself about yourself, you can let it pass and cash the check.

But if the day ever comes when you find yourself looking at your self with that gut-wrenching recognition of what you are and what you’ve done; if, in short, you ever have a Nathan and David moment, you’d better buckle your seatbelt. Because what is happening to Disney will look like an ice cream Sunday compared to what will happen to you.

All those taxpayer handouts you’ve used to build your ministries can be taken away a lot more easily than Disney’s special deals. After all, Disney is big business, a major employer and a beloved enterprise. They have clout.

You aren’t and you don’t.

The only people who follow you are GQP nut jobs who are the same kind of faux political “christian” that you have been. They will turn on you if the GQP turns on you. Everybody else will have recognized you for what you are a long time ago.

Chances are that you also have personal weaknesses and sins; things that you don’t want “revealed” in right wing media, by right wing bloggers, and, of course, in right wing Catholic publications, television stations, and YouTube channels. Do not think that your buds who gave you $$ and put you on their boards and flattered you senseless will stick with you. They can turn like someone flipping a switch. And nobody — nobody — can or will speak up for you.

Nobody respects their whore. And these people don’t respect you.

They are using you to put a gloss on their evil in order to gain power for themselves. They can dump the “pro life” position anytime it becomes a problem for them. They can dump you even easier than that, since nobody cares about you all that much anyway.

That’s why the DeSantis/Disney/GQP fight matters to you. It’s a public demonstration of how little respect the GQP has for the institutions and people it buys. When they buy you, they expect you to stay in line and back them, whatever they do.

For a Catholic bishop, that means you have to put them ahead of the Gospel. You have to preach things that are flat-out anti-Christ.

It means, among other things, that you have to drop-kick your blather about a “preferential option for the poor” straight off your plate. It’s ok if you claim that you have a preferential option for the poor. The people who own you now are all about lying. You can lie and be a hypocrite all you want. But you’d better understand that the GQP is owned by billionaires who made their mammon by decades-long economic rape of the American people, and they are paying you to enable this rape by calling it moral.

This goes for just about every bit of Catholic teaching, including pro life itself. It’s ok, in fact it’s to their advantage, for you to be all in about making abortion illegal. But you’d better stop there. Don’t you ever put your politics behind doing anything that would actually make it easy for women to chose life for their babies.

You can say you’re “pro family.” In fact, it’s required that you do. But don’t even think about supporting changes in the tax laws or developing programs that actually help families.

This hypocrisy is ez pz if you’re a big enough liar and dissembler. All you have to do is go through each and every piece of legislation you’re supposed to oppose until you find something in it that you can say violates Catholic teaching. That gives you the excuse to oppose it, and obey your master.

As I said, it’s all cool if God gives you over to your sins and you ride along on the gravy train until you die. But if the Lord loves you enough, He might give you a Nathan-David moment. He might bring you face to face with what you’ve become.

If you actually do come to Jesus and try to change, you will pay. The least of it will be the wreckage when the GQP largesse is suddenly withdrawn and your old pals attack your ministries and all the good you thought you were doing crumbles into dust. That would be the easy payday, with no interest charges. It can get a lot uglier than that.

That’s the real story of you, Mr GQP Bishop and what you’ve done. The Disney/DeSantis/GQP fight is a war writ large between people who can actually hurt one another.

Disney is not helpless.

You, if you ever decide to convert to being a Christian again, will be. 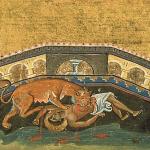 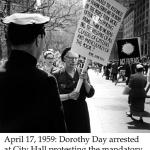 April 22, 2022 Dorothy Day was Woke. You should be woke too.
Browse Our Archives
Related posts from Public Catholic