Who belongs in the manger? Who belongs on the cross? Jesus? Or, a Jesus-substitute? Does a Jesus-Substitute commit blasphemy?

Christian iconography and art collapses the historical Jesus into the artist’s context. Hermeneutically, this is the principle of application or applicatio. The saving work of Jesus Christ is pro me, for me, Martin Luther emphasized (Stjerna). Because nobody took a video or photograph of the historical Jesus, every artistic depiction includes a constructive interpretation by the artist. The critical postmodern interpreter of such art might ask: “Mmmmm? Whose power interests are being served here?” (Crucifixion by Francis Mampuya Kito, Congo,  1997). When can we discern blasphemy?

In a Patheos post, Berry Duke reports on a controversy at the Catholic University of America. Like hand grenades, two paintings have exploded into spiritual chaos. A chapter of the Young Americans for Freedom has judged these paintings to be “blasphemous.” One student complains, “it’s just another symptom of the liberalization and secularization of our campus.” 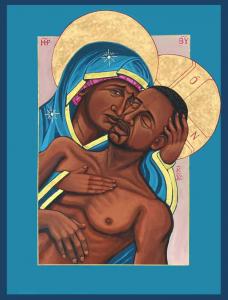 The two identical paintings by Kelly Latimore take the form of an icon. Whose head is resting in the arms of the Holy Virgin mother? Not Jesus. No, it’s George Floyd. Floyd, you may recall, was a black man murdered by a white Minneapolis police officer on May 25, 2020. Reaction by Black Lives Matter prompted a worldwide outcry against racial injustice. (Icon by Kelly Latimore). Here is how CUA’s president John Garvey interprets the icon.

The icon “Mama” is a pieta depicting Mary and her Son, Jesus Christ. The letters in the halo are Ὁ ὬΝ, which is shorthand in Greek for “I Am.” The letters are used in icons only in connection with Jesus Christ, the Son of God.

There are those who would like to see George Floyd as the male figure in the icon. That is not how we read it. The image represents to our community a good-faith attempt to include religious imagery on campus that reflects the universality of the Catholic Church.

It seems to me that three coherent answers obtain: (1)  blasphemy outrage; (2) symbol theft; or (3) critical postmodern analysis. Symbol theft may be an actual theft in order to steal sacred power on behalf of an ideology. Yet, at a very subtle level, it might instead illustrate the Theology of the Cross. It might make applicatio (application) of the saving power of the cross to a specific context.

Theology of the Cross

God reveals himself, but only paradoxically as revealed in the cross: God’s wisdom is granted to foolishness, his power in weakness, his glory in lowliness, and his life in the death of his Son. (Mattes, 2017, p.735)

In Jurgen Moltmann’s augmentation of the Theology of the Cross, Jesus Christ is present with those of us who suffer by suffering with us.

This means that we the interpreters must exert some effort to distinguish outright symbol stealing from authentic applicatio.

Let me elaborate while commenting on another example.

In 1984 Edwina Sandys’ Christa Crucifix was placed in St. John the Divine Cathedral in New York City. As you can see, instead of Jesus on the cross we see a nude nameless woman. 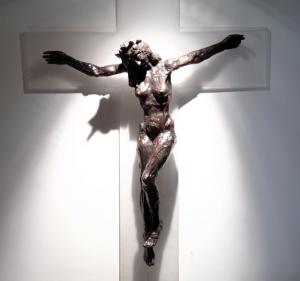 How should we interpret this?

First, blaephemous outrage. One who responds with outrage over blasphemy, would expect Jesus and not a Jesus substitute on the cross. Suffragan Bishop of New York Walter Dennis criticized the sculpture. It is “theologically and historically indefensible,” he said. The good bishop assumes that Jesus and only Jesus should be pictured in such an icon or artistic rendering. Christa was quickly removed but then returned in 2016.

Second, Symbol Theft. Is artist Edwina Sandys making application of the saving work of Jesus Christ for women in her context? Or, is she stealing symbolic power in order to empower a feminist ideology?

The cross of Jesus Christ possesses and exudes sacred power that others might covet.  Sandys wanted a transfer of this power. “I wanted to portray the sufferings of women,” said Edwina Sandys. By stealing the symbol of the divine from the Christian tradition, Sandys could muster that power on behalf of her particular cause.

“Most women of my generation have been stamped with the idea of Man’s superiority over Woman, which is hard to throw off without seeming aggressive. I hope that ‘Christa’ continues to reveal the journey of suffering that we all have in common.”

Third, Critical or Postmodern Deconstruction. The critical postmodernist would immediately observe that classical icons or traditional art depicting the historical Jesus are already overlaid with ideology. An unconscious ideology, to be sure; but ideology all the same. The simple fact that we inherit a tradition in which the Child of God is male testifies to the cultural assumption that the male gender is closer to God than other genders. The only difference in the case of Christa is the conscious or deliberate reference to the plight of women who suffer. By shocking our traditional sensibilities, artist Sandys is waking us up to past injustice. We get woke. By stealing the power of the Christian symbol Sandys is empowering women. 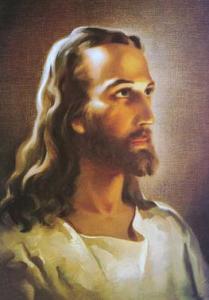 Here is Jesus Christ in devotional art painted by Warner Sallman in 1940.  My all male seminary classmates in the 1960s referred to this painting as the “bearded lady.” Unkind. What was behind their unkikndness?

A critical postmodernist would aver that no artist today has access to what the historical Jesus looked like. This means that every artistic rendering is a construction. In this case, Jesus looks like the All-American boy with a beard. Actually, Jesus looks Anglo-Saxon, the dominant racial and ethnic segment of a pluralistic American society. Without acknowledging it, Sallman’s rendering offers divine blessing to Teutonic genes. 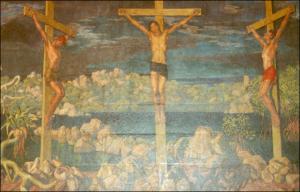 Let’s go to Kandy, Sri Lanka. Here is the reredos mosaic behind the altar of a church I visited. I took this photo at night in this outdoor worship area. Unfortunately, my flash obscures some details.

Note how Jesus and the two thieves look like ethnic Sinhala people. The rocks and terrain are typical of this region of Sri Lanka. Symbol theft? Or, the principle of applicatio? Jesus died for me? for my people? for Sri Lanka? for the entire creation? I would rather dub it applicatio, depicting Jesus Christ as pro me, pro the people of Sri Lanka.

As you can see, the line between symbol stealing and applicatio is not a sharp one. Who draws the line: the artist or the viewer?

A Symbol Theft by the NRA? 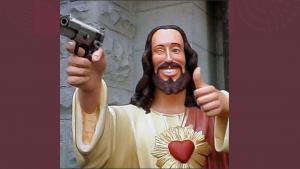 Even though this painting, “Christ as Poor, Black, Death Row Inmate”  by Marylyn Felon, predates today’s Black Lives Matter movement, it shares the spirit. This rendering of the condemned Jesus  illustrates applicatio. The Theology of the Cross posits that God experiences on the cross of Christ what you and I experience when marginalized, wrongly accused, abused, and forgotten. 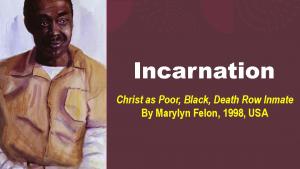 My task here is not to resolve the controversy at the Catholic University of America. Rather, my task is to point out the subtleties and ambiguities of interpreting iconography and art. When a Jesus-substitute steals the sacred power of the Christian symbol and employs it for an ideology, the pious devotee has a right to shake a fist and holler, “Blasphemy!”

Yet, this side of blasphemy, we fully expect the Theology of the Cross to express God’s identification with each of us in our historical contexts because the gospel message is addressed to us. If the gospel is pro me, then we could expect our iconography and art to be pro me.

About Ted Peters
Ted Peters is a Lutheran pastor and seminary professor. His fields of teaching and writing include public systematic theology as well as the dialogue between faith and science. You can read more about the author here.
Previous Post 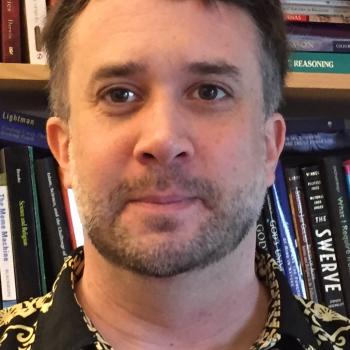