Catholics have been acting like it’s a full moon lately on social media, blogs, etc.

It’s no coincidence that this tweet has been one of my most popular tweets in a while:

Geeze. Catholic social media lately… Suggestion: Step away from the keyboard, take a breather & get some prayer time in. #itshairyoutthere

I’m not sure if it was the synod that got people really worked up, but it’s like a big ol’ Catholic fist fight out there. (And believe me, I don’t consider myself above it all; I’ve jumped in the fray one too many times too!)

Everybody has their fangs out lately.

Maybe it’s because Halloween is approaching…

All I know is that I hope potential Catholics aren’t watching.

Anyway, I wrote something after Elizabeth Scalia got hammered for writing a piece in which she did some wondering out loud about issues that have come up in the synod. I’ve been reading Elizabeth’s writing for a long time. I know she is orthodox. She pretty much has to reassure people of it until she is blue in the face, (I can relate). But for some reason, people seem unable to give others the benefit of the doubt lately, or to view what they say and do in the most positive light possible. It seems that we immediately jump to the worst possible interpretation. Maybe Elizabeth used some bad judgement in her piece. She said as much in her two follow-up pieces. But the way people reacted was a bit disturbing to me.

So I wrote a piece about it.

Perhaps in some cases, people need to view Church affairs with a healthier dose of suspicion and caution to avoid naïveté—that is how quite a few people responded to my piece in the National Catholic Register, and perhaps in some sense they were right.

But perhaps others need to relax a little and not always read encouragement to trust in the Spirit as loosey-goosey liberalism. Sitting back, refusing to worry and putting our trust in God (as Jesus tells us to do) is not the same as putting one’s head in the sand.

And, if anyone wants to join me in prayer for peace and more charity and unity among all of us, I’m sure it couldn’t  hurt! 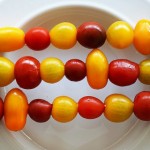 October 30, 2015 Novena for the Media (and Help the Nuns!)
Recent Comments
0 | Leave a Comment
Browse Our Archives
Follow Us!