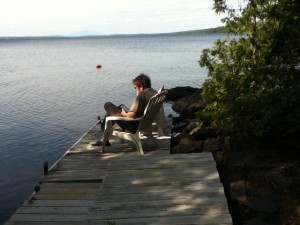 I took a vacation last week.  And I got to spend much of it at one of my favorite places in the world: Schoodic Lake, in Lakeview, Maine.

My family has been going there since the mid-sixties, when my grandparents built a “camp” on the lake.  My grandfather had lived his whole life in Maine.  He was a farmer’s son who started out as a truck driver, then worked his way into sales. He raised four kids during the Great Depression, and sent them all to college, too.  In fact, each of his children went on to earn a graduate degree, and to excel in their professions: college professor, nurse, teacher, lawyer.

The postwar years were good to my mother’s family, and to a lot of families.  Lakeview, home to a spool mill that closed before the war, found a new life as little home-built cabins sprouted all along the shore, my family’s among them.

My father and my uncles helped my grandfather to build his camp from a prefab kit, and the cabin’s four rooms were all open to the rafters above.  When I was a girl, quarreling with my younger brother over who got to sleep in the top bunk, I would fall asleep to the sound of the grownups chatting in the main room, and I would wake up to the sound of the waves slapping against the rocks outside my grandparents’ bedroom.  The bathroom was an outhouse–I have no fear of a well-kept outhouse, and while I never had the job of “knocking over the pile,” I sprinkled my lime with the best of them–and on chilly mornings, my family would fire up a cast iron kitchen stove kept for just that purpose.  Actual cooking took place on a gas range, and there was water piped up from the lake, though our drinking water came from a cast-iron pump up in town.

Over time, the lake grew more popular, and the camps became more elaborate. The Seventies saw lots of new screened porches, additions, and indoor plumbing wherever it could be done within the gradually stricter 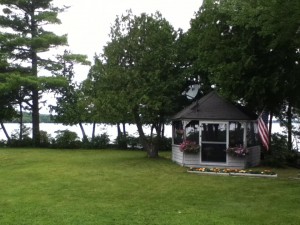 environmental rules.  Tent platforms and cabins sided with sticks were replaced with small houses, some of them two stories high.  Garages were built to store boats and ATVs.  Rafts that had floated atop rusting oil drums and wooden docks padded with discarded canvas fire hoses were upgraded to shiny new aluminum ones from specialty businesses; worn out inner tubes were replaced by Jet-skis, and by my senior year in high school, my parents bought a camp of their own, a tiny ranch house well back from the lake that had actual indoor plumbing and a boat well “grandfathered-in” under regulations that no longer allow such disruptions to the shoreline.

My grandparents’ cottage was sold years ago, but my parents’ camp remains.  Over the years, they’ve added rooms, renovated the kitchen and the bathroom, and even added a real, drilled well. Theirs is a small jewel of a house on a clear treasure of a lake.  Mt. Katahdin is visible from the rocks on a clear day, and my parents pick blueberries from their own bit of lake shore all summer long.

I love that lake.  I live far enough away from it now that I don’t get to visit it often. My parents love the lake too, and also the small community of camp owners who spend their summers there.  Many are retired people.  Some–fewer with the years–are Mainers like my grandparents, people who bought or built their cabins early, before the price of lakefront property jumped so high.  Others come “from away” and while there are still plenty of working class people who own property there, there are fewer every year.  Lakefront property is expensive now, and times have changed.

But the lake is still beautiful, and the community around it is beautiful, too.  I don’t mean just the scenery.  I mean the way people keep tabs on each other, take care of one another.  Sometimes it seems like my father and 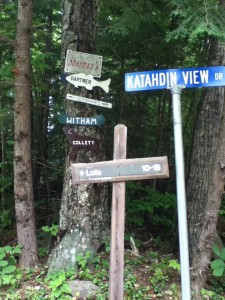 Arthur, his neighbor at the lake, are competing to see who can mow the other’s lawn the most over the a summer.  People stop by with a loaf of fresh zucchini bread or a plate of cookies.  They share vegetables.  The smile and wave at you as they pass you by boat or by car, whether they know who you are or not.

After all, if they don’t know you yet, they probably will soon.  Or you’re a relative of someone they know, just passing through.  Everyone is welcome.  Everyone is a neighbor.

And they show up for one another, investing real time and energy in caring for each other.  This year, for instance, my mother told me the story of a camp that is being sold.  Everyone is sorry; its owner, a man with ALS, cannot manage it any more.

As part of the sale, this man had to have a new driveway put in, separate from the one he’d always shared with the camp next door.  Trouble was, with all the heavy rains we’ve been having, the new driveway kept washing out.

So the neighborhood mobilized. Knowing, as they did, that this was a hard time for this guy, his neighbors just chipped in and came up with a solution: without so much as speaking to the owner of the camp, they regraded the road by his house.  They rebuilt the driveway, and they rebuilt the side of the road, hauling in huge rocks to build a water bar, so the driveway would never wash out again.

I saw those rocks.  They were big rocks.  It must have been quite a project.  I don’t know if they even notified the owner that they’d done this–they just made it a little easier for him to sell, since that was what he needed to do.

I ask myself why this community did this, and I think I know.  They did it because they’re just genuinely nice people.  They just have an instinct for being kind.

Why sad?  Sad because I’m pretty sure many readers won’t agree–and that they have reason not to agree.  Most of us do not live lives that convince us that the default setting on human nature is kindness.  Most of us do not live surrounded by people whose first instinct toward a stranger is friendly interest–a wave, a smile. Most of us do not live at Schoodic Lake, or at places like it.  Most of us will never get the chance to live in a place that is beautiful, stable, and free from want.  And if those are not necessary conditions for cultivating human kindness, they sure make it easier.

Schoodic Lake is beautiful.  But too often, beauty seems either reserved for the very rich, or to come with a price tag  of grinding poverty for the rural poor.  Fewer and fewer people in my culture seem to have beauty in their daily lives; the jobs are in cities or suburbs dominated by strip malls.  Affordable housing seems restricted to battered trailers or deteriorating city cores.

Schoodic Lake is a stable community.  People come back summer after summer, for years or even, as in our case, generations.  And I know families that live like that–but very few.  We chase jobs, move away, move across country, desperately seeking a living wage, an affordable home.  Few of us have much choice in where we live, except for the very wealthy or the voluntary poor.  Rootlessness is the norm, even among Pagans, in spite of our theoretical love for the land.

And then, Schoodic Lake is a comfortable community.  I don’t think there is much actual wealth at the lake; it’s not Bar Harbor or Newport.  But people generally have enough.  No one is desperate.  No one is hungry.  And no one fears that their neighbor will break into their home and steal their possessions, or that they will be subject to violence when they step over their threshold.

Schoodic Lake itself is precious.  But these things about life at the lake have become more than precious–they have become rare.  All these things seemed to me perfectly ordinary, perfectly normal qualities of being alive when I was a kid.  They seem that way now to the men and women who summer at the lake.  And they should be.

I love Schoodic Lake.  I am grateful for its place in my life.  But this week, with news stories about Ferguson, Missouri and a militarized police force in the news, I cannot pretend I’m unaware.  This story of mine, this story of childhood memories and the kindness of neighbors has for its foundation something invisible, something painful to admit I can see: privilege.  Racial privilege.  Economic privilege.  It’s just the way it is.

Yes, my grandfather worked hard for everything he got, and so did his four children.  And I honor and respect that hard work.  How could I not?

But how many men and women have worked just as hard over the decades, and not been rewarded for that work? How many people work that hard now, and under our nation’s widening economic inequality, find themselves less able to secure for themselves than ever the conditions that Schoodic Lake has in such abundance?

How much harder has it become for everyone, regardless of race or class, to achieve the conditions that allow that instinct for kindness to flourish, to be seen as what I am  convinced it is: the natural condition of the human spirit?

Pagan writer Yvonne Aburrow says that what we should understand by the word privilege is “the rights that everyone should have but that some people are denied.”

I love Schoodic Lake.  And I love what it does to the hearts of those who summer there.  But it is not enough. I want there to be something like Schoodic Lake available for everyone.  I want hard work like that of my parents and grandparents to pay off, not just for a few people, graced by their place in time or their individual circumstances, but for everyone.

I love the sanctuary my family has found, in one of the world’s many beautiful places. I just can’t pretend that beauty is freely or fairly available to all.

September 7, 2014 What Do You Mean, "God," Cat?
Recent Comments
0 | Leave a Comment
Browse Our Archives
get the latest from
Pagan
Sign up for our newsletter
POPULAR AT PATHEOS Pagan
1