Toward a Daily Spiritual Practice

When I was sixteen, I learned to play the guitar.

At first, I had a steel-stringed monstrosity from a discount store.  I remember how the strings had too much play in them, and they would cut my fingers until they bled.  But soon I’d saved a little money, and I was able to buy a second-hand Goya, and that guitar and I became close friends.  For almost two years, anywhere I went, the guitar went, too.   I worked my way through the instruction book I’d been given with that first guitar, and I picked up scraps of sheet music and chords that I could play with songs I already knew, and I badgered a lesson or two from a friend of a friend.  I played for my parents and their friends, I played and sang for the high school talent show.  I wrote love songs when I was in love, and sad songs when I was sad.  I played outdoors on the rocks at the lake in Maine, and by the wood stove after a day of skiing in the Berkshires.

Did I play every day?  Probably.  Did I care about that, or have a goal I was working toward as a musician?  I don’t believe I did.  I just played, whenever, wherever, because I wanted to.

I never became especially good.  But, while I wasn’t playing carelessly,  that was never, somehow, the point.  I played because I could become lost in it, because it gave me a glimpse into an entirely different way of being myself.

I suppose it mattered that, while I was playing a challenging piece of music, there was no room for self-doubt or anxiety.  But mostly, what mattered was the flow of what I was doing, the sheer sensuousness of being taken over by the practice of making music.

I didn’t practice because someone else wanted me to, or because it was going to make me famous, or a better person.  I didn’t get up at a particular time of day, or make resolutions about my playing; I just did it.

And maybe it was daily.  Probably. But I never kept track.  I never needed to.

When we are in the midst of a spiritual practice that is wholly right for who we are, ideally, it is a lot like that.  We engage in our practice for the sheer satisfaction of our chosen activity, for hours or moments, once a day or once a week, or a dozen times an hour.  Our practice becomes part of who we are, how we experience the world.

Unfortunately, a lot about our lives is not ideal.  And perhaps it says something that I no longer play the guitar at all, and yet, I do still have a spiritual practice.

When my daughter was six months old, I discovered Paganism–Wicca, to be precise.

At that time, I was living in a somewhat battered second-story apartment in Randolph, Vermont.  Just outside the living room window was a tiny scrap of a deck with no railing and a precipitous drop to the hillside below.  The Third Branch of the White River ran through the ravine behind the house.  In springtime, its thunder shook the ground.

I remember how I sat, out on that narrow deck, listening to the river and nursing my daughter as I first read Drawing Down the Moon, and discovered that there was a name for what I was.  Pagan.  I was a Pagan.

By the time the snow began to fall, I had learned enough to have begin a practice on my own.  Every morning, while my infant daughter napped, I meditated, listening to music or paying attention to my breath.  At night, when she slept, I lit candles, cast a circle, invoked the gods.  I did my reading–or my trance work, or divination, or whatever I was learning–inside the cast circle.

Did I have a daily practice?  Maybe.  Probably, and more than that.  But I didn’t get up at a particular time of day, or make resolutions about my practice; I just did it. And once again, I could lose myself in another way of being, and it was itself so deeply satisfying I had no need to count the days.

But spiritual practice is not always like that.  My daughter outgrew naps, and I began to work full time, then more than full time.  The pockets of free time that had been part of my life disappeared.  It’s much harder to remember your dreams when the alarm clock jolts you awake each day, and hard to focus on your breath when a toddler is looking for you, or dinner needs to be cooked, or the phone call must be answered.

Effortlessness is one of the shapes spiritual practice has.  But without the luxury of time, routines are important to sustain a practice over decades.  Still, a practice that has life may be a practice that flows and changes over time.  There’s a dynamic tension here, between discipline and flow, and both experiences have their place.

During the school year, it sometimes seems as if my life is one uninterrupted interruption.  Contrary to popular belief, teachers don’t go home when their students do, and it’s a rare week I put in fewer than fifty hours, between teaching, grading, and prep.  I let a lot of housework slide, during the year (don’t visit me expecting tidiness between September through June) and I rarely see my friends, but even the minimum of housework, family life, and sleep fills up my days and somehow overflows them.  For ten months of every year, my life is hurried, and I am tired.

During that time of the year, I have very little time for spiritual practice, and I’m apt to be resentful of anyone who prescribes me more.  I get my meditation time in a moving car, driving to my job.  Some days, I am flooded with Light, and I pull up to the parking lot outside my school full of peace, recharged with compassion and ready for the day.  Some days, I am barely able to keep myself from snarling at other drivers on the road.  But the regularity of it gives me something of an anchor.  It is always something I come back to.

In the summertime, I have no morning commute.  Two years ago, my husband and I both discovered that during the summers, the lack of a daily schedule was leaving us drifting in the summers, forgetting to practice between one full moon and the next, between one meeting for worship and another.  We were both unhappy with that, so we began a practice together, of sitting on our front porch for silent, waiting worship… or for journaling, or in some form of Quaker or Pagan lectio divina.

This year, though, our lives have taken us in other directions.  Peter’s parents are moving in next door, and Peter is spending a good deal of time away from home, preparing for their move.  We have had some of those morning meditation sessions together, but at other times, we have been far apart.

At the same time, this year, unlike previous summers, has held an unusual number of those quiet pockets of free time and even solitude for me.  Like the days I spent hunched over my guitar, my spiritual practice this summer has sprawled across my time, like a cat sprawled over a Tarot spread.

Some mornings I am on my porch.  Some days, I bring offerings of sage and lemon balm, or bread, or berries to the icons in their outdoor shrine.  Sometimes I read in Faith and Practice, or walk beneath the trees.

Every day, I walk bare-footed in my garden, feeling the grass against my feet, the dirt on my hands, the wind on my face.

Sometimes a spiritual practice looks like discipline.  Sometimes, it is as easy as a breath.

Do I practice every day? Sometimes, the question does not matter. 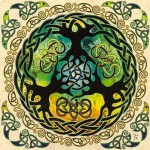 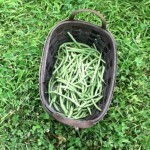 July 28, 2015 The Value of a Garden
Recent Comments
0 | Leave a Comment
Browse Our Archives
get the latest from
Pagan
Sign up for our newsletter
POPULAR AT PATHEOS Pagan
1