Walking through Grief and Loss

I should not have been surprised that my last post touched a nerve; not only is it Black November, but grief knows no season.  That’s the thing about loss as universal: in any community, someone is grieving today.

As someone who used to do grief counseling for a living, I should have remembered that.  It is one of the things I have learned about grief; within a community, it’s never an abstract notion.

Working with death and dying, back when I was a counselor, taught me a lot about how humans grieve.  Aging and loss have taught me more.  It occurs to me that it might not be a bad idea to put some of the things I’ve learned into words;  if it is true that someone is always mourning a loss, it’s also true that any hope or comfort we can offer will always be useful to someone, too.

It turns out, for instance, that it is not futile to learn about grief.

In fact, it turns out that we get better at grief with practice.  Grief is hard work, but it is also a skill, and one that improves with use.

Not that any of us want to have many opportunities to practice this skill, but there is a grace that can be mastered when you walk through loss again and again.

I am thinking now of one friend in particular, younger than I am, who has lost father, brothers, mother, and wife.  She has lost every member of her immediate family, and certainly it has been a heavy load for her to bear.  But while she misses them every day, there are times she takes my breath away: something about her unflinching honesty about the sadness she feels; something about the kindness she brings to those around her, even as she mourns.

That’s another thing I know about grief: the kindest of us, and those who have a lifetime’s cultivation of seeing and appreciating the kindness of others, they are the ones who cope the best with grief when it comes.

“Thank you for coming,” they say at the memorial, and with sincerity.  “Thank you so much,” they say to the small offerings we bring them: food, flowers, a picture of the one who died, a listening ear or a hug.

“That is so sweet,” another friend of mine exclaims, over and over, when anyone expresses their concern for him in his grief.  “That… is so.. sweet,” he says again, when I tell him that I love him, that feel protective of him in his sorrow.

Here he is, his world has ended, and he is putting his heart and soul into reflecting back love at every one of us who visits him in his sadness.  Of course it makes us all love him more–but, also, I know from my years of grief counseling that it is helping him to heal, moment by moment, kind act by kind act.  Gratitude is a balm for grief.

It doesn’t come naturally for all of us, of course.  I will admit it: I’m not naturally kind or generous in my grief. I sometimes refuse to accept it, emotionally, when someone I know dies.  I can be graceless at times.

I remember, for instance, how I responded when I learned that a man I cared about had died–had self-starved to protest world hunger.

Yes, he had debilitating Parkinson’s disease.  Yes, he was confined to a nursing home, and yes, his wife had already died.  His quality of life was not good, and it was not going to improve.  And yes, I completely understood–intellectually–how a man whose entire life had been spent in service of others might choose the manner of his death, in order that it should have some final grace note of meaning.

Intellectually, I knew all that.  But grief is not an intellectual thing.

I was angry.  The mere notion that a man of such profound compassion could think for one minute that the world would be better without him than with him made me want to shout at him.  Try as I might, I couldn’t overcome my anger.  I thought I was handling it well…until my supervisor at the clinic where I worked called me on the carpet for how rude and critical I’d been all week, to everyone around me.

A psychotherapist, a woman whose job it was to make room for the emotions of others by working through my own, I’d been walking through that clinic punishing people for my feelings of anger and loss.

So I have to own the truth: I am an angry griever.  I understand that way of responding to loss from the inside.  And I know how, on one level, my anger makes sense: when we lose someone  important to us, we’re emotionally overwhelmed in a way most of us haven’t been since we were toddlers and our mothers went away and left us with strangers.

Abandonment is forever, when you’re two.

When we are babies, every loss destroys our world–our lives are so short, we haven’t yet formed any such concept as “temporary.”  But we learned.  We grew.  And now that we’re big boys and girls, only the biggest of losses can do that to us.

The death of someone we love? That loss is so large, we have no defense, no shield against the grief.  Once again, we are like children left all alone in the world.

Still, grief is a skill, and there are things we can do, those of us who aren’t naturally generous or kind when we mourn. Some things do help.

What I’ve learned that works best for me is this: make your life large.  I don’t mean that we should distract ourselves from our grief with endless hurry and endless projects, but rather, we need to craft lives that are large enough, have people enough in them to love, that even in the deepest grief, someone, in some part of our lives will give us a reason to be glad–at least for them, even if not for ourselves.

I think back to the darkest period in my own life, for instance: a time when I was desperately worried about my child.  I was helpless to change her life, to fix what was broken in it.  I could not make her well.

That was the year Massachusetts approved same-sex marriage equality.  And I thought of my friends and family who were gay, and I wept grateful, healing tears.  And that was the year that my friend Laura adopted first one, then two, and finally three children, from foster care and from overseas.

When I think back to that period of my life, I can still feel the heaviness of my fear and my grief, like a weight on my back.  But those memories are mixed with the memory the first time I met my best friend’s son, and the look in all their eyes that day.

On the days I was not sure how I could keep on breathing in and breathing out, the thought of my friend and her children was what got me through.  When my heart was broken, their happiness carried me through, until it could beat normally again.

Friends are our life support, it turns out–and not even for what they do for us, when we grieve, but for what we can see in them.

Grief is inevitable.  Anger and fear–at least for me–seem to be inevitable, too.  But we can build lives large enough that there will be enough of Light, if not to swallow the darkness, at least to show us that it is not infinite.

After all, Langston Hughes probably said it best:

Folks, I’m telling you,
birthing is hard
and dying is mean–
so get yourself
a little loving
in between. 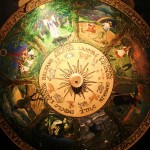 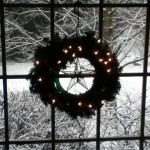