How to Have a Perfect Yule

How to Have a Perfect Yule December 10, 2015 Cat Chapin-Bishop

It was twenty-five years ago:

Coming through the door, we stamped snow off our boots and were hit with a wall of noise.

There must have been fifty people crowding the farmhouse that night. Some were locked in conversation, clustered in twos and threes.  Toddlers careened across the room at knee level, and out in the kitchen two guitarists and a drummer hunched over mismatched chairs, their music lost in the general roar.

A wish-net filled with lights and tokens hung over the battered sofa, potluck foods were laid out in heaps, and the wood-stove cranked out needless heat. Hats and boots and mittens steamed in the entryway, friends greeted each other with hugs, and a man I’d never met before pressed lyrics into our hands.

Outside under a dark sky studded with stars, the snow was too cold to make snowballs; inside, everything was laughter, and light, and noise.

We sang the songs, we lit the candles, we called back the sun. At the end of the night, we took home a candle apiece to keep watch for us over the longest night.  Peter and I bundled my sleepy daughter into the car and started the long, winding way home in the dark.

It was my first Solstice in Massachusetts, and it was the perfect Yule.

Time passes; ten years later, my daughter was almost grown, and I had become a new teacher, overwhelmed at work and at home:

Solstice Eve, and I am stuck in traffic.  It is my job to light the family Need Fire, the fire to carry us through the long night, but the faculty meeting ran long, the days are short, and the sun is setting already.  Disaster!  I am a terrible Pagan–a terrible wife, and a terrible mother.

Crestfallen, I finally get home in the dark.

Seeing my anguish at “ruining Yule,” my husband and my daughter confer.  How can they turn back time, and find a flame that was burning before the sun went down, and is burning still?

The hot water heater has a pilot light, they realize; it may not be glamorous, but it has kept the year’s fire alive!  After some rummaging to find the last of the candles, they head down the stairs together.  Minutes later, they rise up from the basement triumphantly, to kindle our altar’s flame.  And I am in tears.

All my fussing, all my worry, all my trying to Make Yule Happen, and it happened as simply as that.  There they were, my family, teaching me, taking care of me.  The Light never really goes out.  In the time of the Dark,  we can rely on each other.

Nothing was ruined–and it was the perfect Yule.

We were still wobbly, still weak.

Peter and I had been sick–we’d been so sick, with one of those epic strains of flu that left us barely able to toddle to the bathroom and back, over and over again.

We were too sick to put up the tree.

We were too sick to wrap up the presents.

We were too sick to make cinnamon buns, or oyster stew, mulled cider or apple pie.  We barely had the strength to light our candles on Solstice Eve.

The next day, on the solstice itself, somehow we put up the tree. We perched the sun at the top, and had to lie down and nap.

The next day, we managed the ornaments.

Slowly, gradually, we caught up with some, though not all, of our yearly traditions.  (I never did roast that bird.)

By the 26th, we emerged from the house for the first time, blinking against the bright sun on the snow.  We drove downtown together, to try on funny hats in the comic book store, and to stagger next door for Chinese food.

We were weak, we were sick, we were tired… and it was the perfect Yule.

Over the years, as my community and my family have grown and changed, our Yule traditions have changed with them.  Things that started as short-cuts borne of necessity, like my annual rendezvous with my parents for a gift exchange over lunch, have become new traditions: every year, I look forward to our annual walk on a wintry beach, and our lunch looking over the waves.

Last year, the menorah was lit on our altar, next to our solstice tree.  Neither one seemed to mind.

The ancients tracked the seasons with clocks of stone, with megaliths, and they lacked the accuracy of a modern quartz clock.  These days, we allow our Yuletide to slump a little, to blend, to make way.  We are not perfect, and I am slowly learning not to attempt to be.

I think that maybe I’ve grown up at last, and I finally understand: it isn’t the shape of the tree or the form of traditions that make a solstice perfect.

Families change.  Traditions evolve; we craft some that are new, and others we must lay aside.  After all, that is what Yule is about: Renewal.

Some things must change… but some are forever the same. 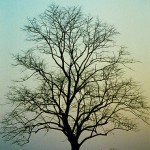 January 7, 2016 On Nature, Human Ugliness and the Problem of Evil
Recent Comments
0 | Leave a Comment
Browse Our Archives
get the latest from
Pagan
Sign up for our newsletter
POPULAR AT PATHEOS Pagan
1