Living Life With The GPS Off

Living Life With The GPS Off July 5, 2015 Rabbi Ben Greenberg

When is the last time you got lost? I don’t mean you missed a turn that you should have taken and you experienced a short inconvenience. I mean genuinely seriously lost, as in stuck on a back mountain road with no idea where you were and the sun was quickly setting.

I can remember the last time I got lost.

I was on my way to visit my then fiancee, now wife. She was working for the summer in a camp near some small town in Pennsylvania. I was working at an internship in Chicago. I printed out all the directions I thought I would need and began the drive east. Most of the drive was easy of course. All I needed to do was stick to the highways. It was when I finally got off the main roads, only a few miles from the camp, that I got really lost. The directions at that point started telling me to do things like “look for dirt road three houses after the the wooden sign in the road for the general store.” It took me a bit of going back and forth, asking a few people for help and stopping frequently to find various points along the way but eventually I made it. 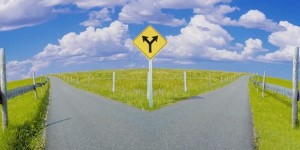 As I began just another routine car trip this past week to a destination not far from my home but somewhere I had not been before, it dawned upon me that the summer of visiting my now wife was the last time I ever got lost while driving. It is practically impossible to get lost now. We don’t even need those clunky GPS devices anymore. All we need is our phone and a good battery, or at least a good charger. So it was that as I started my short trip last week to another place I had not visited before I drove there like I was a local.

What have we lost though in always having a GPS nearby? While our travel times have been greatly reduced, is there something we have lost in the process?

Along with that last time I got lost on the road those many years ago, it was also the last time I pulled down my window and asked another random passerby for help. It was one of the last times I intentionally stopped to take in the scenery all around me. It was a time when I needed to focus on the details of the landscape, of the small town surrounding me and of the type of roads I was driving on. I can still remember the winding road right before entering the town and the small locals bar and homemade ice cream shop not far from each other. I can remember the rockiness of that last dirt road leading to the camp and the smell of farmland around me. I can visualize the Amish family that lived not too far from the place where hundreds of young city kids came to experience the outdoors.

In the beginning of the Jewish people’s journey from Egypt to the Promised Land they come upon a fork in the road. They can go straight, the most direct route or they can take a winding path through the desert. The quickest route posed the immediate danger of the Philistines but the long path also posed another type of danger: the unknown. The simplest way of understanding the decision of God in that moment was to choose the danger of a more distant unknown than the immediate and pressing danger of the Philistines. A people just freed from years of slavery only a moment ago would not be able to persevere against such a mighty and early threat to their existence.

However, if you parse the words carefully, something truly interesting happens. The Torah in Exodus 13:17 says “God did not lead them by the way of the land of the Philistines for it was near, because God said, ‘Lest the people think again when they see war and go back to Egypt.’” The language of “for it was near” should strike us as an odd choice of words. Could it not have said “even though it was near,” thereby fitting in with the meaning of the verse in a much simpler fashion?

The Midrash Mekhilta  in contemplating this language choice offers a number of possible interpretations. One of them struck me this week as I reflected on how many years it has been since I’ve truly been lost. Why did God have the people avoid the closest route home? Why not take them the shortest way? The Midrash reflects that God was concerned that if they went into the land right away they would become so self-confident in the homes they would have built and the agriculture they would have cultivated that they would have forgotten the Torah almost immediately. They would have forgotten their purpose. Therefore, God takes them through a 40-year journey through the wilderness of Sinai to imprint the Torah in their DNA so it could never easily be forgotten.

What an incredible insight! God purposefully took us the long way so we would learn to pay attention, to see the details, to not lose sight of the world around us and the bigger picture. Ultimately, the people were not actually lost. There were sign posts along the way and God guiding them along the path. Yet, in choosing the road not yet taken, we are taught the value of turning our GPS off once in a while. Taking our time. Letting the journey sink in. Not only do some of our most lasting memories get made this way but some of our biggest insights are developed while lost as well.

The next time I head for a trip to a place I have not yet been before immediately turning on my GPS app, I’ll start the journey. You never know where that journey may take you.

July 12, 2015 Prayer, Good Deeds and Sacrifices? Explaining The Role of Sacrifices in Judaism
Recent Comments
0 | Leave a Comment
Browse Our Archives
get the latest from
Best of Patheos
Sign up for our newsletter
POPULAR AT PATHEOS Jewish
1

“History will judge us” – Have...
Writing from the Edge
Related posts from Second City Torah