The Evolution of the White Rock Beverage Co.’s Girl

Only one of the other posts in this series hasn’t focused on a toy (The Evolution of Morton Salt & Coca-Cola), but it’s interesting to me for a few reasons:

1. The woman on the White Rock beverages label is from an actual work of (originally non-commercial) art: Psyche at Nature’s Mirror by Paul Thumann. White Rock purchased the rights to the painting and has used it–and variations on it–as part of their logo for about 130 years.

2. White Rock freely acknowledges the slimming of their icon:

“Over the years, depictions of Psyche have changed slightly. The 1947 model was estimated to be 2 inches taller but 15 pounds lighter than the original model. The 1975 model added another 2 inches but dropped 7 pounds and now stands at 5 foot 8 inches with a weight of 118 pounds.”

Okay, so let’s do the math:

At the risk of sounding like a skipping record (I miss records), why are the images of women–even on mundane things like bottled water!–always getting unrealistically, unhealthily thinner?

This affects people! Every week, people tell me about little children–I’m talking preschoolers, here–who are “afraid” of getting “fat.” I can’t help suspecting the endless images of unrealistic thinness everywhere are part of the reason.

And now for the pictures: 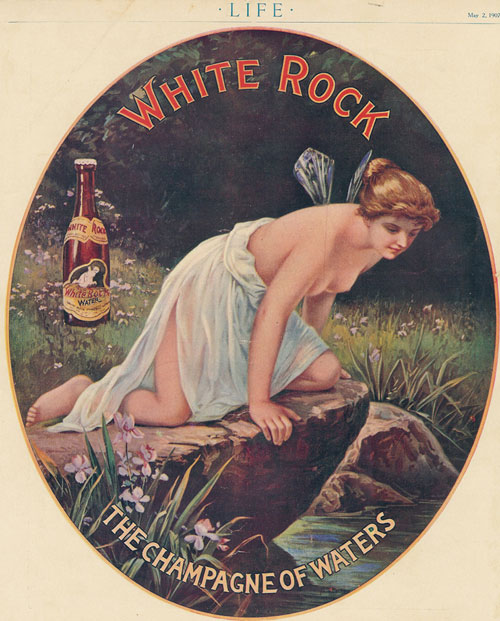 It’s not that someone’s going to look at a bottle of White Rock and get an eating disorder. It’s just that images of idealized thinness are so ubiquitous, I fear they are becoming normal.

May 14, 2012
Reason, Compassion, and The Need for Darn Good Storytellers.
Next Post