I’m the author of Eat With Joy: Redeeming God’s Gift of Food, published by InterVarsity Press in February, 2013.

Here are ten reasons you or someone you know might like to read my book. And here are ten more just for good measure.

(You can buy it from the publisher, at Hearts & Minds Books, Amazon, Powell’s, Barnes and Noble, Christianbook.com, or wherever it is you buy books. And if you’re not the book-buying type, you can ask your library to stock it.)

I’m also the author of a book about Jesus for children called The Unexpected Way. It’s the third in a series launched by Peter Enns. The publisher is Olive Branch Books, a division of Peace Hill Press, which produces quality educational materials for children.

My writing has appeared (and reappears) in places like Christianity Today, Sojourners, Books & Culture, The Huffington Post, The Christian Century, RELEVANT, Catapult, The Suffolk Times, PRISM, The Progressive Christian, Creation Care Magazine, and Flourish Magazine; one of my essays appears in Bella DePaulo‘s book Singlism, in the brand-new Talking Taboo: American Christian Women Get Frank About Faith, and in the forthcoming devotional book for folks who generally dislike devotional books, Disquiet Time.

I tweet @rachel_m_stone, and one day in October 2013 I started what briefly became the #1 trend on Twitter: #AddaWordRuinAChristianBook. It was very funny while it lasted, and I’m telling you this because where else am I going to brag about such a pointless and ephemeral thing? 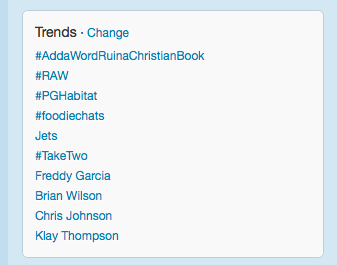 I live near Philadelphia (actually in South New Jersey, but “near Philadelphia” makes me sound cooler) in a 120 year old house that I love, with my husband, Tim, who teaches at Eastern University in St. Davids, PA. We have two Lego-obsessed boys, an African-German Shepherd, and a Siamese-mix-rescue Super Cat.

My masthead is indeed a sideways picture of me holding a blanket I made, with my signature wild tights peeking out from the bottom. I made this blanket out of scraps of old jeans, and I think that writing is often like that blanket–scraps we’ve taken from things gathered here and there, patched together into something that’s useful, and maybe even comforting.