Mainstream economists are befuddled by a worrisome trend: since the late 1970’s, even as worker productivity has continued to climb, wages have stagnated or risen at much lower rates. Historically, wages and productivity had always been closely intertwined; why is this happening?

Most of these economists point unsure fingers at factors such as globalization, income inequality, and diminished union membership. They are at a loss, however, to go a step further and explain why those things happened when they did, and why they continue.

It’s amusing seeing these bourgeois economists struggle with this. Bloomberg View even went as far as stating: “No one has good answers.” 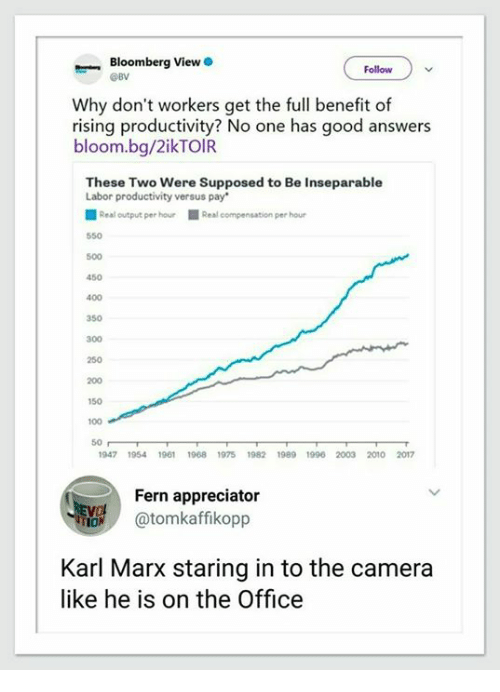 To understand this problem, we need to get into some Marxian economics. These theories are laid out variously in Das Kapital, Grundrisse, and Wage Labour and Capital.

For Marx (as for every economist before him, including Adam Smith and David Ricardo), value comes solely from labor. This is a hard concept for people unfamiliar with it to grasp, because value is not the same thing as price and because value is qualified by a concept called socially-necessary labor time, but it becomes very simple when you actually think about it.

Imagine a theoretical prehistoric economy of cavemen. Ug wants a rare stone that can be used as a hammer, and Og has such a stone. Ug offers to trade a stick he found in the woods for Og’s stone, and Og laughs at him. If he wanted a stick, he could just go into the woods and get one for himself. Ug, being a smart caveman, understands that his stick has no value to Og because it’s just a stick, found plentifully in nature. So Ug undertakes to perform the labor to sharpen that stick into a crude spear. He trades the spear for the stone hammer and both Ug and Og are happy.

It’s patently obvious that the difference between a valueless stick and a valuable spear is the labor enacted upon it – Ug’s labor transformed the raw material (means of production) into a valuable commodity that could be traded.

In Marxian economics, the value of a commodity is the sum of two factors: living labor and dead labor (corresponding with variable capital and constant capital respectively). Living labor is the work the laborer expends creating the commodity. Dead labor is the labor embedded in the raw materials used in the creation of the commodity, the labor that previous workers put into collecting, shaping, and preparing those raw materials. Dead labor is transferred from the means of production to the finished commodity in the labor process:

To use another simple example, consider this spinner – she has at her disposal cotton and spindle with which to create yarn. She spins a ball of yarn in one hour. The value of the yarn is the sum of the value transferred from the cotton and spindle – the dead labor – and the new labor she performed in the spinning process.

It is important to understand that even on a macroeconomic scale, all value still derives from labor. This is important because bourgeois economics tends to conflate “value” with “money” – a CEO signing a deal to purchase another company and sending shares of her company skyrocketing is not creating value in the Marxist sense, she is only creating money. Imagine an economy with no production – nobody is creating any physical goods. You can’t, because such a thought is absurd. The production of goods and services is the only thing that creates an economy, and all speculation is built upon it.

Now, profits are the result of appropriating the surplus value created by living labor in the production process. Take our spinner – she spends eight hours spinning yarn using cotton and spindle owned by her boss. Her boss then takes the yarn and sells it for a profit. How does he make this profit? Obviously he has to sell the yarn for greater than the total he spent on the means of production (cotton and spindle), but he also had to pay our poor spinner a wage. Were he to pay her an equivalent to the value she created during her ten hours’ labor, he would only break even.

To make a profit, our capitalist has to cut his expenses – he has to pay to the spinner, as a wage, less than the value of the labor she performed. He pays her enough so that she can eat and have a roof over her head and be of sound body to continue working, and not a cent more unless he is forced by a government or trade union. Every cent more than that, he keeps as profits.

Unfortunately, this theory, which is called exploitation, is controversial. It shouldn’t be. We have seen already that the difference between a raw material found in nature and a commodity with value is simply labor. If profits come from value, and value comes from labor, then profits come from labor.

Now, what would happen if a technological breakthrough drastically changed the production process for that yarn? For simplicity’s sake, let’s say some brilliant inventor creates The SpinnerTron 2000, a massively improved spindle that cuts the amount of time it takes to create a ball of yarn in half. Now our spinner can create the two balls of yarn in one hour! The spinner’s productivity has risen!

Here is where the problem arises, as well as the answer to the question of the divorce between wages and productivity.

Now two balls of yarn are absorbing the living labor that was previously absorbed by one. Although the ultimate value of the yarn remains unchanged, its constitution has. This is called the organic composition of capital, and in this case it has risen: more value comes from dead labor or constant capital, and less from living labor or variable capital.

Here is the problem for our capitalist: profits are derived wholly from living labor. It is living labor which adds new value, and living labor which wages must be deducted from. Less living labor per ball of yarn means less opportunity for profit; profits may still increase because more yarn is being sold, but the rate of profit could fall.

Marx uses simple math to explain how the rate of profit may fall depending on the ratio of constant and variable capital (edited slightly to simplify):

This is how the same rate of surplus-value would express itself under the same degree of labour exploitation in a falling rate of profit, because the material growth of the constant capital implies also a growth — albeit not in the same proportion — in its value, and consequently in that of the total capital.” –Capital Vol. 3

We see in the above model that as the ratio of constant capital to variable capital rises, the rate of profit declines. This is called the tendency of the rate of profit to fall, and it is arguably the most important concept in Marxian economics.

This concept has been much-maligned and misunderstood by neoclassical economists and even some Marxian economists, so it is crucial to understand that it is only a general model that applies to a general trend over the long-term. Marx also specified many factors that could counteract the tendency in the short-term.

Technology increases are a major driver of productivity growth. The fear of automation has long hung over the heads of average workers, and it is only becoming more pronounced with time. Technology drives productivity upwards, but it also has the effect of driving the rate of profit lower, eventually to near zero.

Enter those countervailing forces, all of which have the same ultimate effect of cutting variable capital (wages). Globalization sent production to countries with no minimum wage where workers could be paid pennies. What jobs do remain in Western countries have seen their wages stagnate and decouple from productivity gains, because if they kept up, the rate of profit would continue to fall.

“The conditions of bourgeois society are too narrow to comprise the wealth created by them. And how does the bourgeoisie get over these crises? On the one hand by enforced destruction of a mass of productive forces; on the other, by the conquest of new markets, and by the more thorough exploitation of the old ones.” -The Communist Manifesto

Wages grew with productivity during much of the 20th century not because they are tied together, but because of a strong social democratic safety net that massively redistributed wealth from the top down. This was never tenable as a long-term solution because of the tendency of the rate of profit to fall; no matter what anyone did, that redistribution had to end in order to maintain capitalism. It is not coming back, and neither are the good-paying jobs. We are entering the final era of this epoch, the era of late capitalism. The rate of profit continues to decline, and the political and economic unrest we are now feeling is but the rushing of capitalism’s biggest, final crisis bearing down upon us.

November 16, 2017
Why I Left A Promising Position with an Up-and-Coming Progressive Media Organization
Next Post 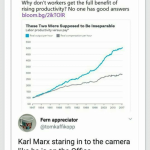