Excerpts from my interview with New York Times bestselling author Frank Schaeffer about his new book Why I’m an Atheist Who Believes in God. (See the Washington Post’s excellent review )

Reba: What does the Post-Traumatic Church Syndrome term mean to you?

Frank: It’s a way of describing what I’ve been trying to write about it my memoirs…the church experience that I came out of had some trauma, and I’ve received literally thousands of emails from people coming out of the evangelical, right-wing, conservative movement, and if you had to put a hashtag on them, your title [Post-Traumatic Church Syndrome] would represent 90% of the stories…

The trauma of leaving isn’t about one experience; it’s the distance of getting away from your roots. There are aspects of earlier parts of your life that you miss, even if they were screwed up—leaving results in a kind of discombobulated rootlessness that no matter how logical the progression of faith away from some crazy fundamentalist faith was, you are now unmoored from something that was once the center of your life. That’s traumatic, even if the change has been a good one.

It’s like people who walk away from abusive relationships. Yeah, it’s a good thing they walked away from it, but that doesn’t mean there aren’t aspects or earlier parts of their life that they miss –even if they were screwed up. So it isn’t simply the leaving, it’s the aftermath of getting used to the new you and trying to cope with that.

Reba: There is a lot of paradox in your book, including the title.  How can the title be true?

Frank:  Simplicity is really a false avenue when it comes to who we are… I’ve never met an Atheist, and I’ve never met a Christian…these labels do not actually define anyone, because none of us are one thing to our core…

One of the things I cite in my book is my Dad’s personal relationship with Billy Graham and how Billy used to tell Dad, “Hey I’m standing up here preaching salvation, and I don’t even know if I believe in it.”Billy was terrified by death… So where is the Billy Grahm “faith” in that? Well, it’s in the same place we’re all in.

We need to quit pretending there’s only one answer, that we’re never going to change our mind, that the formula stays the same.

Saying I’m an Atheist who believes in God is like saying I’m a faithful husband who nevertheless looks at other women…I’m the same guy and I’m not the same guy.

Reba: How can people deal with PTCS?

Frank: The only way to deal with it in some ways is to simply put it aside and say, “I’m not going to try to decide who was right and who was wrong, I’m just going to accept where I’m at now and move on from there instead of trying to find simple answers…Recognize these are traumatic things and deal with them by not dealing with them. I know that sounds nuts, but by simply saying, “Hey, this is where I find myself, I’m not going to replace one set of fundamentalist certainties with another one, you can embrace the paradox…

Some people have to make a full break. But then there are lots of other people who are being given a black-and-white choice—and to those people, which is most people, because most of the trauma isn’t as definite as a rape…most people are walking away with a certain amount of sorrow or ambivalence and questions, and I think it can come as a great relief to them to say, “Look, these are not issues of truth and falsehood…then you can relax and feel free to pick and choose. You can relax and not have certainty yet still be able to say [about a church] ‘I like this place; I can grow here.” You can pray and not know if God or anyone else is hearing that prayer, but still take tremendous meaning from it.

Don’t try to be a Bible-believer or an Atheist or any of these types of things; break it into bite-size pieces, and if that includes going into a church and enjoying that experience without having to decide this is where you belong and all these hot and heavy questions, then do that. And if it doesn’t—don’t. And feel an equal freedom in either direction. I think there a big sense of healing and completeness in not seeking the healing and completeness…look, I had Polio when I was two. I had an atrophied left leg. If I could have spent my life trying to get it fixed and worrying about it .. but there was a great sense of peace after my teenage years when I didn’t care if people saw my withered leg  and wasn’t trying to get anything fixed. So sometimes you can deal with things simply by accepting them and not dealing with them.

If you’ve been traumatized by a religious background, the last thing you need is that absolutist thinking about: “Now how do I solve that?” Instead, you can just say: “Hey this is who I am. It doesn’t have to be logical.”

So, what’s the bottom line?

If there is a God, your creator loves you like I love Lucy, my little granddaughter. And if there isn’t, we’re all on this empathetic journey together, a gift from the cosmos. Either way you’re not going to know. But you can choose how to live so that the next time you look up at your version of Lucy, what you see there is unconditional trust.

And if you can find that…that is the meaning you’ve been looking for all along. It isn’t in the big “Truth” questions. Meaning is in who you are, and what you see reflected back in the eyes of the people who love you most. 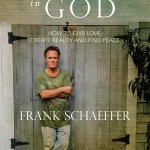 May 30, 2014
Why I'm an Atheist Who Believes in God by Frank Schaeffer (Part One)
Next Post 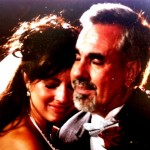