Young-Earth Creationism vs. the Plain Meaning of the Creation Stories

Having recently addressed a number of points of incompatibility between young-earth creationism and Christianity as most Christians understand it and have understood it down the ages, I was asked if I could address the common young-earth creationist objection that  “No one simply reading what the words clearly say would EVER suppose God/Moses were describing a development over millions of years!” 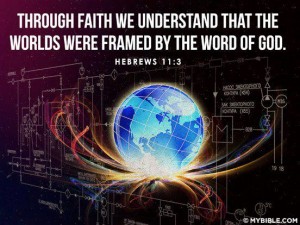 The question of who is thought to be doing the describing is relevant. There is no human being who supposedly saw these events unfold. There is no human author to whom it could be attributed that could simply be describing what transpired. And that is interesting to think about. The text of Genesis 1 is not written as though it is God saying “Here is how I created: In the beginning, when I created the heavens and the Earth…” It is a human being writing about creation.  If one wishes to say that it was revealed to an ancient author in a dream, that doesn’t help make the case for a literalistic approach. From Joseph to Daniel to John, dreams and visions are precisely the sorts of place one encounters numbered lists and symbolic details. And so considering the origin of the information in the story is itself relevant. But at the end of the day, the Bible’s accounts of creation remain the writings of humans about the Creator and creation. The Bible consistently affirms creation as indicating God’s unmatched power, and from the Psalms to Romans 1, it is affirmed time and again that creation points faithfully to the creator. Young-earth creationism denies this teaching. It elevates these ancient human writings above that which those writings themselves say the Word of God brought into existence. It elevates what may be an anthropomorphic depiction of God creating in a working week above the rocks themselves crying out.

If we ask about the “plain meaning” of the creation stories, that has to be the plain meaning for ancient people in the time in which they were written. Genesis was written in Hebrew, in a different time and culture. Skipping the question of whether the “plain meaning” for an ancient person could have been different from what seems plain to us is asking for trouble. This is a point that is embraced by conservative Christians and not just liberals. Context matters – both the literary context and the historical context.

To an ancient Babylonian who was familiar with the Enuma Elish, the account in Genesis 1 would not have seemed to be about the natural world. The cosmos described is identical and nothing about its structure is challenged. The deity who creates splits water to make the sky and sea, and puts a dome or arch in place to hold up the waters above. What would have been significant would have been the idea of a single Creator who creates without rivals, and the demotion of the sun, moon, and stars compared to the importance ancient Mesopotamians attributed to those entities.

To an ancient Israelite steeped in the use of poetic parallelism and the symbolic use of numbers, the plain meaning of the ordering of content in Genesis 1 would clearly have to do with that, setting days 1-3 alongside days 4-6 in a manner that gets the reader to think of the correspondences between them.

To ancient readers who were familiar with the idea of spontaneous generation, they would have understood the text to be endorsing that view, emphasizing that it is God who commands the Earth and the seas to bring forth living things.

To a reader in any era who has not been steeped in the selective literalism that characterizes the modern-day young-earth creationists, the presence of a talking snake would make plain that the text is literally something other than a factual account of a historical event. Unless one is indoctrinated to suspend everything they know about literature and about snakes, then the plain meaning of the text will not seem to be what young-earth creationists insist that it is.

The “plain meaning” of the creation stories differs from reader to reader and culture to culture. No one reading today can simply read the text as its original intended audience would have. We cannot simply think ourselves back into an ancient culture not our own. But we can inform ourselves about the relevant ancient culture and context. And if we fail to do so, we must know that what we come up will more likely than not be something at odds with the meaning that would have been “plain” to its author and earliest readers.

And that, alas, is what young-earth creationists consistently do, resulting in much harm to people’s understanding of Genesis.

March 20, 2013 Young-Earth Creationism is Like Bad Sushi
Recent Comments
34 Comments | Leave a Comment
Browse Our Archives
get the latest updates from
Religion Prof: The Blog of James F. McGrath
and the Patheos
Progressive Christian
Channel
POPULAR AT PATHEOS Progressive Christian
1