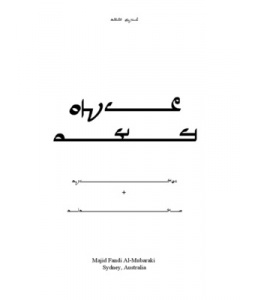 This is a quick translation of this passage from the Great Treasure (Ginza Rba), the Mandaean sacred text. It relies heavily on Lidzbarski’s German translation, cross-referenced with the online Ginza concordance mostly when either the German was ambiguous, or I was curious what the underlying Mandaic was. In most instances when I looked because the German was puzzling, Lidzbarski’s rendering of the Mandaic was problematic, and I sought to offer a better rendering. I didn’t have time to work through the entire text and translate it from scratch, but nevertheless wanted to have an English version available to refer to in a conference paper I’ll be reading soon. The paper is about lightworld visitors to Jerusalem in the Book of John chapters 54 and 76 (my translations of which are available online), to which this story in the Ginza is clearly related.

I called the call of life, and focused on the planting of life.

I talked and discussed with my voice, and woke up the elect in the world.

I cried with a lofty voice, I shook the sleeping man, and made him get up.

I raised up disciples among them, of whom (some) are worthy of the place of light.

Who told Spirit, who taught the deficient and faulty one,

who told the liar that the Stranger (or “Alien Man”) has come here?

Who told Spirit, so that she smacked her hands to her head?

With her hands she hit her head, and tore her hair from her head.

The curls she tore from her head, and cried, “Woe is me, woe is me!”

Spirit spoke in anger, and brought forth lying words.

Spirit spoke in anger and called her firstborn sons together.

She said to them:

“Come, come, my first-born sons, listen to what I tell you.

Come, let us plot evil, and create a sect in the world.

We want to establish a sect in the world

among the tribe of the Stranger who has come here.”

Then the seven stars went to Holy Spirit.

They said to her:

“How shall we found a sect within this world?”

As she said to them:

“Come, let us lie together and take all of our mysteries.

All of our mysteries we shall take, and form a structure.

We want to form a structure, and to build Jerusalem. ”

The seven stars proceeded to lay with their mother.

They went to their mother, and took from their shared mysteries.

They took of their shared mysteries and built Jerusalem.

They built Jerusalem, and let immorality, corruption and fornication enter it.

“Everyone who is based in Jerusalem will not mention the name of God.”

Then the seven stars and Namrus, the mother of the world, arose.

The seven stars rose and came up to her seven chariots.

They came to her seven chariots and went down from the heavens to the earth.

They left this world and arrived in Bethlehem.

Spirit then spoke to her sons, saying to the petty fiends:

“My sons! Land your chariots, we want to build it (Jerusalem) in this place. ”

Then a voice came from the cloud, from Enoch-Angel, and said to Holy Spirit:

365 disciples (or Mandaean priests) will emerge. ”

Then she cried in a shrill voice, and shouted,

she said to her seven sons:

“Up, up, my seven sons, do not build in this place.

A nasty, unclean curse is come upon your chariots.

Sit in your chariots and go away from that place. ”

They went away from that place

Spirit then spoke to her sons,

spoke to the vain fiends:

“My sons! Land your chariots,

We want to build it in this place. ”

and said to holy Spirit

a letter of anger has come to us.

Sit in your chariots and go away from that place. ”

They went away from that place

and came to the place Krakh-Nsab.

“My sons! Land your chariots,

we want to build in this place. ”

and said to Holy Spirit:

and said to the planets:

listen to what I tell you.

before the Great Life comes.”

The seven planets arose and went away from that place.

They got up, sat down in their chariots

and continued their journey in the world.

They continued their journey in the world,

until the wings of their chariots failed.

Namrus, the mother of the world, said to them:

“My sons, land your chariots,

We want to build on this site.

At this place we want to build,

because the way is ending. ”

Then the planets answered,

saying to Namrus, the mother of the world:

“Yes, our strength is inhibited,

and the wings of our chariots have failed.

Yes, we want to do as you have said

and build in this place. ”

and fostered sorcery and witchcraft –

Sorcery and witchcraft they fostered –

and did not call upon the name of God.

They went to it, kneading the first brick,

and built the city of Jerusalem.

and said to Holy Spirit:

Happy is the one to whom God is a helper. ”

They built Jerusalem in which the Jews dwelt.

They gave them the works of darkness, and the seven spoke a blessing over them.

They called upon a protecting angel, fish of the sea and feathered birds,

and summoned them with oaths.

They conjured them with oaths and gave Jerusalem to the Jews.

They spoke a blessing over them, and they found everything they were looking for.

The seven pillars emerged, all of which brought forth perversity and falsehood.

The Jews increased in the desolate waste.

The Jews proliferated, and the time came to create a following.

I assumed bodily form and went into Jerusalem.

I spoke with my voice, arguing and became a doctor for Miriai.

I became Miriai’s doctor, I healed her and she was remade.

I became a doctor of Truth, called to heal without taking wages.

I led Miriai down and baptized her in the Jordan River.

I drew those of pure character.

Miriai of the perfect, Jacob and Benjamin emerged.

The Jews fell into a rage

and killed my disciples who spoke the name of Life.

When I saw this, I was full of wrath and great anger about it.

I rose above it, full of wrath and anger,

and ascended to the Great Life.

I told my father what it was in that place.

I also told him how the seven treated this world.

When he heard this from me, he gave me a letter in anger –

A letter in anger he gave me against Jerusalem.

Who told Spirit, who taught the erroneous and poor one,

who told the liar that the white eagle has arisen over Jerusalem?

She calls together all her progeny and amulet-spirits.

She calls the seven stars, sits down and wails in lamentation.

“Woe to you, Jerusalem, that the eagle has risen up to you.

Woe unto the Jews who are to be slain in anger and rage. ”

Holy Spirit came out and bowed to Enoch-angel.

She said to him:

“By your life, Enoch-Angel, do not desolate Jerusalem, which I have built.”

Then he replied to Namrus, the mother of the world:

“Whoever is an enemy of light, die a second death.”

The Jews, in their fear, hid themselves in the various districts.

Namrus, the mother of the world, says to him:

“Leave me now, I will blow up the gates of the wall above them,

that they will be killed on the spot.

The Jews should be killed, who have sinned against your disciples. ”

Then I beat her with a mace of radiance, as she trembled before me, and said to her:

“Get behind me! I have come in anger.

I’ve come with wrath from Life who sent me.

Life sent me forth in anger, to lay waste to Jerusalem.”

Column by column, I threw it down,

and she rushed out of her place.

I destroyed the column Israel, who persecuted the disciples.

I destroyed the column Jacob, who stood at the gates of Jerusalem.

I threw down the column Adonai, which rose at the center of Jerusalem.

I destroyed the column Zatan, which stood on the outer wall.

I threw down the column Sihmai that stood at the inner wall.

I threw down the column Karkum, that had all the angels within it.

I tied up the great devil, the guardian of Jerusalem.

I devastated Jerusalem, where the blood of my disciples had been.

I killed the Jews, who had persecuted the tribe of Life,

all feathered birds and ugly animals that have emerged from them,

apes and wolves, which have emerged from the Jews,

the evil beasts, my anger was against them.

My anger was against them, and they shall come to an end in the great day of the End.

But my disciples were brought to safety, having endured the persecution in Jerusalem.

I destroyed the house of those who were without goodness. –

And life is victorious.